A program of events featuring a range of artists, curators and architects, who have been invited to participate, collaborate and engage with the gallery space over a fortnight in December. The two-week period further demonstrates the experimental character of Rokeby's program with a specific emphasis on offering the space over to others to re-visit, stage and realise projects. 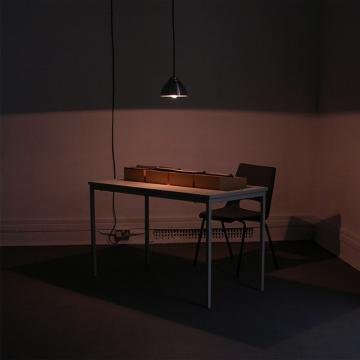 Syndicate is a program of events featuring a range of artists, curators and architects, who have been invited to participate, collaborate and engage with the gallery space over a fortnight in December. The two-week period further demonstrates the experimental character of ROKEBY’s program with a specific emphasis on offering the space over to others to re-visit, stage and realise projects. Beyond this there is no defining remit.

Upstairs will feature a film by the artist Ben Rivers being played for the duration of the program. Rivers engrosses the viewer with his theatrically shot 16mm films. Working with imagery and techniques familiar to ethnographic or documentary films, he uses the personal and surreal to influence his narratives and engage the audience. For Syndicate Rivers will show his 2006 work The Coming Race, where an undulating mass of silhouetted figures are seen in a barren and unforgiving foggy mountain backdrop.

Butchers Projects, an initiative run by curator Cylena Simonds, has been invited to take over the downstairs of the gallery. Simonds has chosen to present Emma Wolukau-Wanambwa’s first solo show in London with her subtle and immersive installation, A Brush for Robben Island, 2007, which combines text, sculpture and sound in a meditation upon a fragment of South African political history.

Syndicate will also feature performances by a selection of artists in differing contexts and environments. On the opening night Bettina Buck will be re-visiting a performance first realised a decade ago. StrokeZoo, 1998, works with limitations and boundaries where instructions and actions question our relationship to the object and subject. Having the opportunity to re-contextualise this work a decade later we are asked to question the recurring themes in Buck’s practice and the power of hindsight and continuum from an archived work.
Doug Fishbone, whose work spans installation, video and performance, places the viewer in an uncomfortable position. Fishbone will present a performance whereby he Ransacks Google Image Search to illustrate — and undermine — his arresting, repulsive and undeniably amusing monologues on contemporary media and our cultural, social and political (sub)life.

Flávia Müller Medeiros will be showcasing an adaptation of a recent intimate performance, which first took place at her studio. The work features an email conversation, taking place between her and a student of the politically displaced European Humanities University of Belarus. The performance will feature a re-reading of the email conversation in the guise of a script with an added layer of dislocated sound being played elsewhere in the gallery. The refraction of the authorial voice goes through a process of being embedded from voice into text and back into a voice once again to be recorded for other purposes at a later date.

WITH, who position themselves as a company that provides a range of life Enhancement Solutions™, will be presenting a new work DYINGFORIT™. Recently commissioned by a client after their solo exhibition at the gallery earlier this year the solution features an agent who will commit a murder on your behalf. Using the forensic science technique Luminol, a flourescent material that 'lights up' hidden traces of blood and organic matter, the gallery will transform into a temporary crime scene.

The Office of Subversive Architecture, an international architecture network, has been invited to intervene in the gallery’s window front. The OSA make interventions in the city landscape reacting to a theme, query, or feature using a political and sociological emphasis they bridge the worlds of architecture, installation and intervention to highlight and disrupt our habitual ways of inhabiting the metropolis.

9.12.2008 - Flavia Muller Medeiros
Due to the intimate nature of this work please RSVP to Claire Tibbs at intern@rokebygallery.com if you would like to attend

With kind support of Corona Extra.