Trick or treat. In his performances, installations, photographs, and videos, Moudov deals with social and cultural structures and communicational practices. He achieved recognition through performances that directly integrate the viewer: In conjunction with his Traffic Control performance (since 2001), he directs traffic in various European cities dressed as a Bulgarian policeman and documents the diverse reactions of the motorists and authorities according to the respective cultural context in videos. 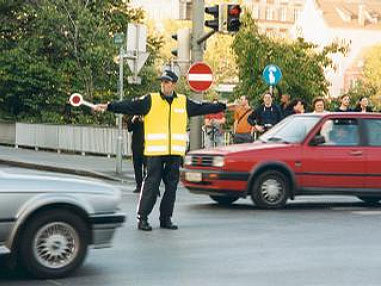 In his performances, installations, photographs, and videos, Ivan Moudov (born 1975 in Sofia, Bulgaria) deals with social and cultural structures and communicational practices. He achieved recognition through performances that directly integrate the viewer: In conjunction with his Traffic Control performance (since 2001), Moudov directs traffic in various European cities dressed as a Bulgarian policeman and documents the diverse reactions of the motorists and authorities according to the respective cultural context in videos. Wildly gesticulating, but fitted with doubtful power by means of his uniform with the Cyrillic inscription 'Police'. Moudov undermines our trust in authority with a twinkle in his eye. In 14'13 minutes priority, he blocked roundabout traffic with a circulating motorcade until the performance was stopped by courageous motorists and the police.

Moudov's performances are ultimately aimed at tracing absurd situations in our everyday environment and its organizational structure. But with the provocations that his interventions evoke, Ivan Moudov also questions the mechanisms of the art scene and his own identity as an artist. In his processual Fragments project (since 2002), he operates a contemporary form of archeology: In the museums of the world, he deliberately stole small elements from the installations of famous colleagues, such as a slide by Douglas Gordon or an eggshell by Marcel Broodthaers. The stolen goods were cataloged and presented in a suitcase on pedestals, similar to Duchamp's 'Boíte en valise.' The space of art itself became a crime scene; the stolen fragments became relics and evidence at the same time. A different type of appropriation to be sure, but, aside from the subtle institutional and representational criticism, this 'pirate collection simultaneously points to Moudov's role as an artist in Bulgaria, a country that still does not have a museum of contemporary art.

One of his long-term projects is therefore the fictitious 'Bulgarian Museum for Contemporary Art' (abbreviated 'MUSIZ'), the opening of which Moudov announced in 2005 by means of a PR campaign: Hundreds of journalists, diplomats, and art enthusiasts followed the invitation and flocked to the supposed opening at a train station in Sofia. Moudov also works on his own real collection that he–deliberately making use of clichés–finances by means of a sleight of hand (Romanian Trick) and displays on an equal level alongside his own works in exhibitions. Moudov, who was trained as a painter, also undermines the classical subject of portraiture in a clever as well as humorous manner: Instead of inviting the sitter to a portrait session, he invites him to go out for coffee.

But he has a fortuneteller analyze the photographed coffee grounds, presents them as an abstract as well as fictitious and intimate portrait in the manner of Kosuth's concept art as a juxtaposition of photograph and text. IVAN MOUDOV. TRICK OR TREAT is Moudov's first institutional solo exhibition in Germany. In recent years, Moudov an participated in international group and solo exhibitions at the Moderna Museet, Stockholm (2008), the 52nd Venice Biennale (2007), the 1st Moscow Biennial of Contemporary Art (2005), In den Schluchten des Balkans, Fridericianum, Kassel (2003) and Manifesta 4, Frankfurt am Main (2002). The exhibition is accompanied by a catalog that is the first monographic publication (German/English) with texts by Iara Boubnova, Mats Stjernstedt, and Hilke Wagner.