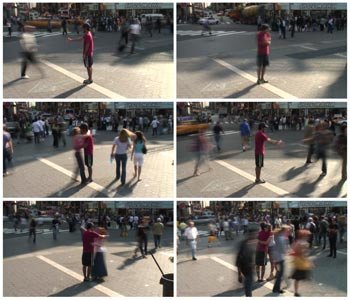 Proyecto cívico / Civic Project is one of two exhibitions that accompany the inauguration of El Cubo at the end of September 2008.The show investigates the concepts of civic responsibility and citizenship as they have been shaped by current political and social conditions; conditions that overtime have been marked by erasures, vacuums, evasions, and exceptions to the legal and cultural codes that have historically defined the basic rights of the individual.

The selection of work includes video, video installation, sculpture, painting, drawing and textile works by eighteen international and regional contemporary artists from Tijuana, Mexico City, Israel, Belgium, and the United States, among other cities. Using parody, simulation, appropriation and performance the works establish a point of departure to explore the complex relationship that exists between citizens and the diverse social and cultural systems that delimitate us.

The Proyecto Cívico: Diálogos e Interrogantes (PCDI) shares the interests of the exhibition after which it is named Proyecto cívico/ Civic Project. The PCDI organizer Bill Kelley, Jr. has put together a working format in two phases where local groups, in and around Tijuana have considered the exhibition's core themes and situated them in relation to their own cultural work. During phase one, seven distinct groups along with their collaborators and interlocutors, spent three months collectively researching their shared interests, using the exhibition's curatorial framework as a starting point, and preparing the project for publication.

Insights were continually published online through group blog sites that became the basis for discussion, negotiation, and publication with seven online journals situated in different cities throughout the United States and Latin America during phase two.

Public programming events and publications will be presented during the exhibition's stay at El Cubo.

Image: Gabriel Acevedo Velarde, For all the people I won't meet, 2006. Video transferred to DVD; 1 min. Courtesy of the artist and Galería OMR, Mexico