For this exhibition Balka presents two large-scale sculptural works and two video works that deal with recent Polish history, and in particular, with notions of displacement, journeys and memory. The title for the exhibition, "Nothere", is purposefully enigmatic and can offer up several possible readings - both "no there" or, equally, "not here" - suggesting a sense of emptiness and isolation. 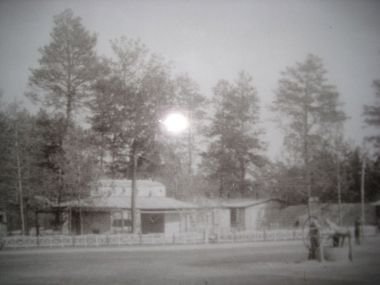 White Cube Mason's Yard is pleased to present a new exhibition of works by Polish artist Miroslaw Balka. For this exhibition Balka will present two large-scale sculptural works and two video works that deal with recent Polish history, and in particular, with notions of displacement, journeys and memory. The title for the exhibition, 'Nothere', is purposefully enigmatic and can offer up several possible readings - both 'no there' or, equally, 'not here' - suggesting a sense of emptiness and isolation.

In the ground floor gallery, Balka is presenting '50 x 700 x 455, Ø 41 x 41/Zoo/T' (2007), a sculpture that delineates the bare structure of an octagonal building. Inside this steel framework, which is rusted and weatherworn, there is a bucket full of some sort of red liquid and a light bulb that gives out a faint glow from its apex. At first glance, it seems as if the structure is leaking and the bucket has collected the drops, but on closer inspection, it is apparent that a pump inside the bucket is simply agitating the fluid and it is not just any liquid but red wine. Circulation of fluid and notions of cleanliness are common themes in Balka's work, which often employ the excrescent and residue materials of human existence such as hair and salt or soap and ash to hint at notions of religion, ritual and the daily ablutions of the body. The title of this work relates to its source: a small menagerie or zoo that existed at Treblinka, a death camp built by the Nazis in 1942 which although active for only one year, claimed the lives of approximately 800,000 - 920,000 Jews. The zoo was built by the controller of the camp to entertain the staff of German and Ukrainian guards who lived on site and was principally a cage for foxes, which were housed at ground level, and for doves that were housed in its roof. The original design, which Balka discovered when looking at photographs from the camp, was clad with thatch and the branches of silver birch trees, which gave it the appearance of something strangely tropical in feel. In this sculpture, Balka has shrunk the height of the zoo to 250cm and proportionally rescaled the building to relate to his own body; 250cm being the height of the artist with his arms outstretched above his head - the maximum volume that the artist could protect.

In the basement gallery, Balka has created a major new installation specifically for White Cube. A wooden walkway with walls measuring 190cm high (the artist's height) without any ceiling and built from the simplest of common building materials - plywood and scaffolding - creates a claustrophobic tunnel. The tunnel begins at the entrance of the gallery allowing the viewer no other option than to walk through it although there is no visible destination. In actual fact, the structure simply leads the viewers around the edge of the gallery space, in so doing tracing its length and breadth and making tangible a journey that hints at some kind of deliberate purification, as if part of a religious ritual. The work, however, has a more precise reference as well: to the 'Schlauch' at Treblinka, a narrow path that connected the area where the inmates were forced to undress with the area housing the gas chambers, where they were then exterminated. The path was lined with barbed wire and disguised with pine tree branches so no one could see its function from within the camp. The plywood in Balka's walkway, related to the wood used in the path, is simple building material but one that carries with it what Balka has described as the 'shadow of the Birnam Wood'. The installation makes the viewer feel the presence of an altogether more powerful force that seems to organise our physical movement against our own freewill, and is an emphatic negation of the gallery space.

In the smaller basement gallery, Balka will present '170 x 126 x 10/T. Turn' (2004) a video projected onto a bed of salt. The film describes a 360º turn that the artist made with his camera at Treblinka while lying on his back and creates a destabilizing and vertiginous landscape. Upstairs, in the entrance foyer, Balka is including another film piece: the shortest film work he has made comprising of a 3 second loop taken from 'Shoah' a now well-known documentary made in 1985 about the Holocaust by Claude Lanzmann. In 'Primitive' (2008) Balka has extracted two words from an interview between Lanzmann and Suchomel, a guard who worked at Treblinka, which refers to the nature of the death camp and which are endlessly repeated like a strange mantra. The monitor is placed on its side, making the film a hieratic and ghastly portrait of an engineer of death.

A fully illustrated catalogue, with essays by art historian Michael Archer and philosopher Zygmunt Bauman will be published to coincide with this exhibition.