Up Against the Wall 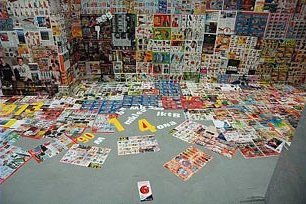 The starting point for the project are murals which, associated above all with wall painting, on this occasion are to be a pretext for a variety of different interventions in/on the architectural interior of the Zacheta gallery. In addition to classical painted murals, the exhibition will also witness the realisation of non-murals: that is to say non-painted installations created from big format prints or other unconventional materials, which somehow reproduce or imitate painted effects.

An essential element in the project is the inscribing of artistic actions in the context of the Zacheta's classical exhibition space. These actions are to take over the existing architecture: the walls, floor, skylights, and staircase whose history reaches back to the beginnings of the 20th century, and which in the beginning of the 50s started to function in the context of the specific aesthetic of the white cube. The monolithic and objective context of the white cube passes in contemporary exhibition-making as a universal space. It is a convention of a space outside of reality, in which the attention of the spectator is to focus on the work of art, while peripheral significations emerging from the realia or context of the exhibition space are neutralized. Prior to entering into relation with the work, however, the spectator often casts an eye over the space of the gallery; and it is this reflex that provides the overarching context for the objects shown within . The sacralised, conventionalised nature of the white cube is sustained as a system of values, through which objects always attain the status of art.

The wall - the symbol of the white cube - does not in itself contain any essential aesthetic features; it is simply a necessity. But from the times of the revolution in art at the turn of the 50s and 60s, and as a consequence in strategies for the making of exhibitions, the wall is no longer a passive support or foundation, but rather is often engaged as an active participant, as a field of confrontation, or as a surface on which artists strive to intervene.

In Zacheta, the architecture of the interior creates an unusual space that does not undergo transformation easily. The artists participating in the project have been asked to engage with the space of several of Zacheta's rooms and create installations - murals/non-murals - which annex the architecture in a total way by taking over its monumental surfaces. These actions aim to create a new quality of space, in which the spectator feels the force of illusion, colour and apparently limitless forms stretching out to the scale of the existing architecture: more extended than a painting in a closed frame, but linked to the proportions of the size of the building. The spectator, who in general quickly identifies with pictures hung on the wall indicating a specified direction of perception, in the case of murals/non-murals receives non-defined vectors of perception - and can take up any possible point of view. The activisation of the wall and interventions in the gallery's interior, the total annexing of space through the extension of painting and non-painting on the surfaces, thus aims to lead spectators into a transformed space of Zacheta. The wall as a tabula rasa available for the making of a record, for inscribing a tattoo.

Such interventions of a temporary nature in an institutionalised exhibition space are also, and perhaps first and foremost, actions in opposition to art as manifested through objects exhibited in the white cube, circulating in the realm of art, filling museum and private collections. They touch the sphere of the social functioning of art as an art-product and luxury object. In the artistic and institutional field, they are therefore a confrontation with the sorts of exhibition strategies in which art appears in a way that is "typically imperial". The space taken over by an intervention becomes exceptionally politicised - it removes objects from the circuits typical of capitalism: the growing circulation of goods and their exchange for money. It can be asserted that such a space becomes an anti-capitalist space, an "anti-market": one which it must be admitted maintains authoritarianism, but tries to undermine it from within.

The exhibition supported by the Ministry of Culture and National Heritage.