Figurative Works from the Hirshhorn Collection 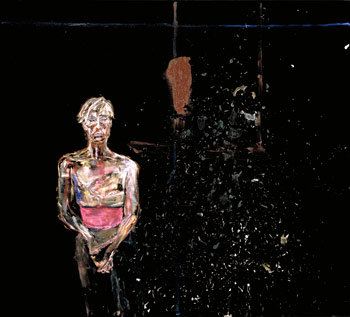 Figurative art plays an important role in the Hirshhorn's collection. "Strange Bodies," on view from Dec. 11 to early 2010, brings together some of the most celebrated examples of figuration from the museum's holdings to examine how and why artists depict and distort the body. Organized by associate curator Kristen Hileman and located in the lower-level galleries, the installation comprises more than 40 works, with a rotation of works occurring midway through the show. The exhibition also includes a gallery devoted to a survey of the museum's unique, in-depth holdings of works on paper and paintings by George Grosz, which demonstrate a socially charged use of the human form.

"Strange Bodies" provides an opportunity to examine the ways in which artists have exaggerated or altered the figure in order to explore cultural and individual conflicts and psychology, as well as formal qualities such as color, shape and texture. The exhibition also traces the evolution of the museum's particular focus on collecting figuration. On view are early to mid-20th century works from the core collection Joseph H. Hirshhorn donated to the museum, including pieces by Francis Bacon, Jean Dubuffet, Alberto Giacometti, Willem de Kooning and others, which reveal the various ways in which these artists dissolved or warped the human figure to heighten its expressive and emotional impact. Hirshhorn also acquired paintings by Balthus and René Magritte, which represent the human subject in a surreal way, locating the body (or its parts) in contexts that are outside of mundane occurrences, and, in part, reflect the traumatic war-torn world in which their art developed.

Building on Hirshhorn's legacy, former director James T. Demetrion brought important examples of figuration from more recent decades into the collection, including sculptures and paintings by Georg Baselitz, Sue Coe, Tony Cragg, Robert Gober, Philip Guston, Edward and Nancy Reddin Kienholz, Julian Schnabel, Paul Thek and Franz West. These works, such as Thek's bloody, sandal-clad "Warrior's Leg" (1966–67) made during the Vietnam War era and Coe's "Malcolm X and the Slaughter House" (1985), often combine expressionistic and/or surrealistic impulses with social critique. The use of unorthodox materials also characterizes several of these works, as with Schnabel's "Portrait of Andy Warhol" (1982) painted on velvet and the Kienholzs' "In the Infield Was Patty Peccavi" (1981), an assemblage of found objects including furniture, a stuffed bird, photographs and electric lights.

The museum has continued to collect figurative works by artists who both participate in and challenge the tradition of figuration, such as Matthew Barney, John Currin, Ron Mueck, Dario Robleto and Yinka Shonibare. Diverse contemporary approaches to representing the human form suggest that individual identity, as well as attributes like beauty, heroism and power, is multifaceted. In Currin's painting and Mueck's sculpture, fleshy nudes challenge ideals of beauty, while Barney creates photographs of part-human and part-otherworldy avatars that meld the biological with the mythological. As if to collapse many moments in the evolution of the human race and culture into a single object, Robleto created the piece "She Can't Dream for Us All" (2005-06). He used bone dust, pulped letters written to soldiers during various wars and melted audio recordings of Sylvia Plath reading her poetry to construct a sculpturally encased cast of the archeological specimen known as "Lucy," a distan t ancestor to "Homo sapiens."

Related Programs
The Hirshhorn offers a range of interactive educational experiences designed to engage people of all interest levels in contemporary art. Friday Gallery Talks are weekly, informal chats with artists and scholars that focus on one work in depth during a lunchtime tour. The museum's ever-expanding library of podcasts (featured on iTunes in the top 100 Arts and Entertainment podcasts) make walk-throughs of galleries and interviews with artists accessible internationally.

Image: Julian Schnabel's "Portrait of Andy Warhol," 1982 From the Hirshhorn'scollection

The Hirshhorn Museum and Sculpture Garden, located at Independence Avenue and Seventh Street S.W. is open daily from 10 a.m. to 5:30 p.m. (closed Dec. 25), and admission is free. Visit the website for more information or to download Hirshhorn podcasts on the collection and exhibitions, as well as talks with artists and curators.