Dreams about Marcel Duchamp. 14 large-scale paintings and 5 works on paper dealing with the artist's fascination with Duchamp. Barrios is known for his heterogeneous compositions, influenced by Surrealism, Pop art and Conceptual art. 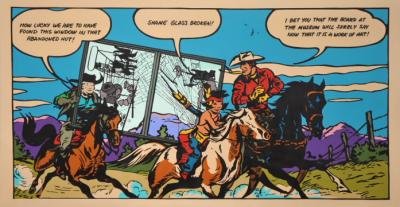 “What we call “pictorial style” is something belonging to the past, it is that antiquity that we refer to as “Modern Art” and whose death certificate was issued by Minimalism and
Conceptual Art.” Alvaro Barrios

“My relationship with Duchamp’s work is not intended as a homage but as a pretext to
emphasize my distance from what is conventional, the conservative positions regarding
art and life itself that are what finally defines the Duchamp myth. I’m not obsessed by
Duchamp or any other icon. What I am trying to do is to tell a history of art not the way
it happened but the way I would have liked it to happen. The comics iconography –
seemingly taken from the Pop - is just a pair of gloves to grab a hot pot, much closer to
the conceptual and its derivatives.” Alvaro Barrios

The exhibition DREAMS ABOUT MARCEL DUCHAMP, comprises fourteen large-scale paintings and five works on paper dealing with Barrios’ fascination with Duchamp. Alvaro Barrios is known for his heterogeneous compositions, much influenced by Surrealism, Pop art and Conceptual art. In assimilating and adapting the lessons of these Twentieth Century
art movements in his own personal and innovative manner, the artist creates a unique aesthetic style, which manifests in the realm of fantasy. Barrios draws upon the comic book popular culture theme by outlining his cartoon-like figures with bold black outlines, including text in his compositions and employing flat vivid colors.

Appropriating imagery that illustrates the influence of Marcel Duchamp, Barrios creates an ambitious mélange that results in playful and original art. In the painting This Work is Already a Part of My Life, 2008 (59 × 59 in), the artist presents a scene in a movie theater, where the comic strip character Clark Kent watches a motion picture next to his love interest Lois Lane. “Clark, don’t you think your passion for Marcel Duchamp is going too far?” asks Lane. Kent, who preciously holds in his lap a replica of Duchamp’s famous porcelain readymade urinal titled Fountain (1917), responds, “this work is already a part of my life, Lois! I’ll always be with it!” Constant references to the French artist in Barrios’s work are used as “a pretext to talk about my distance from the conventional, and everything that signifies conservative positions in art and life, which ultimately, is what Duchamp’s myth represents,” explains the artist. Thus, in employing fiction characters and distinctive pieces and personalities of modern art in an unconventional context, Barrios challenges the imagination and the conscience of the spectator. It is the paradoxical subject matter and creative adaptation of his compositions that gives his work a humorous, yet clever and mysterious quality.

Born in Cartagena, Colombia in 1945, Barrios attended the School of Fine Arts of the Universidad del Atlantico in Barranquilla, Colombia. He later studied in Italy at the Università di Perugia and in la Fondazione Giorgio Cini di Venezia, f. Since the 1970s, Barrios has been representing his country at the Sao Paulo Biennials as well as The Tokyo Print Biennial, The Paris Young Artists Biennial, The Havana Biennial, The Cracovia Print Biennial, The Buenos Aires Triennial and The Poligraphic Triennial of San Juan, among others. In 2001 he received a prize as the best Latin American Artist at the Buenos Aires Triennial. His work is represented in major international collections like The Museum of Modern Art in New York, the Brooklyn Museum, The Art Gallery of Western Australia in Perth and The Museum of Latin American Art in Washington. He has been included in numerous exhibitions such as “MOMA at El Museo: Latin American & Caribbean Art from the collection of The Museum of Modern Art” at Museo del Barrio in 2004 and in 2007, he was part of “New Perspectives in Latin American Art, 1930-2006: Selections from a Decade of Acquisitions” at the MOMA. In February 2008, he was invited to give a lecture on his texts “Dreams About Marcel Duchamp” at The Museum of Modern Art’s Celeste Barthos Theater, in New York.

To accompany the exhibition, a Popular Print by Barrios will appear in the November 19th Edition of the Village Voice, as well as in its website. The artist will sign and number the prints on Saturday November 22nd from 10 a.m. to 12 p.m. They can also be sent to the gallery until December 30th for signing.

Image: Alvaro Barrios, Untitled (How Lucky We eAre To Have Found This Window_ UNTITLED, 2008, acrylic on canvas, 52 × 98 1/2 inches. Courtesy of Nohra Haime Gallery.