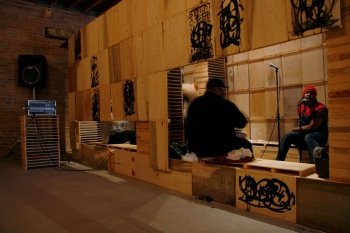 Exploring the relationships among art, politics, and race, Theaster Gates constructs a temple-like structure that merges aspects of African American and Japanese traditions.

Gates's construction also serves as a contemplative space meant to inspire dialogue across philosophical and cultural boundaries on topics ranging from politics and religion to culture, food, and art as well as a performative space for the Black Monks, a group of Baptist-Buddhist musicians who mix slave spirituals, monastic chants, and jazz to create a singular sonorous experience.

Project Funding
Generous support for this exhibition is provided by the Lois and Steve Eisen Family Foundation.

How are cities and neighborhoods reconstituted, and how do the poetics of art and ritual both propel and complicate urban rebirth? In a conversation moderated by artist Theaster Gates, experimental architect and activist Kyong Park and artist and community organizer Rick Lowe engage in dialogue about urban transformation, contemporary art and the global ramifications of highly localized and conflicted processes of change.

In 1993, artist Rick Lowe founded Project Row Houses in Houston's Third Ward on the principle that art and the community that creates it can revitalize even the most depressed of inner-city neighborhoods. Lowe has received the American Institute of Architecture Keystone Award (2000), the Heinz Award (2002), and the Brandywine Lifetime Achievement Award (2006). Lowe was a Loeb Fellow at Harvard University from 2001-2002. As an artist, Lowe has participated in exhibitions and programs internationally, and has worked as a guest artist on a number of community projects across the United States.

Kyong Park founded the Storefront for Art and Architecture in New York 1982 and directed it until 1998. Over the last ten years, he has embarked on a series of nomadic investigations that have taken him from Detroit to the Balkans to Asia's cities. He was the founding director of Centrala Foundation for Future Cities in Rotterdam (2005), a co-curator of "Europe Lost and Found," the editor of Urban Ecology: Detroit and Beyond (2005), a co-curator of the project "Shrinking Cities" in Berlin (2002-2004), founding director of the International Center for Urban Ecology in Detroit (1999-2001), a curator of the Kwangju Biennale in South Korea (1997) and a Loeb Fellow at Harvard University (1996). His current project is titled "The New Silk Roads."

Theaster Gates is a Chicago-based artist and community organizer whose project Temple Exercises is on view at the MCA through January 31.

On the occasion of Theaster Gate's extended project Temple Exercises, the MCA and Little Black Pearl present an afternoon of art, performance, and conversation. Experience one of Gates's "Temple" installations, learn about his working process, and see the ways in which the project developed. As part of the event, the Black Monks of Mississippi perform, and members of the Temple Exercises fabrication team share their perspectives