Six scenarios on tactics of marking 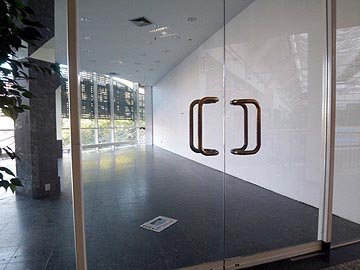 [A fake or a feint is moving your body when dribbling the soccer ball
in such a way that you deceive the defender into thinking you are going
to dribble one way but in actuality you dribble the other. In other words,
you are attempting to unbalance the defender so that they cannot recover
fast enough to catch you as you are dribbling by them.] 1

fake or feint is the title of a seven-month exhibition project of contemporary art dealing with the topic of marking. The project takes place at two salesrooms in the shopping mall 'Berlin Carré' at Berlin’s Alexanderplatz. These will host five consecutive exhibition scenarios that feature contributions by internationally renowned artists. An additional scenario is conceived as a film program, taking place at Kino Arsenal at Potsdamer Platz. The exhibitions are accompanied by a series of seminars, lectures, performances and artist talks. fake or feint is realised in co-operation with Kulturforum Berlin Alexanderplatz e.V. (KFBA) and is funded by Hauptstadtkulturfonds. The project is completed by a publication released in Summer 2009.

Marking is a physical act of altering a surface, as for example to spray or write a graffiti onto a wall. Thereby differences can be created or made visible. fake or feint takes the concept of marking as a starting point to pose the question of the politics of the surface and the operational modes of aesthetic tactics. Beyond the notion of a mere indication of locations and identities, the aim is to consider marking as an act embedded in a setting of flexible and interwoven elements.

Public spaces, body surfaces and media images are not only areas where social norms and boundaries become manifest. They also provide opportunities for action by marginalised groups. As for example in his essay 'Kool Killer or The Insurrection of Signs' Jean Baudrillard interprets the sudden emergence of graffiti in 70s New York as a perpetuation of the street riots on the level of signs. For debates on body and gender, practices like drag and cross-dressing have become of significant interest. As a play with gender categories they are credited with a potential for subversion. The mask of the Mexican Zapatistas and their spokesman Subcommandante Marcos again is a prominent example how medial regimes of identification can be strategically used and at the same time be undermined. Their camouflage has become a political icon as well as the vehicle of a supra-personal identity.

The common feature of these tactics can be found in the way they occupy surfaces. They make use of effects of visibility and the irritation of perceptions to produce scopes of action. Yet they are characterised by an indefiniteness that allows their appropriation by different protagonists. In manifold ways they have drawn the attention of fields like fashion, art, club culture and film. Depending on the context their meaning and impact can radically change. The associated questions and ambivalences are the motive for fake or feint to negotiate them in a variety of forms, to stage and reinterpret them in the mirror of contemporary art production and to pose the question of their conditions, constraints and potentials in the present.
Implementation

fake or feint is composed of six consecutive scenarios. These are designed in a way to engage works of art in an open communication process in terms of formal properties and contents. They comprise works of internationally renowned artists, mostly produced specifically for the project. In most different ways they address forms of marking on fields such as public space, gender politics, fashion, the staging of the body, club culture and entertainment. The artistic means range from installation, video, photography to site-specific intervention.

A second section within the exhibition room includes functions of a process-related archive and of a lecture room. The design is developed by artist Katrin Mayer whose work deals with concepts of display and space. She will design a set of mutable forms that adjusts to the respective exhibition situation. This will contain a reference library of relevant literature, films and illustrative material as well as other media like wall newspapers.

The first scenario of the exhibition series fake or feint, from January 10th to February 7th 2009, shows photographic self-portraits by Claude Cahun and an installation by Eran Schaerf.

Claude Cahun‘s (1894-1954) photographic work was widely overlooked by art history until its rediscovery in the 1980s, when, against the background of feminist debates, it gained unexpected relevance. Influenced by contemporary currents of symbolism and surrealism, her self-portraits display a unique perspective on the body, staged as a projection screen for social norms and personal and external desires. A play with disguise and gender masquerade inquires the relation of gaze and being seen, and the way this becomes effective in the visual setup of the portrait. Her work thereby refers to cultural stereotypes of her time, which are decoded and subverted, confronting them with a subtle and unpredictable expressivity. Shown are three photographic works from the 1920s.
Eran Schaerf sets up a combined re-enactment of prior works.
The installation Voile lances the room with a cloth panel, its course following the basic architectonic structures. In a gesture of reduplication a second, semi-transparent room is created. The attention is directed to the way how architecture opens the room as a stage for views and movements, thus enabling and structuring social interaction. This diaphanous barrier, resembling a curtain or a veil, is a marking that unfolds a play of visibility that crosses the coding of the public and the intimate.
The situation established by Voile is continued by a narration of the Sapeurs, drawing on clothing as a practice with manifold cultural, gender-related and functional codifications. La Sape (short for: La Société des Ambianceurs et des Personnes Élégantes) is a movement originating from Kongo. Its mostly male protagonists use western designer brands for distinctive self-representation. Eran Schaerf frames the intricate trails of global exchange and the contradictions arising from acts of appropriation and translation into a narrative setting: A shirt by Paul Smith becomes a momentum of crisis in the life of a Sapeur. In Paris, the Sapeur comes across a shirt, which has its own history of migration. It is tailored from a Kanga, a rectangular piece of cloth, which in Africa serves in different functions as a garment.

For her five-channel-installation Alma Mater Kaucyila Brooke focuses on the ambulatory of the Vienna University. With its 154 busts of prominent and exclusively male scientists it is a striking example for a male dominated bourgeois representational architecture. The work traces and negotiates the underlying politics of representation, confronting it with alternatives, when a group of students debates feminism in these premises. Textual elements on a wall painted with blackboard paint add a complementary layer of presentation.
Sofie Thorsen’s space installation consists of a wall drawing and two films (in co-operation with Katharina Lampert) that show teenagers in a rural area of the Steiermark (Austria). In a sporadic way subcultural styles make an appearance, such as Graffiti, Skating and Punk hairstyles. Yet these are not specifically made an issue of. Rather they are part of the frame for a typically adolescent behaviour and an everyday leisure time on the country side.

In co-operation with the Kino Arsenal of the Deutsche Kinemathek e.V. Their Potsdamer Platz venue will host a film program curated by Elena Zanichelli and Joerg Franzbecker. The project is extended by a selection of feature films such as Amateur (1994) by Hal Hartley and Private (2004) by Saverio Costanzo as well as art and experimental films e.g. by Chantal Akerman (Saute Ma Ville, 1968), Sadie Benning (Flat is Beautiful, 1998) and Sandra Schäfer (Passing The Rainbow, 2007).

The fourth scenario draws a line from formal and media-specific strategies to the representational practices of entertainment and club culture.
The artist Amy Granat works with film and photo paper which she manually alters by means of acid and scratching. The interference of the transmission process of the medium makes its material substructures instantly visible and allows complex perception experiences. The exhibition shows photographs from her series Stars Way Out.
Annja Krautgasser's video installation VOID.SEQZ5 (sound: Martin Siewert) shows a computer generated surface that is increasingly covered by marks. A script based on an aleatory process generates a unique digital process of image creation.
In her work for fake or feint, the artist Katrin Mayer refers to club culture and entertainment, spheres that are generally considered as exemplary domains of staging, illusiveness and the superficial. Taking this as a starting point, she develops a spatial setting that interweaves material from the history of entertainment in Berlin – from 1920s Friedrichstrasse to present clubbing – into specific spatial and discursive patterns.

Comprising works by Daniela Comani, Keren Cytter and Heiko Karn, the fifth scenario traces questions on body, language and gaze.
In her photo series Eine glückliche Ehe (A Happy Marriage) Daniela Comani broaches the issue of the codification of gender by features of clothing and body language. The images show a couple, apparently man and woman, engaged in familiar situations of everyday life and leisure time. Yet the artist stages herself in a double self-portrait, producing the difference by simple means of clothing, posture and a glued on three-day beard. It is the prosaicness of means and situations that irritates.
Keren Cytter's five-minute film The Mirror stages a female protagonist, interacting with further characters and a camera in a closed room. The theatrically condensed situation focuses on language and immediate bodily interaction, fields on which differences of gender and culture, self- and external perception, nudity and masquerade are negotiated.
In his contribution for fake or feint Heiko Karn focuses on the relation between language and architecture. His starting point is the concept of the lectern, which represents a showcase disciplinary arrangement of sender and receiver. Speaking and hearing, activity and passivity are regulated by the different constellations of seeing and being seen. This is elaborated in an installation setting and confronted with scriptural interventions and tags.

The concluding scenario brings together works by e-Xplo, Daniel Knorr and Eske Schlüters / Axel Gaertner that deal with issues of visibility, media strategies and the public space.
e-Xplo (Erin McGonigle, Heimo Lattner, Rene Gabri) develops maps, tours, routes, sounds and films that document and reflect on locations, social identities and the public space of communication. For fake or feint, in continuation of their bus tour for the 2004 Berlin Transmediale festival, they examine the urban surroundings of the exhibition rooms in Berlin Mitte with their social, narrative and subjective inscriptions.
Daniel Knorr continues a series of works that deal with issues of corporate identity, labels, political symbols and their impact on the public. These works target the effect that is achieved by the unexpected reappearance of such labels in the public sphere, detached from their original context. They trigger a reflection on the public sphere, institutions, and the relation between private and common interests.
In their video installation Limite Meanwhile Eske Schlüters and Axel Gaertner are referring to the pasamontaña, the mask of the Mexican Zapatistas and their spokesman Subcommandante Marcos. This strategic item is at the same time a protection for its bearer, a media icon and expression of an indefinite supra-personal identity: ‘we all are Marcos’.
Series of events

23 April 2009
Jan Kedves, Lecture and video presentation on the History of Vogueing.

23 May 2009
Hanne Loreck, Masquerades, Veils and the Staging of the Subject.

11 June 2009
Elena Esposito on the Paradoxes of Fashion.

Dates will be announced for:

The exhibition series fake or feint is a project of the Kulturforum Berlin Alexanderplatz e. V. (KFBA) and takes place from January until July 2009