The vast array of subject matters, ranging from a critique of commercial culture to distant memories of childhood, address China's politically loaded past and its ever-changing present. 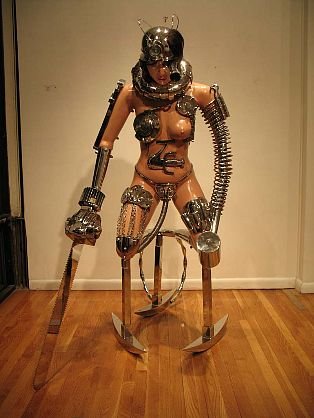 Eli Klein Fine Art is pleased to announce a group show presenting fourteen contemporary Chinese artists in an exhibition opening on January 15 and running through March 2, 2009. This exhibition brings together some of China’s most talented and thought- provoking artists. The vast array of subject matters, ranging from a critique of commercial culture to distant memories of childhood, address China’s politically loaded past and its ever-changing present.

Fan Xiaoyan expresses the sexual empowerment of women with her sculpture, a modern interpretation of today’s Chinese woman. By combining flesh and metal, Xiaoyan comments upon the technological advancement of the human race and the increasing influence of feminism in contemporary Chinese society. Zhang Hui also takes a glimpse into the social, political, and spiritual lives of the women of China while simultaneously allowing the viewers to temporarily take part in their lonely and private worlds she so poignantly depicts.

Liu Bolin reflects on the issue of individuality in a country still striving to recover from the Cultural Revolution by carefully fusing subjects and backgrounds, and therefore challenging the boundaries between the individual and one’s environment. Also contemplating post-Cultural Revolution China are the Luo Brothers, with their bright colors, symbols of western culture, and use of the traditional Chinese medium (lacquer) to display the clashing sensibilities of modern China and the superficiality of replacing spirituality with materialism. Wu Gaozhong and Zeng Jianyong revisit memories from childhood, creating work that represents intense feelings and events that left marked imprints upon their lives. Wang Zhijie and Kong Weimeng display their opinions and thoughts through their use of animated cartoon figures to express a sense of truth whether

it is pertaining to violence, the teenagers of today, or the beliefs and attitudes of the new generation.

Yang Mian chooses to integrate his oil paintings with popular images and social critiques. Through his transformation of iconic scenes, he enables the viewer to engage in a critical dialogue through a biting analysis of commercial culture. Yan Yineng explores the many forms of the element of fire and light to demonstrate the type of radiance which exists at different phases of life.

Luo Qing’s oils on canvas convey a sense of struggle and desperation as he depicts himself and others in seemingly frightening and hopeless situations. By utilizing a dismally colored palate and thick brushstrokes, the feelings of anguish and misery are expressly implicated. He Jian, on the other hand, explores issues of contemporary everyday life while using Chinese pigments and ink on bark paper to combine the tradition of ancient Chinese cave murals with the modernity of China today.

The sculpture of Ma Han illustrates a mixed media technique using rice, fiberglass, and porcelain to explore the rapid expansion of Chinese cities and the chaos that results. The blazing colors and sheer grandeur of Li Tianyuan’s oil painting, Earth, demonstrates a striking contrast with his earlier works.