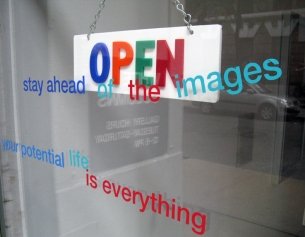 An exhibition celebrating the history of White Columns and 112 Greene Street/112 Workshop.

In 2009 White Columns will celebrate its 40th year of continuous operation. Founded in 1970 and initially known by its original street address - 112 Greene Street / 112 Workshop inc. - White Columns was both a pioneer and a catalyst in the artist-run space movement of the 1970s / 1980s and remains New York’s oldest alternative gallery. Over the past four decades literally thousands of artists have benefitted from early exposure and significant support from the gallery.

To initiate White Columns’ fortieth year we will stage a revelatory – and celebratory - exhibition that will focus on one exhibition, event, or project that took place at the gallery for each of its forty years. Whilst inevitably partial – a complete overview of all the gallery’s activities would be logistically impossible – ‘40 Years, 40 Projects’ hopes to reveal something of the genuine complexity, and eccentricity, of the gallery’s evolving programs over the past four decades.

The exhibition will privilege material drawn from the gallery’s archive, juxtaposed with material from the archives of the original participating artists – augmented by a number of key artworks originally shown at the gallery during this period. ‘40 Years, 40 Projects’ seeks ultimately to underscore the persistent relevance of artist-centered platforms outside of the conventional commercial gallery and institutional structures.