The show consists of 54 works by 48 emerging to established artists. The exhibition represents a cross-section of some of the most exceptional printmaking today, while continuing IPCNY's commitment to provide an ongoing venue for contemporary prints and a major source of information about artists working in the medium. It is the thirtieth presentation of a series of juried exhibitions, and will be traveling to Columbia College Chicago during the 2009 Southern Graphics Council Conference. 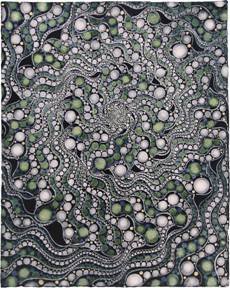 International Print Center New York presents New Prints 2009/Winter in its gallery at 526 West 26th Street, Room 824, between 10th and 11th Avenues in Chelsea. On view from January 14 until February 21, 2008, the show consists of fifty-four works by forty-eight emerging to established artists. An Opening Reception will be held at IPCNY on January 14, from 6-8 pm.

New Prints 2009/Winter is the thirtieth presentation of IPCNY’s New Prints Program, a series of juried exhibitions organized by IPCNY four times each year, featuring prints made within the past twelve months by artists at all stages of their careers. The exhibition represents a cross-section of some of the most exceptional printmaking today, while continuing IPCNY’s commitment to provide an ongoing exhibition venue for contemporary prints and a major source of information about artists working in the medium.

Highlights of the exhibition include: Richard Dupont’s Core, a monolithic etching with aquatint of a human profile; Michele Oka Doner’s untitled relief on handmade paper depicting a network of dark branches loosely rendering a single figure’s circulatory system; Lothar Osterburg’s Congested Planet, a four-plate color photogravure of a model of the earth encircled with highways and bright hot-wheels; and Barbara Takenaga’s Wheel (Zozma), a highly stylized vortex of pearl-like forms crafted on cotton and abaca base sheet with stenciled pulp and acrylic paint. Three artists’ books are included in the exhibition, along with a portfolio of lithographs by Anders Bergstrom, a suite of etchings by William H. Skerritt that read as a treatise on pavement friction, and a three-dimensional, text-based piece fabricated with thread by Buzz Spector.

A curatorial essay by Matthew Day Jackson will accompany the exhibition.

With rare exceptions, prints included in IPCNY's New Prints shows are for sale. IPCNY refers potential purchasers directly to the artist, publisher, or gallery supplying the print. IPCNY requires no commission on sales.

New Prints 2009/Winter will be traveling to Columbia College Chicago during the 2009 Southern Graphics Council Conference. It will be exhibited in a gallery space at 1006 South Michigan Avenue, from March 6 – 30, 2008. An Opening Reception will be held from 6-8 pm on March 27, 2009.

The New Prints Program is the core of IPCNY’s exhibition programming. New Prints 2000 launched the program in September 2000. To date, these thirty exhibitions have included work from over 900 artists and 200 presses across the country and abroad.

International Print Center New York is a non-profit institution founded to promote the greater appreciation and understanding of the fine art print worldwide. Through innovative programming, it fosters a climate for the enjoyment, examination and serious study of artists' prints – from the old master to the contemporary. IPCNY offers its members a program of workshop and gallery visits, and has established an informational website and Information Desk available to the public at the gallery. IPCNY depends upon public and private donations to support its programs.

The New Prints Program is funded in part with public funds from the New York State Council on the Arts, the New York City Department of Cultural Affairs and the National Endowment for the Arts. Generous funding is provided by The Greenwall Foundation. A grant from the Robert Lehman Foundation supports IPCNY’s exhibitions programs.

For further information regarding this exhibition, please contact Kendra Sullivan at kendra@ipcny.org.