The World Stage: Africa, Lagos - Dakar. Featuring monumental new paintings, the exhibition builds upon Wiley's signature examination of figurative painting, drawing global inspiration from contemporary and postcolonial African art and culture. In each painting, contemporary Nigerian and Senegalese men are depicted in poses based on public sculptures that celebrate the nations' independence from colonial rule. Organized by The Studio Museum in Harlem. 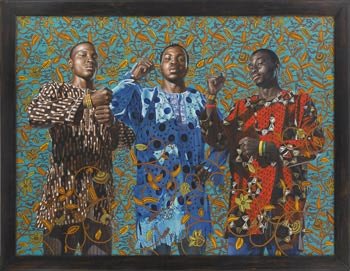 This exhibition is organized by The Studio Museum in Harlem, New York

The second exhibition in Wiley's ongoing "The World Stage" series, the portraits included in The World Stage: Africa, Lagos ~ Dakar were created from the artist's 2007 travels in Nigeria and Senegal. After establishing a satellite studio in the locations, Wiley steeped himself in local culture, history and art, living in the areas for several months at a time. In each painting, contemporary Nigerian and Senegalese men are depicted in poses based on public sculptures that celebrate the nations' independence from colonial rule. Bold backgrounds patterned on the kaftan—traditional attire worn by West African women—envelop the stately male figures in a forest of colorful, complex designs, fusing the imagery of present-day popular culture with historical public art and indigenous patterns.

Artpace's Hudson (Show)Room, the site of this presentation of The World Stage, features exhibitions organized by Artpace's curatorial staff, as well as select traveling exhibitions that reflect the organization's international scope and mission. In keeping with Artpace's International Artist-in-Residence program, these exhibitions encourage the development of new bodies of work and bring exposure to living artists.

ABOUT THE WORLD STAGE SERIES AND KEHINDE WILEY
The first exhibition in Wiley's "The World Stage" series, The World Stage: China, was on view last year at the John Michael Kohler Arts Center in Sheboygan, Wisconsin, with paintings based on poses from propaganda art from the Cultural Revolution. The paintings from Wiley's next stop in the series, Brazil, will be on view in both Brazil and Los Angeles this year.

Wiley received a BFA from the San Francisco Art Institute in 1999 and an MFA from the Yale School of Art in 2001. His work is represented in the collections of several museums, including the Walker Art Center in Minneapolis, Brooklyn Museum, Denver Art Museum and Virginia Museum of Fine Art.

This exhibition is made possible in part by the Linda Pace Foundation.

Artpace San Antonio serves as a laboratory for the creation and advancement of international contemporary art. Artpace believes that art is a dynamic social force that inspires individuals and defines cultures. Our residencies, exhibitions, and education programs nurture the creative expression of emerging and established artists, while actively engaging youth and adult audiences.

Artpace is located downtown at 445 North Main Avenue, between Savings and Martin streets, San Antonio, Texas. Free parking is available at 513 North Flores Street. Artpace is open to the public Wednesday through Sunday, 12-5 PM, and by appointment. Admission is free.