A dialogue between two strong and independent artistic personalities 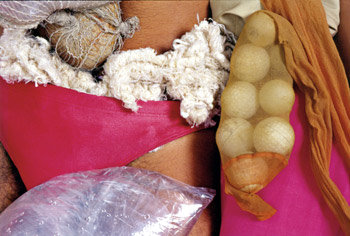 The exhibition Katarzyna Kobro/Lygia Clark is a project comparing and contrasting artistic output of two great figures of the 20th century culture – artists whose achievements have constituted the canon of world art. Katarzyna Kobro (1898 – 1951), a sculptor, painter and art theoretician is considered as one of the most outstanding representatives of Polish and international constructivist avant-garde. Lygia Clark (1920 – 1988) is, perhaps, the most world-famous South American artist connected with the international neo-avant-garde movement. The exhibition in Muzeum Sztuki in Lodz initiates a kind of a dialogue between two strong and independent artistic personalities, a virtual conversation held by their works despite thousands of kilometres and decades apart.

Both Kobro and Clark's artistic activities meet on several planes. The most obvious one is constructivism, which Kobro co-created, and which was basically a starting point for Clark. What both artists have in common is also the fact that their outputs crossed the boundaries set by rationalism and mechanicism of constructivist thought. Their attention was drawn by the relation between body and space, and the way in which they define each other. These interests led the Polish artist to Spatial compositions created in relation to the body movement in space. The artist from Brazil, in turn, was brought to the activities involving a spectator's body in the process of artistic creation, and eventually to therapeutic practices targeted exclusively at corporality, or, strictly speaking, a psychosomatic phenomenon a human constitutes.

Juxtaposing artists' works provokes reflections upon the hidden potential of constructivism. That is why the exhibition puts together Compositions, Spatial sculptures, and Abstract sculptures – which were the core of Kobro's output – on the one hand; while on the other hand – works representing almost whole Clark's output from 1954 including public actions and therapeutic sessions.

The starting point for this confrontation is an intriguing interaction between artists' visions of the world and human relations with it. On theoretical grounds the dialogue is complemented with parallels at the level of a constructivist visual language. This is what the first part of the exhibition is dedicated to. The next one, dedicated exclusively to Lygia Clark's achievements, draws our attention to the less obvious options of developing constructivism than the ones that are usually credited to post-constructivism of the '60s and '70s. Photographs and film recordings presented in the second part of the exhibition show a shift of focus in Clark's art from object-creation to action. Interactive replicas of her works (e.g. from the Bichos series) let us realize what role the Brazilian artist attributed to the objects in terms of shaping a special sensual, corporeal experience.

The exhibition in ms² is an attempt at re-interpreting the relationships between avant-garde and neo-avant-garde ideas. It's also a pretext to ask about the direction in which Kobro could have gone if she had not passed away so prematurely.

Department of Promotion and Marketing
Head of the Dept. Joanna Studzińska
phone: 42 6399878 promocja@msl.org.pl