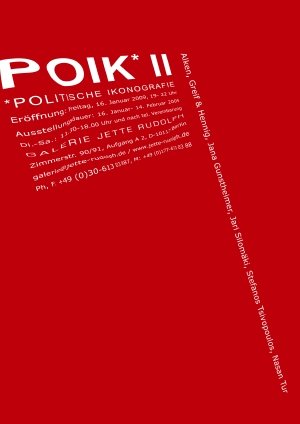 „I am thinking there is a longing by most of us not to start; a similar desire to be on the other side of the discourse (...).”
(M. Foucault, The order of Discourse, inaugural lecture of the College de France, 1970)

“POIK II”, is a follow-up in terms of content of the group show “Political Iconography I” presented at the gallery Jette Rudolph at the turn of the year 2007/ 08. It is primarily concerned with the current relevance of iconographic and heraldic symbols in contemporary art. On the other hand Chapter II is seeking a more marked approximation to the question of political act/ political declaration: not the seeking of artistic truth by the language of old 20´ies socialists (cf. “ASSO”), rather by subversive approaches (in sense of J. Rancieres) like inter-institutional criticism of the state of art, artists and aesthetics as the medial break of social fabrics respectively formulated in the public. (cf. Jutta Held in: introduction of “Political Art Today”, in: Art and Politics, vol. 9, Osnabrück 2008)

Within the exhibition project “POIK II” five artists of diverse cultural backgrounds picture their reflection of historical retrospect and political current events using film, photography, image, objects and installations with a fictive, poetic, sarcastic or pragmatic connotation. By use of diverse artists statements the partial approaches of the critic to the morality and its shifted demarcation of truth and history will be shown. They counteract with the omnipresent demand of the masses; the speaker has to create transparency, has to act as an enunciator.
The principles of society: hypocrisy, mediocrity and wretchedness are shown, even the absence of the critics to the state morality and violence, political and economic mind and their manipulation mechanisms. Across the media their all-over-truths are suggested by mass of information and image surplus, interventions by grass-roots movements become the linchpin of the single works.

The artist duo Greif & Hennig (often in project with some other artists, here: Franz Alken) are working in diverse media: industrial materials, multimedia enactments as well as installed combinations of word and image. Their works are provided with a satiric- ironic undertone, with the shifted paradoxes of iterations and repeatabilities into a play ensemble, though with a revolutionary character. Alken, Greif & Hennig

The work “F.´s Karriere” (“F.´s career”) by Jana Gunstheimer is a part of the same-named multipiece installation, within which the fictive life and functioning of so-called “POA´s” (“persons without functions”) are simulated. By means of combinations of logo- image- text she radicalizes suggested contents and possibilities of interactions of the media and entertainment industries to capture them simultanously onto the homogeneous level of b/ w asthetics, in which the dark- conspirative material is evoked and compared with the blunt social reality of unemployment and identity crises.

The photoinstallation entitled “Personal War Stories of an Outsider” (2007) by Jari Silomäki deals with two different levels of reality: contemporary war witnesses by “second-hand experiences” are captioned by autobiographical notes likewise diaries. The romanticised retrospective of war is confronted with the trauma, the fears and losses of directly concerned persons. Like a foil the association of a nightly heaven is placed on the bullet-holes on walls of war areas. The mass of such images and the growing lack of emotions towards destruction and confusion at the sight of actual news are brought to the plan again and again.

The recently awarded artist Stefanos Tsivopoulos (Golden Cube- 2008) will present his latest movie “in Plato´s cave”. By two simultaneous scenarios the process of inspection of archive material, the cutting and even the finished war report is purposed minutely; one is set in the 30´ies by costumes and setting, the other is set in the present. Using calm image sequences a meditative atmosphere is created to evoke moments of fragility even through the minimal shifting of time and space. Tsivopoulos`s interest is not the analysis of collective memories in sight of the moral conclusion, rather the prospect of an autonomic poetic, narrative potential of the images and their hidden truths.

Nasan Tur combines social, cultural and political contents with his affections for actions and products; respectively he acts in the public space to leave agitative or symbolically over-loaded objects. His strategies are often set out of institutional stereotypes, to provoke processes of appreciation and decision by the recipient. Tur produces manifold graffiti-quotes, captured onto a wall cell a gestic expression of emotions and aggressions will congeal into mysterious illegibility, on the other side the action will be legible in the form of a recorded memory via video documentation; the representation of the material vehicle: wall/ spray colour and the inner motive force.