A research project by Elaine W. Ho - Fotini Lazaridou-Hatzigoga. Organized as a daily series of experiments, interventions and discourses, the initiative aims to examine the potentiality of latency and open spaces made possible in the relations between individuals and publics. Individuals in good health between the ages of 15 and 80 are invited to take part. 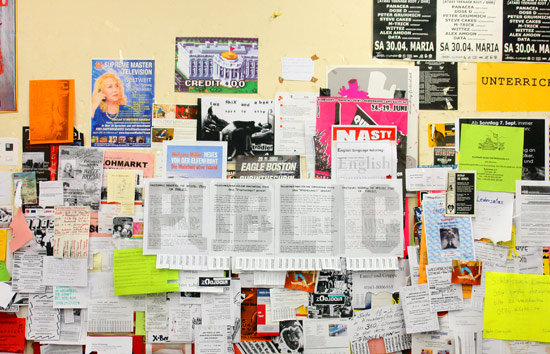 PUBLIC is the first in a series of research projects to be hosted by PROGRAM. Organized as a daily series of experiments, interventions and discourses, PUBLIC aims to examine the potentiality of latency and open spaces made possible in the relations between individuals and publics.

Your participation is requested. Individuals in good health between the ages of 15 and 80 are invited to take part. Activities will be updated here daily; please see the schedule above to find which suit(s) you best.

The PUBLIC project comprises a number of experimental investigations taking part in multiple phases, the first of which began in the Autumn of 2008 in the city of Beijing. There, video documentation of a series of gatherings in public spaces were examined both in context and as an abstraction, and the gestures, passing shapes and micro-scale narratives thus recorded became the first research material of the project (presented as a work-in-progress at the Beijing Independent Film Festival in November 2008).

Now in this second phase, we come to a Berlin without the density of the multitudinous masses dotted all over Beijing, and the more abstract sense of Berlin’s “scenes” begs the question of social gathering in a very different sense. As the word “participation” seems to be the mot du jour in current art and socio-politics here, the question of the individual in relation to any larger organ becomes more and more relevant. What is repeatedly brought to our attention is the transitive space exemplified by the moment of participation, or the liminality in which individuals in space become groups, collectivities or crowds. While a public seems to rest conditionally upon its manifestation of itself, or a certain self-awareness that engenders its own publicity, these Berlin experiments are more involved at the scale of the latent or indirectly communicated. In this sense, a gathering in public space is regarded from a different set of relationships—relationality as another opening of space, whereby a public is created as a multiplicity of encounters and individual relations—a whole that is not merely the sum of its parts.

/// _an "Opening" of Critical Mass
Not much makes it an object of itself, stay just a little bit longer. 527 places

/// _a Warm-Up
A passing-by could be a getting ready, getting to know. Places unlimited, in rotation.

/// _a Video-Making
Six players required for 4 hours of a co-produced non-narrative film shot at various locations throughout Berlin. Scenes are gestural or performative, sculptural or atmospheric, depending upon the group and the weather. 6 places, interested players please RSVP.

/// _a Reading Group
Chosen text to be announced here shortly. Interested parties should e-mail reserve a place for the meeting, and a PDF version of the text will be sent upon confirmation. 15 places

/// _a Spring Festival
Class I only, the Year of the Bull, slow and steady. Taking care of business, not letting things slide. ~6,000 places

/// _a Public Dinner
Look who's coming over for dinner, waiting until everyone arrives before we begin. 10 places

/// _a Neighborhood Coffee Break
Neighbors and relations to the community are redrawn in the real space of PROGRAM based upon a neighbourhood (a)socius; coffee, tea and biscuits served. 20 places, by invitation only.

/// _an Analysis & Data Processing
Working all day, drop by any time. 2+ places.


Elaine Wing-Ah Ho is an artist and designer whose work uses the premises and vocabulary of design in order to ask questions about how functionality and objecthood intertwine with social relationships and everyday life. She works slowly (MA Communications, European Graduate School 2009, BA Art & Art History, Rice University 1999) and quickly (left Academy of the Arts in Arnhem, 2005 and Parsons School of Design, 2001) and is now based in Beijing. Selected exhibitions include: Sense of Smell (Shangshang Art Museum, Beijing 2008); Wherever we go, we walk in circles everyday (Galerie Aube, Kyoto 2006); Border Conditions (66 East Centre for Urban Culture, Amsterdam 2004). Most recently she has started HomeShop, a storefront turned sleeping-working-living space that has in December 2008 produced the first edition of its new journal series wear. Elaine likes drinking coffee and tea mixed together and is a frequent collaborator at: www.iwishicouldescribeittoyoubetter.org

Fotini Lazaridou-Hatzigoga graduated from the Architecture Department of the Aristotle University of Thessaloniki, Greece in 2003, and thereafter traveled to the United States as a Fulbright Scholar at the Harvard Graduate School of Design. In 2005 she received her Masters in Design Studies in the History and Theory of Architecture and began working as an architect and researcher both in Boston and Thessaloniki.
Alongside PROGRAM, Fotini is also working in documentary film (The foreigners (2009) and Royal, Nebraska (2007) both filmed and edited with Toby Lee) and actively collaborates with iwishicoulddescribeittoyoubetter on projects that explore the ways we relate to eachother and our surroundings.