Four exhibitions and one event

Peter Fitzpatrick produced the series "Je toto lokalni, nebo narodni zvyk?" during a 5 month artist-in-residence program at the Meet Factory in Prague. Cub separated from spooked polar bear is Sanja Pahoki's latest investigation into mother-child relationships, mental illness and language. "On the line brings" together national and international artists whose process involves risk or who use their immediate environment to explore universal themes. For Night Projection Window, The Promise, by Boris Eldagsen, questions what we think we know about expectation and salvation. Finbally, at CCP Shop Space: Alan Constable. 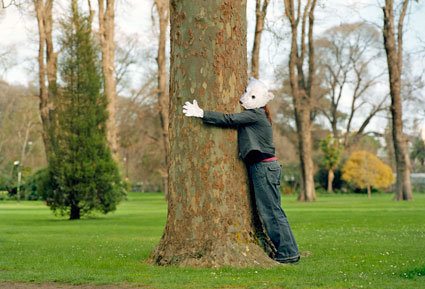 This series Je toto lokální, nebo národní zvyk? was produced during a five month artist-in-residence program at the Meet Factory in Prague, Czech Republic from November 2007 to April 2008. I was living in the outer suburb of Prague known as Smíchov, a once thriving industrial area that now consists of abandoned factory buildings, crumbling flats and a major transport hub. The transitory people that inhabit this part of Prague are the protagonists in this body of work.

Due to the language barrier that exists outside the tourist area of central Prague, I was relegated to a muted observer wading through the streets of Smíchov. Instead of using a camera to document what I observed, I packed a trusty Tesco A6 Note Book and a pencil. On my return to the studio, in the early hours of the morning, my memory and basic lead scratchings came together to reconstruct a faithful depiction of my subject. As with the nature of photography there are some glitches rendered in the final images. Like double exposures my memory and the characters’ concerns overlap, diffuse and merge—a photographic truth built on a misinterpretation.

Cub separated from spooked polar bear is Sanja Pahoki’s latest investigation into mother-child relationships, mental illness and language. The exhibition is based on media reportage of two polar bear cubs that were hand-reared by German zookeepers after being rejected by their mothers. One of the mothers became disturbed when a photographer entered her enclosure. The zoo feared that the fate of the polar bear cub, named Flocke would follow that of two other cubs that had been eaten by their mother, Vilma. Flocke has been compared to Berlin Zoo’s celebrity polar bear, Knut, who was also rejected by his mother Tosca, an ex-East European circus performer. Like Elvis Presley, Knut had a twin brother that died shortly after birth. At the height of Knut’s fame he was photographed by Annie Leibovitz and featured on the cover of Vanity Fair magazine with Leonardo DiCaprio. The decision to hand-rear polar bears has been controversial with some animal activists claiming that the zoos should have let ‘nature take its course’ by leaving the cubs to die. As vindication of this belief there has been speculation about Knut’s mental health. Zookeepers have claimed that Knut is a ‘psychopath’ who is addicted to human adulation.

Curated by Anne Wilson On the line brings together national and international artists whose process involves risk or who use their immediate environment to explore universal themes. Initially these environments are seen relative to the artists’ methodology, yet over time a shift occurs in the viewing experience transporting viewers into a poetically inscribed reflection on the human condition. Produced through a variety of mediums, these works are heartfelt, and the underlying curatorial cohesion comes out of a resonance that continues long after first viewing.

Films by Russian-artist Olga Chernysheva, American-artist Miranda July (early short films) and Australian-filmmaker Sarah Lewis are screening in Gallery Four. Chernysheva’s films are derived from guerrilla-style filmmaking narrating an ardent response to social and political conditions in the streets and parks of contemporary Moscow. Her videos highlight the political through to the personal, by way of carefully selected and edited scenes. July’s early films straddle the boundary between naivety and knowledge; control and loss of innocence. Nest of Tens (2000) presents ‘four alternating stories about mundane, personal methods of control. Children and a developmentally disabled adult operate control panels made out of paper, lists, monsters and their own bodies.’1 Lewis’ film The Staring Girl (2006) explores themes of female sexuality at the coming of age—a young girl tries to express herself sexually albeit inappropriately amidst dysfunctional family dynamics.

Gallery Three contains works of a performative nature—Domenico de Clario’s A Tertiary World (2007), Jan Nelson’s Vertical Composition/Vertical Collapse (1998) and Catherine Bell’s Snow Baby (2003). Each of these works have involved documenting, in video and photography, risky acts that are sincere responses to the transitory nature of memory, the notion of failure and transcendence within art making, and loss. Also in Gallery Three, Kate Swinson uses photography and video to construct subjects for her drawings within which hand-made paper masking devices are used to explore the interior/exterior relationships of her family and friends. Dutch-artist Semâ Bekirovic also uses her immediate environment in photography and video setting up relationships between nature and consumerism. Anne Wilson’s work investigates how representation of the body often fails to express an inner life.

The Promise questions what we think we know about expectation and salvation.

A woman is standing, waiting, her right hand held up, expecting something to come from above. She shows signs of exhaustion, her eyes water and her hand slightly shakes. On her left shoulder sits a mysterious bird. When her hand reaches towards the bird, it flies away. She goes back into her waiting position, hoping for something to arrive. Nothing happens. Her hand reaches back a second time, touching her empty shoulder. When she returns to wait, the bird appears out of the blue, sitting on her left shoulder as if it had never disappeared.

This silent video work is a one-woman-show for renowned German actress Sandra Hüller who won numerous awards at international film festivals for her role as a possessed girl in the movie Requiem.

“The door to happiness opens inwards. Anyone who tries to push this door open thereby causes it to close still more.” Sören Kierkegaard

As a child, Alan Constable constructed intricate models of cameras from scraps of cardboard and glue. In his recent work he re-visits and re-invents the camera using images from 1960s and more recent National Geographic magazines.

These internally structured cameras are made from glazed ceramic. This suggests a sense of weight and tactility which is consistent with Constable’s working methods, which primarily involve touch. “Alan’s imagination allows him to explore what he knows exists but cannot see, often re-inventing where necessary various hidden chambers for film and spools.”1

Constable’s finger marks clearly remain within the work as traces of humanity, enabling them to be seen as lyrical interpretations of what are very technical instruments. In this way, an Alan Constable camera can be viewed as an extension of the human body, rather than a direct replica.