Elias Sime' - Eye of the Needle, Eye of the Heart. A highlight of the exhibition is a series of striking thrones made of leather, wood, mud and straw, which will be integrated into conductor Esa-Pekka Salonen's final Los Angeles Philharmonic concerts staged by Sellars in mid-April. Arnold Mesches - Coming Attractions. His work combines an interest in twentieth century political and social conflicts with a surrealist approach to painting-offsetting frank, historical moments with rich, melodramatic dreamscapes. 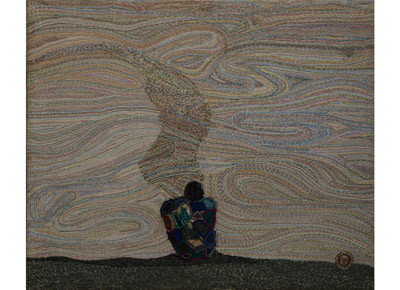 Arnold Mesches has created unabashedly figurative work for more than six decades and has emerged as a seminal figure in American painting and a remarkably fresh voice in contemporary art. In the West Coast debut of new paintings that explore the American condition, Arnold Mesches: Coming Attractions opens at the Santa Monica Museum of Art on January 24 and will be on view through April 18, 2009.
Mesches’ most recent work delves into dark periods of American history and situates them in a hauntingly contemporary landscape. His work combines an interest in twentieth century political and social conflicts with a surrealist approach to painting­—offsetting frank, historical moments with rich, melodramatic dreamscapes.

This new exhibition of Mesches’ work, curated by Lisa Melandri, SMMoA’s Deputy Director for Exhibitions and Programs, and uniquely installed in two Project Rooms, will feature selections from his most recent series, including landscapes and interiors. Aptly titled, Coming Attractions alludes to the works’ theatrical elements, as well as to a portent of what might be to come.
Mesches’ large-scale interiors and landscape canvases, are laden with acerbic colors and vigorous brushwork. In his interiors, Mesches fills opulent concert halls and antique salons with stark reminders of social and political realities, rendered in deep blacks, austere whites, and sickly greens against the blazing colors of their surroundings. Mesches’ landscapes are similarly harrowing, depicting glimpses of human existence between the trunks of decaying trees. These canvases are portraits of a disturbing, looming future, both absurd and poignant, as well as emotionally authentic.

The theatricality and grandeur of the paintings evoke Mesches’ own history working in the movie industry during the 1940s and 50s in Los Angeles, and their skepticism and ominous sensibility harkens back to the 27 years he was subject to heavy scrutiny by the FBI for his participation in peace marches and demonstrations against McCarthyism and the House Un-American Activities Committee. Mesches eventually obtained his 760-page FBI file through a Freedom of Information Act (FOIA) request and turned dozens of the documents—crisply typed white pages thick with black bars, dating from 1945 to 1972—into a popular and critically acclaimed art exhibition, The FBI Files.

Throughout his 60-plus-year career as an artist, Mesches has woven many narratives into lush and virtuosic paintings, and in Coming Attractions Mesches affirms that he is as potent as a painter and storyteller as ever. His life’s work serves as a remarkable record of one artist’s struggle to come to terms with the turmoil of the twentieth century. He has stood staunchly for using contemporary art as a vehicle for protest, a visual amplifier of societal good and evil.

Coming Attractions also marks a homecoming for Mesches, who was born in the Bronx, grew up in Buffalo, New York, and moved to Los Angeles in 1943 to accept a scholarship at the Art Center School (now Art Center College of Design). Mesches spent nearly half his life in L.A., and came into his own here in the mid 1940s and into the 50s, becoming known and revered for his socially critical paintings and his portraits. He now resides in Gainesville, Florida. He is the recipient of many awards, including the Pollock-Krasner Foundation Grant (2002).

Mesches has exhibited extensively throughout the United States and abroad in 125 solo exhibitions and countless group shows, and his works are included in many prestigious public and private collections, including the Metropolitan Museum of Art, the National Gallery of Art, the Los Angeles County Museum of Art, the Hirschhorn Museum and Sculpture Garden, the Albright-Knox Museum, and the High Museum of Art. However, Mesches has still not received the global recognition or broad appreciation he so deserves for his influence and importance to the canon of contemporary art. As an antidote to this oversight, SMMoA will install Mesches’ work in two Project Rooms, doubling the museum space normally allotted to such exhibitions.


From January 24 to April 18, 2009, the Santa Monica Museum of Art presents Elias Simé: Eye of the Needle, Eye of the Heart, the first survey exhibition in the United States of one of Ethiopia’s most original and prolific contemporary artists. The exhibition, co-curated by Meskerem Assegued, a revered Ethiopian curator and anthropologist, and visionary theater, opera, and multi-disciplinary arts impresario, Peter Sellars, is comprised of more than 100 works in a variety of mediums, scale, and forms. A highlight of the exhibition is a series of striking thrones made of leather, wood, mud and straw, which will be integrated into conductor Esa-Pekka Salonen’s final Los Angeles Philharmonic concerts staged by Sellars in mid-April.

Elias Simé: Eye of the Needle, Eye of the Heart will be accompanied by a film by award-winning filmmakers Jonathan Dayton and Valerie Faris (Little Miss Sunshine) that will uniquely document the exhibition.

Using yarn, plastics, tattered fabric, buttons, used plastic, and bottle tops, each of the collages and stitched canvases Simé creates for Elias Simé: Eye of the Needle, Eye of the Heart represent a complete essay about the current state of his surroundings. Simé’s three-dimensional sculptures are made with traditional organic Ethiopian building materials such as mud and straw, as well as wood, metal, and other found objects, gathered in part by neighborhood children.

It was Sellars passion for Simé’s work that initially inspired SMMoA’s executive director Elsa Longhauser to consider the idea of an exhibition of Simé’s work. During their conversations, Sellars explained that Simé’s thrones, designed to elevate and celebrate Ethiopia’s street culture, so moved him that he was determined to feature the thrones in his production of Stravinsky’s Oedipus Rex and Symphony of Psalms, Salonen’s final concerts on April 16, 17, 18 and 19. Simé originally designed the thrones for Sellars’ 2006 New Crowned Hope Festival, a celebration of Mozart’s 250th anniversary in Vienna, Austria.

In Elias Simé: Eye of the Needle, Eye of the Heart, the thrones make up part of the installation piece Min Neber, a new iteration of a series of works in which Simé addresses the dignity, wisdom and depth of the ancient indigenous cultures that are rapidly disappearing from Ethiopia. Also, displayed in a semicircle around a small ceremonial table, the installation will include five wall sculptures, made from wood, cans, leather, and stitches, as well as a short, silent video installation documenting indigenous religious practices of small villages in Ethiopia. In Mud and Straw, small mud and straw creatures take over the gallery space. A video installation documents Simé’s construction of a Gota, the traditional grain storage container found in northern Ethiopia.

As a child, Elias Simé taught himself to sew, embroider, and repair furniture. He collected cast-off objects and materials, such as flattened tin cans, and fashioned them into his own creations. Today Simé still collects energetically—plastic shopping bags in different colors, plastic shoes, horns from slaughtered cattle—and buys some of the raw material for his work, such as buttons, at the Mercato, Addis Ababa's sprawling central market. Just as he gathers materials for making art from the markets and streets, Simé finds the themes for his works in the streets of Addis. He documents the lives and portraits of Ethiopians living in the Cherkos Gebeya, Legaehar and Chide Terra areas surrounding Addis Ababa, where he finds most of his working materials. Simé has deep connections with the communities he documents, in particular with the neighborhood children who bring him objects they collect from the street.

Born in Cherkos, outside of Addis Ababa, Ethiopia, Simé graduated from Addis Ababa University’s School of Fine Art and Design with a degree in graphic design. His practice focuses mainly on collages, stitches, and three-dimensional sculpture. Simé has had numerous solo shows, and has participated in many group exhibitions including the Studio Museum in Harlem, New York; Peter Sellars’s New Crowned Hope in Vienna, Austria; the Dak’Art Biennale 2004, in Dakar, Senegal; and the Zoma Contemporary Art Center and the National Museum in Addis Ababa. Simé lives and works in Addis Ababa.

Peter Sellars, a director of opera, theatre and film, is renowned worldwide for his innovative treatments of classical material from western and non-western traditions, and for exploring the role of the performing arts in contemporary society and his commitment to spreading artistic vision to enact change. He has served as artistic director of the Los Angeles Festival, the American National Theatre at the Kennedy Center, the Boston Shakespeare Company and the Elitch Theatre for Children in Denver. Sellars is a professor in the department of World Arts and Cultures at UCLA, where he teaches Art as Social Action and Art as Moral Action. His past teaching positions include a visiting professorship at the Center for Theatre Arts at UC Berkeley. He resides in Los Angeles.

Trained as an anthropologist, Meskerem Assegued is the curator and founder of Addis Ababa’s Zoma Contemporary Art Center. In 2006, she curated Green Flame in Vienna, Austria, part of the New Crowned Hope Festival, in which Simé participated. Assegued has served as a selection committee of the 2004 Dak’Art Biennale, one of the largest contemporary art exhibitions in the world. In 2007, Assegued was on the selection committee for the African Pavilion in the 52nd Venice Biennale. She lives in Addis Ababa.