An Aya Iguchi initiated project also featuring Matias Ring & Julia Schnabel. A collaborative exhibition and event project by three artists, which invites the audience to take an active role in the collaboration, in order to remove barriers for conversation and make the space transparent. 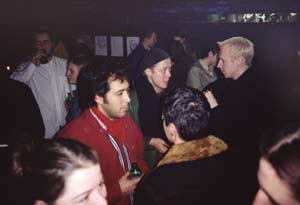 In late 2001, following extensive investment and refurbishment of the exhibition space, an open call for programmers, phrased as "Curator Wanted - No Experience Necessary," was held to find the most provocative programmersfor the new gallery and resulted in this multi locational group.

Aya Iguchi was raised in Japan and educated in Edinburgh and Rotterdam. Aya curated the 2001 touring exhibition "Haiku Installation" (London Guildhall University and Podium Gallery, Glasgow) as part of the Japan 2001 Festival. She recently participated in a 3-person show at Intermedia Gallery in Glasgow (with Scott Sherry and Steff Norwood).

Tara McDowell and Letha Wilson are a collaborative team based in the US whose projects critique contemporary curatorial practice. Their collaboration began as coworkers at Artists Space, a non-profit contemporary arts organization in Manhattan. "Curatorial Proposal," at Artists Space in March 2000, demonstrated their fundamental concern with critiquing the role of the curator as purveyor of taste and trend. More recently "(Your Show Here)" opened in January 2002 at the Massachusetts Museum of Contemporary Art. This project investigates the role of the curator by allowing the museum visitor to curate their own digital exhibition. They consider the physical gap between them and the gallery to be a provocative and stimulating unknown.

Mike Stubbs is senior research resident at Duncan and Jordanstone College of Art (Dundee, Scotland) and is currently showing the DVD installation "Donut" at CCA Glasgow. Stubb's internationally commissioned artwork encompasses film, video, mixed media performance and curation. Other recent productions include a short dance film, "Resistor" (2000, BBC 2/Arts Council); "River," an installation presented at York City Screen; and "Zero" (Arts Catalyst 2001), a film made with Gina Czarnecki using material shot during a parabolic flight at the Yuri Gagarin Training Centre, Moscow. His work at Hull Time Based Arts won him recognition as a primary promoter of new media. During his directorship, he set up Time Base and launched the Root Festival.

Free Gallery is situated in Glasgow' s Merchant City "arts quarter" just yards from hundreds of artists' studio spaces and many other cultural venues such as Transmission Gallery and the Tron Theatre.