Unpredictable Forms of Sound and Motion

With several works making their international premiere, three Untitled Sound Objects by Pe Lang + Zimoun will be part of the exhibit, along with photography, video and sculpture from Tim Knowles' Walk series. The exhibition engages creative contemporary perspectives on automated systems, performance, and sculpture. Curated by Steve Sacks. 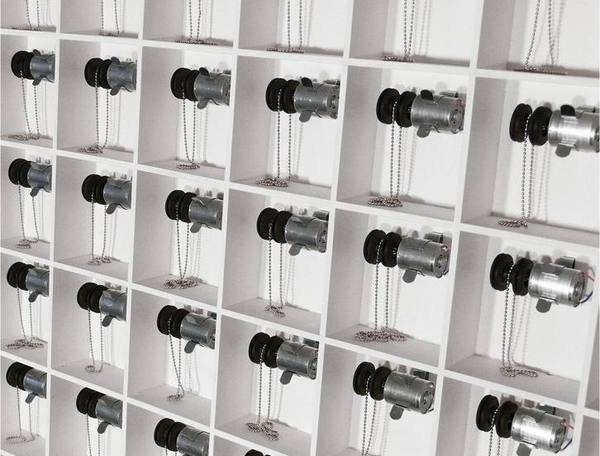 bitforms gallery is pleased to announce its first exhibition with artists Tim Knowles (b. 1969, United Kingdom) and duo Pe Lang (b. 1974, Switzerland) and Zimoun (b. 1977, Switzerland). With several works making their international premiere, three Untitled Sound Objects by Pe Lang + Zimoun will be part of the exhibit, along with photography, video and sculpture from Tim Knowles' Walk series.

Attracted to natural materials such as trees, moonlight, water, and geo-data, artist Tim Knowles uses cameras and drawing to reveal the hidden, or otherwise unnoticed motion of objects. For example, Knowles’ Postal Drawings are created en route from the artist’s studio to its final destination and capture the commonplace movements within a global tide of transfer points. Likewise exploring the interlaced spaces of earthwork, landscape and Fluxus systems, his works from the Windwalks and Nightwalks series engage the artist’s capricious wanderings.

Nightwalk–Valley of Rocks is a series of illuminated walks that Knowles created in Devon during a new moon and captured using an extended exposure photograph. Over a period of about one hour in these pieces, the artist walks away from a tripod-mounted camera while carrying very powerful flashlights illuminating his path along a rocky ridge in the darkness. Invoking Plato’s allegory of the cave, a pathway of ghostly travelers shines inside an electrified landscape.

Knowles’ Windwalk–5 Walks from Charing Cross is a sequence of performances guided solely by the wind. Playfully exploring drawing and narrative, the artist used a helmet-mounted wind vane for direction and traced his steps with a GPS device. Originating from the geographic center of London in this piece, nocturnal city life is revealed through video documentation. Examining the human mark and control of territory, the piece takes a sharp absurdist jab at the effectiveness of modern tools in time of conflict. Executed in the early hours of the morning and guided by a set of self-authored rules, unpredictable events unfold and Knowles’ route becomes increasingly chaotic and indecisive. Whirling currents bouncing off buildings lead the artist into virtual wind cul-de-sacs of littered plastic bags and swirling leaves with no escape until the wind once again changes its direction.

Biography – Tim Knowles
The creative practice of Tim Knowles incorporates chance operations and performance into his mark making. Elements of form are open to mechanisms or phenomena beyond the artist’s control–seeking to reveal the hidden, or otherwise unnoticed motion of objects such as the path drawn by the full moon’s reflection on undulating water or the intricate movement of a parcel traveling through the postal system. Tim Knowles has been featured in numerous solo and group exhibitions throughout Europe including the Generali Foundation, Vienna; Economist Plaza, London; Rokeby Gallery, London; Artissima, Torino; Plymouth Arts Centre, UK; Hayward Gallery, London; Bloomberg Space, London; Hull Time Based Arts, Hull; Gallery Skuc, Ljubljana; Essor Gallery, London; Comune di Codogno, Italy; and Zero, Italy. The second of two unique Royal Mail collaborations with Royal Mail will be completed shortly. His awards include grants from South West Arts, the British Council in Rome and a residency with Makrolab [Artscatalyst] Art and Science Research.