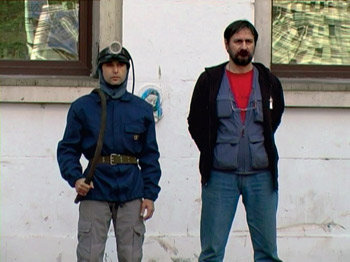 The pilot project Public Art Bucharest | Spatiul Public Bucuresti consisted of a series of artistic interventions, discussions, and actions, and took place in 2007. Bucharest is one of the fastest growing cities in Europe, a place where post-communism and globalization have released great tensions in architecture, city planning, and social policy. The public space of a city is defined above all by the social interactions of the residents and the ways in which these tensions are perceived and reacted to. In this project, the unresolved questions of the recent communist past and current processes of transformation were explored artistically and anchored in a public debate.

The project, continued in 2008, is conceived as a platform for interdisciplinary debates intended to inspire critical engagement with political and social factors that define the notion of democracy and publicity. The exhibition project is accompanied by the book series Colectia Public, published by IDEA Verlag Cluj and Verlag der Buchhandlung Walther König, Cologne.

Sunday, February 1, 6 pm
Trilogy: Videograms of a Revolution (with Harun Farocki, GER 1994), Out of the Present (GER/FR/RU 1995), Autobiography of Nicolae Ceausescu (working title, work in progress)
Presentation with Andrei Ujica (film maker) and Sophie Goltz (Communication n.b.k.) and Screening Out of the Present ( 96 Min)