Cold War Cultures. For East and West Germany during the Cold War, the creation of art and its reception and theorization were closely linked to their respective political systems. Reacting against the legacy of Nazism, both Germanys revived pre-World War II national artistic traditions. Yet they developed distinctive versions of modern and postmodern art. By tracing the political, cultural, and theoretical discourses during the Cold War in the East and West German art worlds, Art of Two Germanys reveals the complex and richly varied roles that conventional art, new media, new art forms, popular culture, and contemporary art exhibitions played in the establishment of their art in the postwar era. 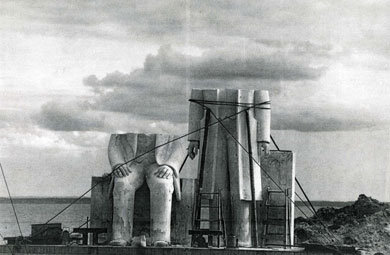 The Los Angeles County Museum of Art (LACMA) presents Art of Two Germanys/Cold War Cultures (on view January 25 to April 19, 2009), the first major exhibition in the United States to examine the range of art created during the Cold War. Art of Two Germanys/Cold War Cultures continues LACMA’s tradition of thematic explorations of twentieth century German art in its political, social, and historical contexts and is cocurated by LACMA’s Stephanie Barron and Eckhart Gillen of Kulturprojekte Berlin GmbH. Barron previously curated two critically acclaimed German exhibitions at LACMA—“Degenerate Art”: The Fate of the Avant-Garde in Nazi Germany (1991) and Exiles and Emigrés: The Flight of European Artists from Hitler (1997).

For East and West Germany during the Cold War, the creation of art and its reception and theorization were closely linked to their respective political systems: the Western liberal democracy of the Federal Republic of Germany (FRG) and the Eastern communist dictatorship of the German Democratic Republic (GDR). Reacting against the legacy of Nazism, both Germanys revived pre-World War II national artistic traditions. Yet each developed their own distinctive versions of modern and postmodern art—at times in accord with their political cultures, at other times in opposition to them. By tracing the political, cultural, and theoretical discourses during the Cold War in the East and West German art worlds, Art of Two Germanys reveals the complex and richly varied roles that conventional art, new media, new art forms, popular culture, and contemporary art exhibitions played in the establishment of their art in the postwar era.

Barron explains, “Modern and postmodern German art has been generally identified with expressionism, which has prevented a more complex reading within an international context. This reception of German art has been inextricably connected to national identity and political context. Art of Two Germanys/Cold War Cultures is the first exhibition since the end of the Cold War to fully examine the intricacies of the art of the two Germanys without reducing the works to familiar binaries of East versus West, national versus international, and traditional and static mediums versus open and experimental art forms. The exhibition mines these complexities, ultimately revealing a more multifaceted perspective on the art of East and West Germany.” Art of Two Germanys is the first special exhibition to go on view in LACMA’s new Renzo Piano designed-building, the Broad Contemporary Art Museum (BCAM). Divided into four chronological sections, the exhibition includes approximately 300 paintings, sculptures, photographs, multiples, videos, installations, and books by 120 artists. The show features large scale installations and recreations of major works by Hans Haacke, Heinz Mack, Sigmar Polke, Raffael Rheinsberg, Gerhard Richter, and Dieter Roth, as well number of videos and performance-based works.

Section I: 1945–1949 Artists: Willi Baumeister, Carlfriedrich Claus, Hans Grundig, Werner Heldt, Hannah Höch, Ernst Wilhelm Nay, Wilhelm Rudolph, Richard Peter Sr., Fritz Winter, and others Art of Two Germanys/Cold War Cultures begins with the defeat of Germany at the end of World War II. The work generated during this period illustrates artistic ruptures and continuities in relation to the surrealist and expressionist traditions before 1933. The depiction of war, ruins, and mourning represented in works by Hans Grundig, Werner Heldt, Hannah Höch, and Richard Peter Sr. reveals artists dealing with the devastated landscape and exploring the mindsets of the German people following the war. The so-called formalism debate of 1948 in the West defined realism as the appropriate form of representation for a new socialist society, and the pluralism of stylistic expression in East Germany consequently narrowed. Abstract and semi-abstract work by Willi Baumeister, Ernst Wilhelm Nay, Fritz Winter, and others in the West was associated with freedom and democracy, thus possessing its own definite political stance as well.

Section II: The 1950s Artists: Ursula Arnold, Rudolf Bergander, Chargesheimer, Arno Fischer, Hermann Glöckner, Konrad Klapheck, Willi Sitte, ZERO group, and others The contradiction of West Germany’s reliance upon now-flourishing modernist abstraction and East Germany’s connection to Soviet-style socialist realism is explored in the second section of the exhibition, which encompasses the 1950s. During that economically robust period in the West, abstraction and the dependence on new materials was evidenced by the ZERO group (Heinz Mack, Otto Piene, and Günther Uecker), which, in works like Mack’s elaborate installation Relief Wall from the Diogenes Gallery (1960), examined relationships among science, technology, and art as well as questions of perception. Simultaneously, a realistic pictorial language emerged in the East in the works of painters such as Rudolf Bergander and Heinrich Witz. Hermann Glöckner, whose previously unseen work is a feature of the exhibition, was one of the few artists working privately in the East. He created a group of constructivist objects from found materials and challenged the image of art produced in the GDR, since the aim was neither to champion socialist principles nor to critique them. The optimism of the so-called economic miracle in the West was questioned by critically focused photographs by Chargesheimer working in the Rhineland; in the East Ursula Arnold and Arno Fischer captured images of contemporary society that were critical of official views.

Section III: The 1960s and 70s Artists: Georg Baselitz, Joseph Beuys, Hartwig Ebersbach, Bernhard Heisig, Eva Hesse, Jörg Immendorff, Anselm Kiefer, Konrad Lueg, Markus Lüpertz, Wolfgang Mattheuer, Blinky Palermo, Sigmar Polke, A. R. Penck, Gerhard Richter, Dieter Roth, Thomas Schütte, Werner Tübke, and others Testing and expanding conventional art terms, experimenting with new forms, materials, and technology, and the changing status of art and the artist all played a key role during the 1960s and 70s, the period encompassed in the third and most complex section of the exhibition. Revelations about the Nazi era, widely disseminated for the first time, coincided with the burgeoning student movement as artists began to address the trauma of the German past, break the taboo of guilt, and question German national heroes and symbols. This was framed by an increasingly divided Germany with the erection of the Berlin Wall in 1961. Wolf Vostell and Joseph Beuys figured prominently, as do many of Beuys’ students, several of whom had left East Germany for West Germany shortly after the Berlin Wall went up. Many artists were engaged with performance activities of the international Fluxus movement during the mid-1960s that centered in West Germany (Nam June Paik, Beuys, and Vostell). Artists such as Georg Baselitz, Anselm Kiefer, Markus Lüpertz, Gerhard Richter, and Wolf Vostell in the West engaged Germany’s recent revelations from the Auschwitz Trials in Frankfurt, while the coded critiques of Cold War politics and responses to Germany’s recent past can be found in the work of Bernhard Heisig, Werner Tübke, Wolfgang Mattheuer, and Hartwig Ebersbach in the East. This section also features The Wall (1977), a large installation of over 1,000 paintings by Thomas Schütte, the recreation of Gerhard Richter’s 1966 Volker Bradke exhibition, Sigmar Polke’s Potato House (1967), as well as his multipart work, The Fifties (1963–69), and Dieter Roth’s Chocolate Lion Tower (1968–69).

Section IV: The 1980s Artists: Autoperforationists, Klaus vom Bruch, Lutz Dammbeck, Tödliche Doris, Harun Farocki, Isa Genzken, Hans Haacke, Georg Herold, Martin Kippenberger, Via Lewandowsky, Marcel Odenbach, Albert Oehlen, Helga Paris, Thomas Ruff, Katharina Sieverding, Thomas Struth, Rosemarie Trockel, and others The fourth section of the exhibition begins with the politicization of the visual arts as a result of growing unrest, the student movement, and the terrorist underground during the late 1970s and 1980s. Widespread violence, fueled in part by assassinations, kidnappings, and hijackings by members of the Red Army Faction (RAF) in West Germany, are reflected in photography, video, installations, and paintings of a number of artists, including Katharina Sieverding, Lutz Dammbeck, and Klaus vom Bruch. In the 1980s, postmodern concerns of gender and sexuality, class, and race took on particular German characteristics and are reflected in the work of Martin Kippenberger, Isa Genzken, and Rosemarie Trockel. Changing political conditions in the East allowed the emergence of loose networks of artists working independent of official state sanctions. The exhibition introduces rarely seen photos, videos, and relics from the Autoperforationists’ performances in Dresden in the 1980s, works by the Clara Mosch Group in Karl Marx Stadt, and examples of unique artists’ books, all of which epitomize the increasing production of unofficial art. Unofficial East German photography in the 1970s challenged state mandated imagery; the photos of cities and ordinary citizens by Ulrich Wüst and Helga Paris, filled with symbols, layers, and pastiche, are among the most interesting and challenging work to emerge. This final section also examines the synthesis of private and political spheres in art, which undermine the Eastern state’s cultural doctrines. At the same time, topics such as abandoned landscape and architecture offer the neutrality of evoking the past without any direct references to politics or gender. The exhibition closes nearly five decades after its starting point, with the demise of the Soviet Union and the collapse of the GDR in the late 1980s. Richter’s November and Marcel Odenbach’s video No One is Where They Intended to Go, which includes footage of the tearing down of the Berlin Wall on November 9, 1989, finally and fittingly frame Art of Two Germanys/Cold War Cultures.

Upon closing at LACMA, the exhibition will travel to Germanisches Nationalmuseum, Nürnberg (May 27–September 6, 2009), and Deutsches Historisches Museum, Berlin (October 3, 2009–January 10, 2010).

Los Angeles County Museum of Art - LACMA
5905 Wilshire Boulevard - Los Angeles
Museum Hours and Admission: Monday, Tuesday, and Thursday, noon–8 pm; Friday, noon–9 pm; Saturday and Sunday, 11 am–8 pm; closed Wednesday. Adults $12; students 18+ with ID and senior citizens 62+ $8; children 17 and under are admitted free. Admission (except to specially ticketed exhibitions) is free the second Tuesday of every month and on Target Free Holiday Mondays. After 5 pm, every day the museum is open, LACMA’s “Pay What You Wish” program encourages visitors to support the museum with an admission fee of their choosing.