Art in the Name of Security. An interdisciplinary exhibition by the Akademie der Kunste, Berlin, and the Kunstlergruppe BBM focussing on the societal shifts caused by the universal desire for security. The curators Olaf Arndt, Moritz von Rappard, Janneke Schonenbach and Cecilia Wee have commissioned artists to formulate their visions and regard current conditions in a new light, through works produced while being themselves embedded, on location at future security research facilities or at special forces training sessions. 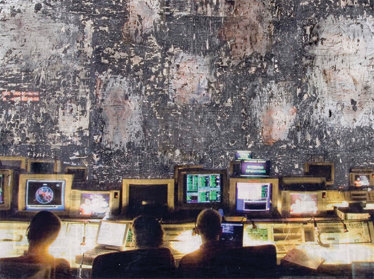 In 2009, the first exhibition of the year at Berlin's Akademie der Künste will be devoted to a topical, highly political theme. EMBEDDED ART looks at the threats to unrestricted public life following the attacks in New York, Madrid, Moscow and London. State and private organisations across the globe are producing new tactics, strategies and technologies to fight the dangers threatening our democracies and jeopardising our understanding of the term ‘civilisation’. Indeed, everything that can be performed “in the name of security” appears desirable: security has now become an ideology.

For EMBEDDED ART, the curators Olaf Arndt, Moritz von Rappard, Janneke Schönenbach and Cecilia Wee have commissioned artists to formulate their visions and regard current conditions in a new light, through works produced while being themselves “embedded”, on location at “future security” research facilities or at special forces training sessions. The term “embedded art” provides a working principle for the more than 30 commissioned works and interventions in public space, while “security” tells of the exhibition’s political core. EMBEDDED ART presents a spectrum of contemporary art from countries including Germany, USA, Japan, South Africa, Spain, Great Britain, Kosovo, Italy, Japan, Greece and Slovenia, attempting to foster with its audience a critical understanding of current global trends and the principles behind free, independent and self-determined life.

As well as using the five historic exhibition halls in the Academy of Art, visitors to EMBEDDED ART will - for the first time - be able to see the four-storey hi-tech underground bunker built to store the Academy’s collection. "For security reasons", original art pieces will be accommodated in this secure part of the building, projections of the originals will be shown in the main exhibition spaces, using state-of-the-art surveillance camera technology. The exhibition will be complemented by an accompanying programme of performances, tours, discussions and films in public space and in the setting of a temporary club space on the top floor of the Academy of Arts, overlooking Pariser Platz and Brandenburg Gate. A catalogue published by argobooks, including specially commissioned essays, will accompany the exhibition.