A Collection. Ted Scapa, the well-known Swiss cartoonist, born in 1931 in the Netherlands, was a contributor to the international press before taking over the reins at Benteli Publishers in Berne for over thirty years. The exhibition documents his relationship to art and introduces the visitor to his collection and its very personalized dialogue between tradition and Modernity. On show Christo and Jeanne-Claude, Frank Stella, Keith Haring, Paul Klee and many others. 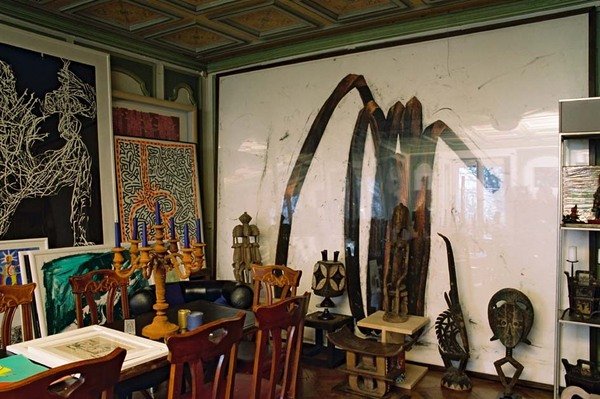 The exhibition at the Museum Tinguely affords an insight in the eccentric collection of Ted Scapa. The well-known Swiss cartoonist, born in 1931 in the Netherlands, was a contributor to the international press before taking over the reins at Benteli Publishers in Berne for over thirty years. With the childrens’ programme Das Spielhaus of the German Swiss television DRS Scapa became a known public figure in the 1960s and ‘70s. Today, he lives and works as a freelance artist and organises Creativity Workshops.

The exhibition SCAPA Memories documents Scapa’s relationship to art and introduces the visitor to his collection and its very personalized dialogue between tradition and Modernity. For Scapa, art is a vital necessity of life. The items that have come together throughout his lifetime do not follow an intentional strategy but rather his intuition. This cultural biotope in which Ted Scapa and his wife Meret have lived and worked for the past fifty years reflects Scapa’s vision and experience of the world and of art.

Scapa’s favourite word, „creativity“, is at the same time his message and the criterion of selection behind the constitution of his collection. A further important impulse of his overflowing passion as a collector are the Memories, his recollections of numerous encounters with artists from all over the world, some of them developing into yearlong friendships, others perchance encounters prompted by the spontaneity of his enthusiasm. With time, this activity produced an inspired medley of artworks and objects that is totally in keeping with Scapa, the man, but also the artist known for his design of lamps and carpets.

His important activity as a publisher (c. 1500 titles) brought him together with a great number of artists, gallery owners, collectors and museum people – a magical mix that always was an inspiration. He was not only close to great names such as Joan Miró or Aimé Maeght, but also entertained close friendly ties with numerous individuals who all partook of his legendary hospitality. The publication of catalogues brought him in contact with the masters of monumental graphic works, to name but a few of Germany’s group of “New Savages” – Georg Baselitz, Markus Lüpertz, A. R. Penck, Jörg Immendorff – and the Swiss artists Martin Disler, Peter Stämpfli or Alfred Hofkunst.
In Scapa’s collection that evokes a “cabinet of curios”, colourful letter-drawings by Jean Tinguely and one of his machine-sculptures neighbour almost naturally ritual items and objects of daily use from the most varied peoples and eras. Monumental graphic works by the hand of renowned artists of the 20th century, amongst them Antoni Tàpies or Frank Stella, are part of the ensemble, sharing the stage with Chinese terracotta figures or wooden sculptures, masks and reliefs from Africa.

In his Eldorado, his manor-house on the Lake of Morat, sculptures, objects and works on paper fill the drawing- and dining-room, the window niches and all the ledges, the tables and cupboards, the lintels and landings, overflowing from the kitchen to the toilets.
In front of the works on paper stacked along the walls, African figures, mostly male and female nudes, some small others overly large, masks and drums are positioned with accuracy, some of them to fit the images in colour and form, others crudely placed, probably for lack of space. New acquisitions are constantly added and the total artwork acquires a new focus, without however a loss to its impact.
This “cabinet of curios“ is a source of inspiration for Ted Scapa and the driving force behind his own artistic output. He is as fascinated by the expressive and often bizarre faces of non-European artworks as he is by the artistic means of expression offered by the technique of reproduction of works on paper by modern artists.

With total insouciance, he cares not whether the African figures are original or copied after old models. The context of their origins does not count, not to speak of any scientifically proven provenance. What does count is the fact that an artisanal artistry has been handed down, a guarantee of survival, without loss to its strength of expression. Thus Ted, the artist, has his very own approach to art, and for Ted, the art communicator, who with his Spielhaus revived the roots of creativity among children of the entire country, a successful reproduction is as valid as its optimum communication. As a publisher, as a man of the written word and an exegete of printing, reproducible art is always closest to him. The exhibition at the Museum Tinguely presents 120 items from Scapa’s collection as well as a film by Roy Oppenheim documenting Scapa’s life and his particular relationship to art.