This exhibition in homage to Albert Hofmann takes visitors on a hallucinatory journey that challenges all the senses. Claiming artistic activity as the supreme "cosa mentale", Briand develops a number of possible parallels between the famous inventor of LSD and artists such as Marcel Duchamp and Leonardo da Vinci. 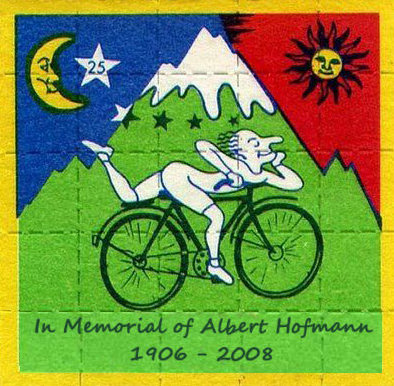 This exhibition in homage to Albert Hofmann, who died earlier in 2008, takes visitors on a hallucinatory journey that challenges all the senses. Claiming artistic activity as the supreme cosa mentale, Mathieu Briand develops a number of possible parallels between the famous inventor of LSD and artists such as Marcel Duchamp and Leonardo da Vinci.

What is the common denominator between the technique of sfumato, Duchamp’s concept of the infra-thin and the physical theory of the super-symmetry that unites matter, energy and space-time? According to Mathieu Briand, all these concepts, in their different ways, presuppose the presence of a force linking the heterogeneous elements. Thus, in this “in-between world” the artist finds a powerful mental space, which is the territory that he explored during his project.

Bearing witness to a state of “altered consciousness,” the works of Mathieu Briand confront us with a reality that is constantly in motion and immerse us in the flux of fading illusions. To experience the full potential of this metamorphosing reality, we need to follow the artist’s advice: “only the door is important, not the two spaces that it separates.”

I am writing now that reality has caught up with you, and you have gone. It did take its time, I must say. But then haven’t you simply passed through one of its many doors?

In fact, perhaps you have met my friend Caroline there? She wanted to fly with Superman, but he let go of her hand. She crashed down onto a car bonnet. No getting away. The incredible thing about Superman is not only that he didn’t make her fly, but that, in real life, he crashed too. A loop was formed between two times and two spaces, transforming these two destinies into an unending story.

What is more beautiful than a kiss of friendship, than a tender embrace by frightened teenagers – for that’s what we were: frightened. You, you jumped; we stayed where we were. And you changed my life forever. That night, my heroes died with you. The infinity of imagination is, potentially, as much a source of real pleasure as of pointless suffering. For me, that is what sums up your invention.

I started a campaign to find out. Fighting and moving ahead with your substance, that is what is so difficult; that is the contradiction. It’s a struggle in which we are our own enemy, in which the solution is found in ourselves, in the bullet wound we inflict on ourselves. I went for it, alone in knowing what was guiding me. I didn’t spare myself or my troops. We all paid, and you know how great the cost was. And, as in any kind of armed struggle worthy of the name, the time came to do some thinking and arms were downed, transformed.

We then decided to spread this subversion through society, not by confrontation but by accompanying, stimulating. We couldn’t make the earth spin backwards, but perhaps we could do that with our perception of the earth. Luckily enough, guides have left a few tracks behind them on the vertiginous wall of consciousness.

Sfumato, the infra-thin, and also super-symmetry, have helped me conceptualise the apparent contradictions of this accident, and to understand that movement and energy hold the whole thing together. What is important is not so much the difference between things as the mental space that opens in this in-between area.

A blurred line is a line that moves.

And then, like them, your substance became detached from its initial function and embodied in a simple power of evocation. Reality was then able to vibrate, deteriorate, and woe to those that weren’t ready.

The door is the only thing that matters, and not the two spaces that it separates, for when one is open, the other is automatically closed. I stay in the door frame. I stop moving, no longer breathe. For me it’s all over. I am there and I’m thinking of you, my dear Caroline, nestling deep in my heart.

Take care of my friend. Goodbye, and thank you.

LSD
LSD25 acts on the connections between neurons (synapses) that regulate information in the nervous system and acts simultaneously on several neuro-transmitters. It fixes on the receivers of serotonin, hence the heightened sensitivity to colours, touch and sound. It disrupts the glutamate by activating it, hence the problems of speed and thought. Finally, it stimulates the circuit of dopamine, hence the feeling of euphoria.

LSD induces an altered state of consciousness. Because it is hallucinogenic, the effects of LSD can vary depending on factors such as past experiences, state of mind, personality, and the environment, when it is taken, and the power of the dose. It can be considered ethneogenic, given the recurring accounts of mystical experiences by those who have used it. LSD is a mind-altering drug in the sense that it disrupts the five senses and does not necessarily engender visual hallucinations, but rather illusions: deformation of moving geometrical motifs, colours that are more luminous, coloured trails behind moving objects, misjudgement of distances, etc. It thus engenders sensorial modifications in general.

Sfumato
Sfumato means “evanescent,” with an idea of being smoked up. It is a technique of painting that is closely associated with Leonardo da Vinci. He described it as “without lines or contours, like smoke, or beyond the focal point.” It is a vaporous effect, obtained by superimposing several extremely delicate layers of paint, which gives the subject imprecise contours. It is used to give an impression of depth in Renaissance paintings. This is also described as “atmospheric perspective.” The effect of depth is due to the fact that details and contrasts become softer at a distance. On one side, the smaller size makes it harder to distinguish the elements (see the article on separation); on the other, the absorption of the light by the atmosphere (dust, fog) attenuates differences.

Rotoreliefs
Paris, 1935.
Duchamp thought of his rotoreliefs as toys. They are 12 highly graphic motifs based on spirals, printed on both sides of six strong paper discs. Placed on a turntable, when spun they created the illusion of 3D forms – balls, cones and helixes.