Half and whole. Movement is the first prerequisite for a story; the second one is the perception of movement. This group exhibition focuses on stories that arise and are enabled as a process of deceleration sets in - in movement itself as well as in its perception. On display are works of art that direct their attention to all that is missed by the quick movement. Thus, they tell completely different stories than a purely functional digitalisation does. Many of the artists are concerned with the manifestations of the coincidental and the ordinary. 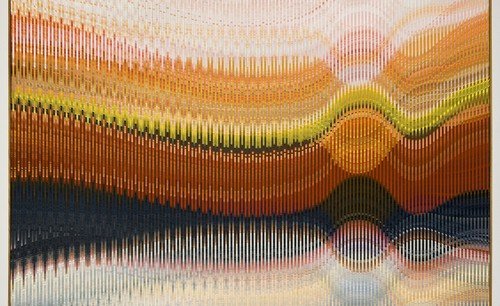 Movement is the first prerequisite for a story; the second one is the perception of movement. The exhibition “Slow Movement or: Half and whole” focuses on stories that arise and are enabled as a process of deceleration sets in – in movement itself as well as in its perception.
The term “deceleration” indicates temporality and might consequently suggest an interpretation such as “the same process unfolds over a longer period of time”. However, as soon as perception is slowed down, other pieces of information are introduced and meanings change; the process cannot be said to remain the same. The decelerated movement opens up a parallel world.
The exhibition “Slow Movement or: Half and whole” is dedicated to works of art that direct their attention to all that is missed by the quick movement. Thus, they tell completely different stories than a purely functional digitalisation does.
Above all, the idea of “Slow Movement” denotes a space. Not the space of the museum or the physical space of the artworks, but rather the space of a movement: decelerated perception grants us the opportunity of entering and exploring places instead of being spoon-fed preconceived information for each second. If the movement is slow, it can encompass many things. In such a movement, we could spend days and think everything.

In this context, “Slow Movement” functions as a strategy that, through the aspect of temporality, always refers to the fragmentary. Beginning and end, the limits and margins, are not clearly delineated – and they do not have to be. Fragments are comprehensible. They can be lived and understood like many “strong” experiences in life that are not strong by virtue of their completeness or perfection, but because of their precision. This precision does not require localization or “definition”, nor does it need to be expanded. It exists where it takes place and it persists, not because it was made to persist, but because, through this sort of sensory perception, it has anchored itself in experience.

Many of the works on exhibition are concerned with the manifestations of the coincidental and the ordinary, not by offering a grand-scale atmospheric portrayal of the latter as a “landscape”, as it were, nor by claiming the ordinary and the coincidental to be universal principles through the way they are executed. Rather, they render the manifestations of the coincidental and the ordinary as occasions for insight, reduced precisely to that point of epiphany. The works of art do not “create” a world; they merely refer to an existing world, showing us the “catch” of a process, the fragment that was harnessed and brought forth by a movement.
We digitalize our perception in order to discern the “whole” and to grasp, as quickly as possible, a universal meaning that serves our orientation and our further actions. The “half”, on the other hand, exhibits the quality of a genuine search for enlightenment, an individual quest for understanding. Invariably, this quest for understanding is accompanied by a process of deceleration; there are no routine practices that could be used to save time.

Therefore, the failed works of art and the amateurish works of art that will never attain “completion” are of interest too, for they were forced to comprehend something. Just like genius intervenes in an artist’s activity, so too can constraints interfere with what he or she is doing. A simple movement on our part would suffice.
We like to think of a work of art as an autonomous entity, similar to a person, with which we should make contact and on which we should reflect in a patient and careful manner. And just like the flaws and the contradictions of a person, the flaws and the contradictions of a work of art can expand our perspective and broaden our horizon. They allow us to actually get involved as viewers, to ask ourselves to understand, combine and synthesize and to transcend the role of the consumer waiting for a spectacle.
“Slow Movement or: Half and whole” also means: life before art and life after art.