An exhibition of work by American artist Philip Guston inaugurates an ongoing series of shows in the Tower Gallery focused on developments in art since 1970. For more than five decades, Guston explored ways to paint, from the mural art of the Depression through mid-century abstract expressionism to a raw new imagery beginning in 1968. Pride of Place: Dutch Cityscapes of the Golden Age presents 48 paintings and 23 maps, atlases, and illustrated books: a survey of the Dutch cityscape, from wide-angle panoramas depicting the urban skyline with its fortifications, windmills, and church steeples, to renderings of daily life along the canals, in city streets, and in town squares. 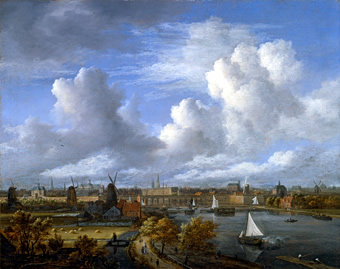 An exhibition of work by American artist Philip Guston (1913–1980) inaugurates an ongoing series of shows in the Tower Gallery focused on developments in art since 1970. For more than five decades, Guston explored ways to paint, from the mural art of the Depression through mid-century abstract expressionism to a raw new imagery beginning in 1968. His shocking return to figuration in that year, influenced by the comics and politics, paved the way for numerous developments in contemporary art. This exhibition of seven major paintings and a selection of prints and drawings, mostly drawn from the Gallery's own collection, charts Guston's career from 1949 to 1980.

Pride of Place: Dutch Cityscapes of the Golden Age
February 1–May 3, 2009

Visitors will travel back in time to Dutch cities of the 17th century during Pride of Place: Dutch Cityscapes of the Golden Age, on view February 1 through May 3, 2009, in the West Building, National Gallery of Art, Washington. The exhibition of 48 paintings and 23 maps, atlases, and illustrated books will offer a breathtaking survey of the Dutch cityscape, from wide-angle panoramas depicting the urban skyline with its fortifications, windmills, and church steeples, to renderings of daily life along the canals, in city streets, and in town squares.

The booming economy of the Dutch Republic fostered a new genre of painting in the 17th century—the cityscape. Images of towns and cities expressed the enormous civic pride of the era. Some 40 Dutch master artists are represented in the exhibition, including Gerrit Berckheyde, Aelbert Cuyp, Carel Fabritius, Jan van Goyen, Jan van der Heyden, Pieter de Hooch, Jacob van Ruisdael, Pieter Saenredam, and Jan Steen. A standout is Van Goyen's 15-foot-long View of The Hague from the Southeast (c. 1650–1651), which he painted for the town hall. Other cities depicted in the exhibition include Amsterdam, Haarlem, Delft, Dordrecht, Hoorn, Middleburg, Utrecht, Nijmegen, and Rhenen.

The exhibition was organized by the National Gallery of Art, Washington, and the Royal Picture Gallery Mauritshuis, The Hague, where the exhibition is on view October 11, 2008, through January 11, 2009.

This exhibition is made possible through the generous support of Greg and Candy Fazakerley and Eijk and Rose-Marie van Otterloo.

Her Excellency Renée Jones-Bos, Ambassador of the Netherlands to the United States:
"The National Gallery of Art exhibition Pride of Place: Dutch Cityscapes of the Golden Age pays homage to the outstanding ability of the Dutch masters. The paintings depict vibrant cities which would soon be paralleled in the new world colony of New Netherland, which later developed into New York" said Ambassador Renée Jones-Bos of the Kingdom of the Netherlands. "The exhibition coincides with the quadricentennial of Henry Hudson's voyage on the Dutch ship ‘Halve Maen' to that nascent colony. As we celebrate 400 years of friendship, we thank the National Gallery of Art for bringing this collection to the United States."

The Honorable Jozias van Aartsen, Mayor of The Hague:
"These cityscapes reflect the power and wealth of 17th century Dutch cities. In particular, the 15-foot-long View of The Hague by Jan van Goyen captures the enormous civic pride. These panoramic paintings were a must-see during the exhibition at the Mauritshuis Museum and I predict the paintings will be as well received at the National Gallery of Art," said Jozias van Aartsen, Mayor of The Hague.

Paintings and maps will allow visitors a closer look at alleys and prominent streets, cluttered canals, locks, gates, busy squares, loading docks, and markets. The paintings portray many scenes and skylines that are still recognizable in the Netherlands of the 21st century.

The origins of the cityscape genre may be traced back to the cartographic tradition in the Netherlands. The Dutch were renowned for their highly accurate and impeccably decorated maps and atlases. Maps that depict city profiles emphasize distinctive skylines dominated by churches and town halls, while bird's-eye views and city plans meticulously recorded the streets and squares that were at the core of urban life.

The exhibition opens with profiles of cities seen from the water, including the National Gallery of Art's Maas at Dordrecht (1650s) by Aelbert Cuyp. A variety of maps and atlases in the next room includes an allegorical map of the Netherlands in the form of a heraldic lion, known as "Leo Belgicus." Also on view is Jan Christiaen Micker's unprecedented oil painting Bird's Eye View of Amsterdam (c. 1652), an adaptation of a map made in 1538. The painting, which resembles a modern aerial photograph, captures the patterns of shadows cast by clouds over the sun-drenched city below.

Holland was by far the most urbanized region of the 17 provinces of the Netherlands, evident in the many proud cityscapes of the largest and most prosperous cities: The Hague, the center of government; Amsterdam, the economic capital; Delft, with its intimate courtyards; and Haarlem, with its dynamic textile center situated near the dunes on the North Sea. The residents of Haarlem were particularly proud of their massive church St. Bavo, which even today defines the central market square. Native son Gerrit Berckheyde painted the church and the market numerous times, but St. Bavokerk in Haarlem (1666) is his most extraordinary depiction of the church. It fills the entire panel, with a remarkably accurate rendering of architectural details.

Jan van Goyen's massive View of The Hague from the Southeast (c. 1650–1651), a profile view of this urban center as seen from the surrounding flat countryside, is enlivened by boats and figures traveling along the waterway leading to Delft. This painting will dominate a room showcasing views of other towns and cities, such as Abraham de Verwer's tranquil and luminous View of Hoorn (c. 1645), a recent acquisition by the National Gallery of Art.

Amsterdam was the fastest-growing city in the Netherlands, becoming a port and trading center of international stature during this period. In 1652 Amsterdam's town hall, which was painted by Pieter Saenredam, burned in a spectacular fire that was recorded by many artists, including Jan Beerstraten. A new town hall (the present Palace on Dam Square), completed in 1665, was considered the eighth wonder of the world. In 1667Jan van der Heyden painted the town hall from an extreme angle, creating the sensation of the viewer looking up at this enormous structure.

Expansion projects in Amsterdam after 1650 established the widely admired and frequently rendered concentric canals lined by stately mansions and warehouses. While the canal views seem realistic, most blend architectural realism with artistic license, as in Berckheyde's Golden Bend in the Herengracht, Seen from the Vijzelstraat (c. 1672).

Many homes in Delft had courtyards that extended the domestic realm to the outdoors. These became the central feature of Pieter de Hooch's paintings, including his fine Portrait of a Family in a Courtyard in Delft (c. 1658). Jan Steen's celebrated painting, Adolf and Catharina Croeser on the Oude Delft (1655), links portraiture with the cityscape. Carel Fabritius' evocative View in Delft (1652) raises many questions about the role of perspective and optics in Dutch cityscape paintings.

Pride of Place: Dutch Cityscapes of the Golden Age is accompanied by a fully-illustrated catalogue with essays by Wheelock and Boudewijn Bakker of the Amsterdam Municipal Archive, as well as Van Suchtelen, Henriette de Bruyn Kops, Jephta Dullaart, Molli Kuenstner, Norbert Middelkoop, and Lea van der Vinde. The catalogue is available from the Gallery Shops for $60 (hardcover) and $40 (softcover). To order, call (800) 697-9350 or (202) 842-6002; fax (202) 789-3047; or email mailorder@nga.gov.

The year 2009 marks the 400th anniversary of Henry Hudson's voyage from Amsterdam to New York Harbor. In September 1609, he first set foot on the tip of Manhattan, which eventually became the thriving settlement that developed into New York City. In 2009, "Henry Hudson 400" will commemorate the legendary voyage with festivals in both Amsterdam and New York. A transatlantic sailing race will connect the cities.