Artists' Films and Videos from Europe. The Last Decade. This event brings the Israeli public into contact with Europe's social and cultural landscape, in all their diversity of history, tradition and culture, bringing together different worlds in a mix of video clips and sound effects. These new forms of dialogue and encounter invite us to communicate with reality in a new way. On show Francesco Vezzoli, Steve McQueen, Jesper Just and others. 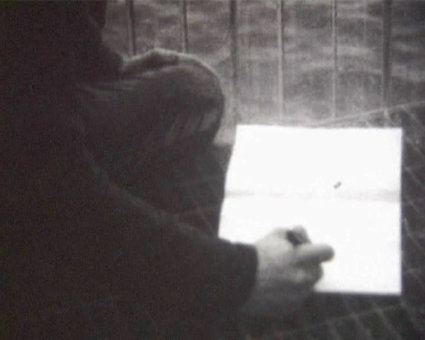 
''SOUNDS &VISIONS” is a collaborative European effort, initiated by the Istituto Italiano di Cultura, in partnership with the Institut Français, the Goethe-Institut, the Institutul Cultural Român, and with the significant support of the Delegation of the European Commission to the State of Israel.
Participating European Union member states include: Austria, Belgium, Bulgaria, Cyprus, Czech Republic, Denmark, Finland, France, Germany, Hungary, Ireland, Italy, Lithuania, Malta, the Netherlands, Poland, Portugal, Romania, Slovenia, Spain and the United Kingdom.


“SOUNDS & VISIONS” brings the Israeli public into contact with Europe's social and cultural landscape, in all their diversity of history, tradition and culture, bringing together different worlds in a mix of video clips and sound effects. Through the universal languages of music and images, scattered fragments can be gathered and recomposed into a possible common meaning. These new forms of dialogue and encounter invite us to communicate with reality in a new way.

The exhibition is structured in sections, each with its own theme, designed to provide visitors with accessible ''itinerary'' through which to follow the exhibition's intended meaning.

Cyprus - Haris Epaminonda – with Tarahi II (2006)
Haris presents a ''mottage,'' not an image, but a collection of cut and edited materials in a reassemblage of parts. The result is a unique tribute to space, opening new paths to imagination and illuminating the present in a different light.

Italy - Francesco Vezzoli – with An Embroidered Trilogy (1997-99)
Vezzoli's three films, each with its own director and featuring its own Italian diva. His presence threads a common link between the films, a trait-d’union.

Lithuania - Deimantas Narkevičius – with Revisiting Solaris (2007)
Narkevicius presents a subjective and contemporary view of the history of Eastern Europe in this film, a tribute to Andrey Tarkowsky, who directed “Solaris” (based on Stanislav Lamm’s book). Forty-five years later, Narkevicius casts the original leading actor and also includes drawings of the noted Lithuanian painter and composer Miklos Konstantinas.

Romania - Mona Vătămanu and Florin Tudor – with Ploaia (2005)
The two artists explore the sudden decline of architecture from its apex. A view of the urban anatomy of today’s Bucharest reveals a painful coexistence of three historical layers: Early Modernism, Modernism in the Communist era and the distortions of the post-1989 architecture.

France - Cyprien Gaillard – with Desniansy Raion (2007)
Gaillard is a multidisciplinary artist whose recent work investigates the concept of entropy, an irreversible change in form, striving for chaos; and the ongoing interchange between chaos and order.

Belgium - David Claerbout – with Sections of a Happy Moment (2006)
Claerbout’s presentation of still black and white photographs and distinctive sound reveals new perspective through the unusual angles from which he looks at moments of happiness. Through a gentle distortion of time alongside the precision of his images, he arouses viewers to a different way of seeing society.

Bulgaria - Kalin Serapionov – with In Addition (2008)
Serapionov explores different social interactions and the borders between the public and the private space, focusing on the two subjects of humanism and materialism as a never ending conflict.

Czech Republic - Martin Zet – with To be a Tool (2006)
A political activist through his art, Zet deals with political issues which the media have thrust into the public sphere. His work conveys instructions on using different parts of our bodies in order to promote awareness and transmit a message.

Germany - Christian Jankowski – with Rooftop Routine (2008)
Jankowski combines different media (literature, video, photography and more) to negate boundaries between reality and imagination, as well as that between private and public, which tend to merge together.

Malta - Vince Briffa – with Body of Glass after Caravaggio (2006)
Both painter and sculptor, Briffa began working with video since the early 1990's. His work draws inspiration from Caravaggio, borrowing the painter’s dramatic light, to give expression to the fragility, impermanence and physicality of the human body, through the camera’s choreography

Slovenia – Nataša Prosenc – with Tomb (2002)
Prosenc opens the “wound” of how the West perceives life, with the body as a “germ of life,” speeding in a linear continuum toward death. The same multifaceted acknowledgment of our experience of life in the “world as it is” shows that life and death simultaneously contain and mirror one another.

Austria: Granular Synthesis with FELD (2000)
This artistic duo is known for positioning the viewer in an extreme vantage point, ''touching'' them with electronic instruments, surrounding and ''thrilling'' the viewer with a wildly intense mix of light and sound.

Poland - Józef Robakowsky – with Umage: Swiatloi! Attention Light! (2004)
Rabakowsky creates iconoclastic films with light as their “chief protagonist.” In his films, light itself forms the means of communication between creation and viewer.

Denmark - Jesper Just with Some Draughty Window (2007)
Just works exclusively on films where the plot is an unfinished story, whose main subject is the interaction between sexuality, love, film and conventional male as depicted in the genre of “film noir.”

United Kingdom - Steve McQueen with Prey (1999)
McQueen uses the moving image to seduce the viewer. He identifies myths inherent in the representation of reality exposing a more fractured notion of experience. Using the camera as the mechanism through which reality is captured, he provides unique portrayals of the human experience.

Hungary - Benedek Fliegauf with Milky Way (2007)
Fliegauf is a film director a sound designer and a set designer. His third film builds on an involved and mysterious plot, meant to show us that the images we see through the lens are but fragments of a far bigger story.

Ireland - Clare Langan with I Gaer (2007)
In her work, Langan blends a slow flow of images of dramatic seascapes with fragile rock music of the Icelandic group Sigur Rós. All visuals create the illusion of huge waves which surround the viewer an experiential dramatization of human frailty against to the power of nature.

Netherlands - Guido Van der Werve with Nummer Acht (everything is going to be alright)) 2007)
Van der Werve, in his constant preoccupation with solitude, alienation and sadness, blended with an absurd sense of humor, presents an exotic location – an endless frozen sea at the North Pole, traversing the frozen surface on foot, with a huge icebreaker close behind. The danger of being run over or being buried under the ice represents the romantic motif of a lone figure in search of the sublime.

Portugal – Ricardo Valentim with Floating Island (2006)
Valentim presents a simple film that resorts to documentary typology combined with home technology (super 8 mm film later transferred to 16 mm). In his film he tries to describe a barge as if it were a floating island, a microcosm in the middle of the Hudson River.

Spain – Marta de Gonzalo y Publio Perez Prieto with Queda poco para lo siguiente (2007)
The artistic duo presents a video-medley to show the use of protest songs as an educational and communicative vehicle, with their work a visual statement. Their statement – that media portrayal of ecological disasters mirrors our global political condition – is one of protest as well.

Finland - Salla Tykkä with Zoo (2006)
Salla Tykkä creates films in which dominates a certain tension, accompanied by a music that reinforces the suspense. In Zoo the movements of the film camera are dramatically echoed by the still camera. This duality is a component of the film.