Monday to Saturday from 2-6 pm

The artist set out to discover the meaning of her first name for the Bamanan, the country's majority ethnic group. In Mali, the word tere refers to a particular part of the personality, a kind of karma. Her drawings, photographs and videos illustrate acts imagined through the mere pleasure of experiencing them as felt by her, simple gestures to a point where they become absurd. While concepts of efficiency and profitability dominate the world, her freedom bursts forth like an unlikely reality. 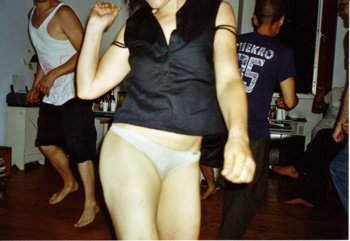 Tere Recarens' exhibition at the Frac Bourgogne results of two recent visits to Mali. The artist (born in 1967, Spain), set out to discover the meaning of her first name for the Bamanan, the country's majority ethnic group. In Mali, the word tere refers to a particular part of the personality, a kind of "karma".

Tere Recarens started exhibiting her work in the early 1990s. Art for her, is above all a precise way of living today. A residency in New York or a show in Tokyo are occasions for opening up a new gap in reality.

Tere Recarens apparently displays superfluity and amusement as primary values. Her drawings, her photographs and videos, illustrate acts imagined through the mere pleasure of experiencing them as felt by her, simple gestures to a point where they become absurd. While concepts of efficiency and profitability dominate the world, Tere Recarens's freedom bursts forth like an unlikely reality. Self-portraiture takes on a deeper collective scope.

Maa Tere Manalen ("someone with a fiery tere") was devised during Tere Recarens's second stay in Mali. After she learnt in Estonia that "tere" meant "good day" (ETC, 2002), she plunged into a similar investigation around "tere" meanings in the animist culture. Willing not to be a common tourist, she constructed the conditions for other possible encounters. Consequently, she had a fabric printed which traced all the motifs linked with the "tere", and exchanged it for photos of all people who helped her.

Through this barter she set up a shared interest, another economy in which quality of the shared experience dominates.

In the exhibition, the film of these encounters is marked by the raw state of the present and by the permanent availability of Tere Recarens. She has elected to show the film in a room made of found and exchanged fabrics with motifs printed symbolizing private or public goings-on, recounting the lives of families and states. Tere Recarens creates a colourful space, a collage of all these reports, somewhere between function and aesthetics, in which she incorporates her own images.

She has also elected to put three pieces together: Fucking Damned Glory, Fucking Glory and Glory — scarves of supporters brought together, a bed cover, and a wall hanging. The title expresses the artist's distance with regard to these objects. They are, like African fabrics, a symbolic form. The scarves of Fucking Damned Glory, produced during her stay in China last year, were also, for her, sources to learn The Chinese language.

Language is a way of meeting people, even when it is not shared. Tere Recarens speaks a free language in different tongues, eliminating all the boundaries. She declares again her sense of freedom. The collage of exchanges in the film, confused by the differing accents, encompasses the essential value represented by the word for her, within the time of the encounter.

The singular nature of artistic activities like those of Tere Recarens resides in shifting something from its artist's experience into the exhibition space, offering it to the visitors. Both experiences cannot be equivalent, but in this partial transposition "the largest part of the story is the one we'll choose to add to it." (Allan Kaprow, L'art et la vie confondus, Editions du Centre Georges Pompidou, Paris, 1996, p.271). (…)

The Frac Bourgogne is supported by the Ministry of Culture and Communication (DRAC: Regional Direction of Cultural Affairs of Burgundy), the Burgundy Regional Council and the General Council of Cote-d'Or.

The Frac Bourgogne is member of the network Platform.