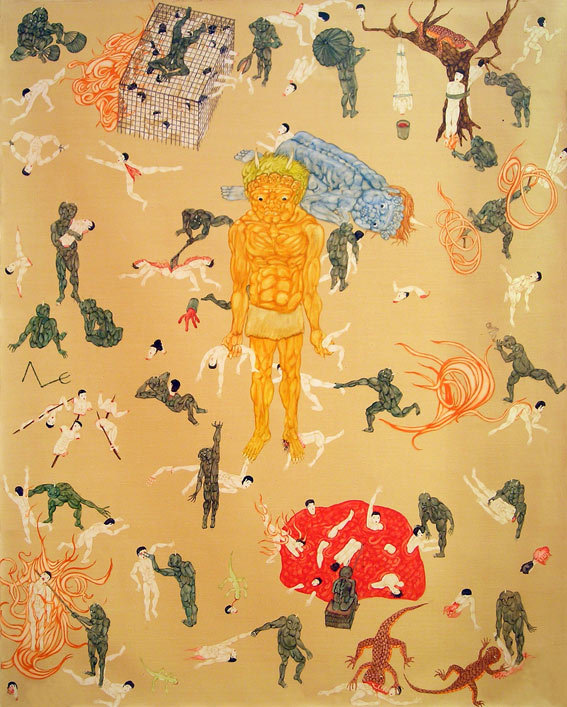 This exhibition, entitled, ephemeral garden, presents Akira Ikezoe’s latest paintings. Featuring nude figures which he defines as angels in bucolic landscapes with animals, flowers, trees and leaves that creates textile-like patterns with heavenly and whimsical air. Without a central focus in the composition, simplified objects are all embedded in a single background color. On closer inspection, Ikezoe gradually unveils his intention to deceive the viewer's eyes through his well-calculated technique and the subject matter: the reality hidden in the pretended innocence.

One can notice easily that the white color of the "angels" is in truth the canvas itself. Ikezoe removes the previously painted background color with solvent. As the result, the outlines yield an extraordinary subtlety. The removed spaces and resulted lines imply ephemeral existence: human beings are not the major players as one day we will all vanish. All the angels are depicted in well-proportioned and developed bodies, giving the idea somehow of our longing as human being for eternal youth or the platonic idea of growth through different lives. The depiction of the angels with humorous facial expressions, holding onto the tress and plants, falling or being sliced to pieces, creates a metaphor for the human condition of attachment to immortality. Through the combination of the removed spaces and metaphorical gestures in the figures, Ikezoe shatters the illusion of eternal existence.

His spare use of space, the flattened representation of objects and decorative elements, and the asymmetrical composition, suggest the influence of ancient Japanese art, such as byobu-e, a folding screen painting that is especially evident in the larger, diptych paintings. Natural elements, such as flowers, plants and birds are often central to the traditional byobu-e, and the same meticulous observation can be seen. Placing each in an aerial perspective underscores something decorous. Ikezoe’s work, in the similar manner, pleases the viewer's eyes, yet his aesthetic is based on his observation of beauty in human suffering and of the contrast of human struggle in perfection of the things in nature.

Combining the traditional and the modern, Ikezoe's work, indeed his world and visionary garden, weaves and bobs between reality and illusion. With softened, bright colors, the facial expressions and actions of the angels obscure harsh reality, which induces even laughter. Ikezoe achieves to embody the very essence of life with a sense of humor and balance all the components in and out with his careful schematics. At once heavenly, yet in a fog of illusion, reality slowly becomes something naked; even so it might still be an illusion. Ultimately, the work becomes more truthful than "reality."

Akira Ikezoe was born 1979 in Kochi, Japan, and today he lives and works in Tokyo. He earned a BA from Tama Art University, and is also a recipient of the Tomio Koyama Gallery Award and the Gallery Naruyama Award at GEISAI #10 in 2006. Ikezoe exhibited his work at Geisai Miami in 2007, as well as in the project room at Esso Gallery, New York, in 2008. This will be the first solo show in the U.S.