The exhibition is named after the movie by Krzysztof Kieslowski. It proposes an ontological thought about the relationship between the human body and its socialized environment. The artworks assembled for this exhibition propose a disturbed physicality, in which physical experience is directly confronted with history or society's insights. The relationship between old and new, body and power, belief and illusion, the individual and society and human and history are questioned through these artworks that have been compiled as a narrative web. 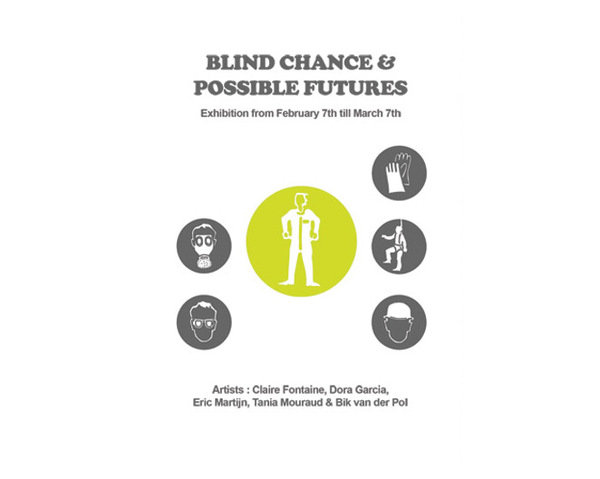 The first exhibition in Nieuwe Vide this year; 'Blind chance and possible futures', named after the movie by Krzysztof Kieslowski, proposes an ontological thought about the relationship between the human body and its socialized environment. The artworks assembled for this exhibition propose a disturbed physicality, in which physical experience is directly confronted with history or society's insights. Dora Garcia's installation 'Intolerable Luz', Tania Mouraud's work 'I have a dream', Claire Fontaine's 'State of Exception' and Bik van der Pol's installation 'The Disappearance Piece' describe the many ways in which humans deal with their environment, whether it may be interacting with it, struggling against it or escaping from it. The artist Eric Martijn will make a direct intervention in Nieuwe Vide's building, by cutting out its walls and turning them up side down to build up a new exhibition space. The relationship between old and new, body and power, belief and illusion, the individual and society, human and history are questioned through these artworks that have been compiled as a narrative web. The exhibition itself will embody the tension of time and space, by letting the artworks disappear little by little, until the exhibition has entirely been removed by the last week, as if nothing had taken place inside.

The exhibition 'Blind chance and possible futures' is thus an experience into the complex relationship between body/mind and space, with the human being as the central point. Deleuze defines the human body as a matrix of flux, which surpasses the simple physical limit of the organic body. The body has experiences in different types of physical and mental relations or extensions toward society. Experiencing an environment thus becomes a way to interact with it and to change it. History and society are therefore, human creations mirroring their creator, containing within themselves an inner power on a collective level. The tensions between a body and its environment become tensions between an individual and a socialized context, where different issues are played, like freedom of action, protest, persuasion, manipulation and knowledge as a political act. Deleuze, and before him Spinoza, draws the attention to the human body, as containing an inner power of action, the one giving rights, leading to actions. When power becomes a collective thing, power can thus turn into the right to override others. Deleuze tried to find an answer to this power relation. When he speaks about the 'Body without organs' as a final state of equilibrium, it has to be questioned then, if this final state, the state of intensities, is not a state of disappearance? This exhibition embodies the tensions between the relationship experienced by humans with society and history.It questions if disappearing is not the in-between space of imagination, in which human escapes all contextualisation to connect with his very deep self.

The movie 'Blind chance' by Krzysztof Kieslowski explores the three different achievements from the life of an imaginary character called Witek. The character takes three different decisions which lead him to follow different plans in life : political, religious or professional. A most interesting point is the way in which Witek's very wish, to leave Poland to go to Paris, is constantly confronted with history and society's own development. History, as Milan Kundera says, appears like a big joke which never brings the character to where he desires to go. The tensions and final confrontation between the individual, history and society appears in its paroxysm, and the only moment when Witek is going to achieve his wish, it ends with his brutal disappearance. Is disappearance a choice of your own or is it determined by the environment?