Humour, exaggeration & anti-authoritarianism in American art. Ever since the sixties, it has had connotations of sensationalism and commercialism. Yet an opposing force of artists emerged who presented themselves as artists' artists rather than mediagenic darlings of the market and the art trade. The artists in the exhibition are: Richard Artschwager, William Copley, Steve Gianakos, Alfred Jensen, Peter Saul, John Tweddle, John Wesley, HC Westermann and Joe Zucker. More than 200 works will be displayed. 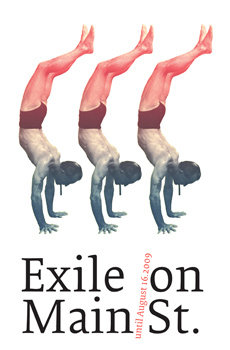 Exile on Main St. is the title of an exhibition of American art. Ever since the sixties, American art has had connotations of sensationalism and commercialism. Pop Art, in particular, appears to fit this image and has lent a great deal of weight to the term 'mainstream'. Yet an opposing force of artists emerged who presented themselves as artists' artists rather than mediagenic darlings of the market and the art trade. Within this headstrong, very soloist group of artists, a figurative tendency in painting manifested itself, which took less notice of the official rules of the game. The artists in the exhibition are: Richard Artschwager, William Copley, Steve Gianakos, Alfred Jensen, Peter Saul, John Tweddle, John Wesley, HC Westermann and Joe Zucker. More than 200 works will be displayed on the entire second floor of the museum.

The artists concerned couldn't care less about any academic positioning. These painters, along with a number of sculptors, see little in an artistry full of brilliant gestures and ideas. They have more in common with the artist as 'bricoleur'; the artist who puts heart and soul into a work that may be imperfect but which lays claim to the essence of creativity and imagination. Their work has deliberately primitive characteristics, and when, nevertheless, it does have a look of sophistication, it is wise to be on your guard. Lustre and tarnish sometimes go hand in hand.

They pass for artists' artist, outsider or underground, or they are saddled with the label Bad Painting, comic strip or cartoon, etc. In terms of modern-day classification in popular music, they could also pass for Americana. However, the classification of these artists is a hopeless task. They have little in common with one another and are extremely individualist in their views and work. So much anarchy cannot be encapsulated in a single term, and nor can so much humour. For this reason, the exhibition consists of six solos from extremely diverse positions and three representations.

The core of the exhibition consists of works by Peter Saul, Steve Gianakos, Joe Zucker and John Tweddle, in dialogue with two 'fathers of the idea': William Copley and H.C. Westermann. They are supported by Richard Artschwager and John Wesley, who both definitively emerged from anonymity relatively recently. In contrast to the artists mentioned above, the two latter artists are represented only by single works. And a special place is given to Alfred Jensen, as the exception among exceptions.

The title of the exhibition Exile on Main St. refers to a double LP by the Rolling Stones from the early seventies. The sleeve shows countless photos of artists and variety performers from bygone days doing various tricks. The music is heavily influenced by the first blues musicians from last century. The LP was recorded in the basement of a holiday home rather than in a studio and is regarded as the best Stones album ever. The sound is not perfect, but this makes the intensity come across even more strongly. The same applies, in fact, to the work of the nine artists in the exhibition.

The exhibition resembles a remake of the 'Club des Incomparables' from Raymond Roussel's Impressions d'Afrique, which was once filmed by Federico Fellini as E la nave va. A complete catalogue will accompany the show, with essays by Robert Storr and Alexander van Grevenstein, and reproductions of all the works presented in the show.

An extended parallel programme will be developed in the fields of arts, literature, music (the phenomenon of singer songwriter by example) and film; with debate and lectures under numerous activities. A series of nocturnes will further take place on Thursdays in the museum, from March to July.

The weekend of 14 and 15 February sees the opening of the exhibition Exile on Main St. at the Bonnefantenmuseum.