Diego Santome's work is profoundly related to his personal context and based in incorporating his vital experience into an artistic language, in the constant search of a link between art and society. Geoplay (Part I): features works by Philippe Decrauzat, Germaine Kruip, Conrad Shawcross, Katja Strunz. 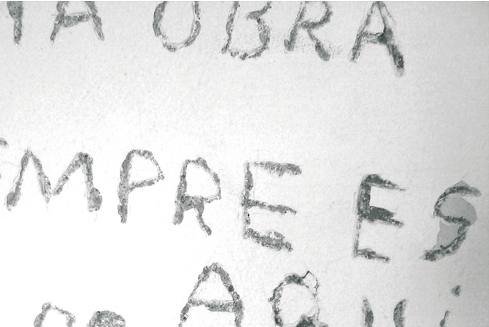 Diego Santomé’s work is not casual it is profoundly related to his personal context. Diego is a multidisciplinary artist who bases his work in incorporating his vital experience into an artistic language, he is in the constant search of a link between art and society and questions the displacement of aesthetic enjoyment into the social interaction field. Throughout his trajectory all of these elements have turned into a common point when reading his artworks.

For this project Diego has worked through minimal stories, simple objects, small actions and almost insignificant acts with an aesthetic associated to minimal and conceptual art. The general idea is based in the current sociopolitical context but in a subtle and quiet way. He does it through basic and simple ideas but with great social background which is what instructs the approach of the show and determines its aesthetics.

With the use of everyday materials, with minimum and simple shapes and with a poetic and symbolic language Diego exposes in a direct way ideas winking to classic art history. The techniques and the choices of the materials are also part of the message the artist wants to communicate: film, engraving, drawing and sculptures in concrete or porcelain are among his proposals.

The piece which gives the title to the show Lo que se esconde detrás de las cosas (What is hidden behind things), a relief carved with chisel and hammer in the wall emulates the classical sculpting technique that removes the excess and reveals the artwork. Through film, a discipline identified for working with something so intangible such as time, Diego displays the film Castillos de Arena (Sandcastles) which directly alludes to the ephemeral nature of things or ultimately to life itself. With the sculpture Losas de Hormigom (Concrete Slab) he symbolizes the heavy load we impose ourselves throughout our existence.

Pilar Parra & Romero is pleased to present the first part of GEOPLAY with the participation of Philippe Decrauzat, Germaine Kruip, Conrad Shawcross and Katja Strunz.

Between the boundaries of modernity and modernism and operating in the gap between conceptual art, abstraction and graphic art., GEOPLAY will draw different meanings and questions of how geometric imagery and abstraction content different perceptions; being the geometric composition as well as the technique and media, vehicles where memory and narrative appear from experiences that occur through different times and spaces.

Another intention of this show is to point out that questions about form continue and advance in a contextual mode, in a way a little alienated from the modernist work. Therefore the concept of the pieces in this show, performs in a more contemporary and radical way.