"I Repeat Myself When Under Stress" offers a possible angle on the various strategies of repetition that artists use to meet the demands of history and the present feeling of impotence. Ceal Floyer, Hans Schabus, and Tris Vonna-Michell are linked by their reflections on Detroit, the city in which the assembly line was invented and whose past and present illustrate like no other. "Black Is, Black Ain't" examines the topic of race in the context of a post-Civil Rights era; it features works by over 20 artists who thoughtfully touch and reflect on subjects such as race, gender, sexuality, representation and language. 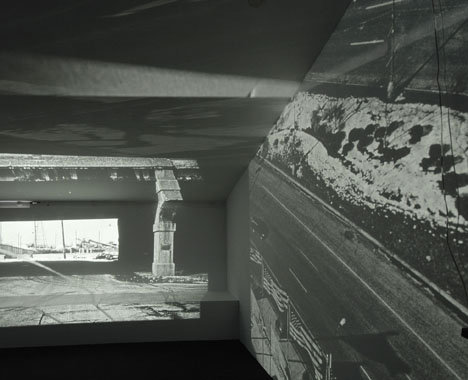 I Repeat Myself
When Under Stress

Art critics have often seen the various methods of repetition and reproduction in art since 1945 as means of shifting the emphasis away from subjectivity. By repeatedly using the same everyday objects and defamiliarising media images by means of reproduction, artists in the 1950s delivered an ironic attack on Abstract Expressionism. The artists who developed Pop Art not only drew their inspiration from advertising and comics, above all they also co-opted the reproduction techniques used by mass culture for their works, or used industrially manufactured materials and forms in order to lend objectivity to their art.

But repetition is more than just a formal procedure: words, objects, techniques that have been duplicated or used serially prompt one to suspect underlying mental or social tensions. Duplication is then used to underline a viewpoint (rhetoric), to achieve a certain goal (redundancy), or to push an already existing idea even further (reproduction). Repetition as a stylistic device in contemporary art may be grasped at first sight as a reaction to the attractions and compulsions of consumption; but the mental constraints of production have also influenced the work of the artist. Likewise, for a long time now repetition in art has also had an existential, material and mental dimension. Although any number of contemporary artists reference modern art and its history from the mid-fifties to the mid-eighties in their work, nowadays historical citations and recursive structures are no longer aimed at shifting the weight of subjectivity. Faced with an over-determined historicism, their task today is to individualize criticism and to mark space.

The title of the exhibition "I Repeat Myself When Under Stress" offers a possible angle on the various strategies of repetition that artists use to meet the demands of history and the present feeling of impotence, as many experience inthe light of growing economic destabilization and the permanent state of war in various parts of the world.

The three artists presented at the exhibition - Ceal Floyer, Hans Schabus, and Tris Vonna-Michell - are linked by their reflections on Detroit, the city in which the assembly line was invented and whose past and present illustrate like no other what, exactly, happens when the constantly changeable state of reproduction is misunderstood, and what potential lies in the consequences.

Ceal Floyer will be exhibiting already existing works at the Museum of Contemporary Art Detroit. The artist is known for her extremely precise interventions in exhibition spaces. Hans Schabus, on the other hand, will create a site-specific installation, and Tris Vonna-Michell will enlarge on an existing work which was first made in response to his encounters with the social history and revolutionary potential of the City of Detroit.

The title of the exhibition is taken from the song "Indiscipline" written by Adrian Belew for King Crimson, but which has done far more than just give the title. It captures the open approach of the curators, who prior to the exhibition took a long look at the particular qualities of the chosen artists' work and methods.

Black Is, Black Ain’t examines the topic of race from a fresh perspective and in the context of a post-Civil Rights era, where discussions of race have shifted from a focus on inclusion and equality as expressed in the dreams of Martin Luther King Jr., to a concerted but open-ended effort to make race socially and politically irrelevant.

The exhibition features works by over 20 African-American and non-African-American artists who thoughtfully and provocatively touch and reflect on subjects such as race, gender, sexuality, representation and language. History and class also feature prominently, offering a unique opportunity to revisit and rethink these important topics of race through the eyes of exceptional contemporary artists.

Friday, February 13, 2009
OPENING NIGHT: BLACK IS BLACK AIN'T and I REPEAT MYSELF WHEN UNDER STRESS
6pm to 8pm: Invited guests' and members' preview

MUSIC: The Sea and Cake with special guests The Raw Truth Ensemble