And Haarlem's Masters from the Golden Age. Haarlem artists played a decisive role in the new development of 17th-century Dutch painting. More than 120 works by artists like Hendrick Goltzius, Frans Hals, Jacob van Ruysdael, Pieter Saenredam, Jan Steen and many others clarify how a free art market emerged and how artists began to specialize in specific subjects. Portraits, landscapes, cityscapes, marines, still-lifes and genre painting are all present in this show. 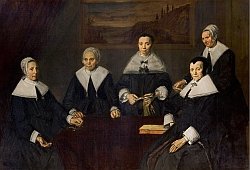 In collaboration with the Frans Hals Museum in Haarlem, the Kunsthalle der Hypo-Kulturstiftung presents its first ever exhibition of masterpieces from the Dutch Golden Age. Haarlem artists played a decisive role in the new development of 17th-century Dutch painting. More than 120 works by artists like Hendrick Goltzius, Frans Hals, Jacob van Ruysdael, Pieter Saenredam, Jan Steen and many others clarify how a free art market emerged and how artists began to specialize in specific subjects. Portraits, landscapes, cityscapes, marines, still-lifes and genre painting are all present in this show. Apart from an extraordinarily generous selection of loans from the Frans Hals Museum - including the two world renowned group portraits of the male and female regents of the old men's almshouse, which have never before been exhibited in Germany - masterpieces of the Haarlem school from many other public and private collections in Europe and the United states are presented in Munich.

The arts in Haarlem experienced a profound transformation in the period from 1610 to 1630. The origins of this change can be traced back to the previous century, when important political, social and religious developments had great consequences for the Northern Netherlands. The revolt against Philip II, which led to the 80-Years War (1568-1648) against Spain, resulted in the establishment of the independent Republic of the United Provinces in 1588, and a rise of power for various cities. These Northern provinces profited greatly from the incessant war activities in the south, as a large number of immigrants arrived, bringing along their experience, capital and business connections. Thus, Haarlem's textile industry flourished after 1590, giving the middle class population an enormous boost.

Artists also had to adapt to the new situation following the Reformation, when the Catholic Church ceased to be a major patron. Instead the city governments assumed this role in part, complemented by the newly rich citizens and businessmen. Less well-to-do burghers also acquired pictures on markets and fairs, whereas commissions for large altarpieces and complex allegorical pictures became rare. New subjects grew ever more popular: the city, its surrounding varied countryside, food and utensils now were worthy subjects of representation. The citizens themselves, from every social class, were recorded in portraits and scenes from daily life.

The new development of genre painting (depicting scenes from daily life) also received incentives from Calvinist sermons and its underlying biblical iconography. Printed images played an important role in the dissemination of new themes, aided by the fact that Haarlem could lean on a long tradition of printing and publishing. The print series by Maerten van Heemskerck (1498-1574) and Hendrick Goltzius (1558-1616/17) had achieved international fame and attracted many artists to Haarlem. In 1583, the painter and theoretician Karel van Mander (1548-1606) settled there, and together with Cornelis Cornelisz van Haarlem (1562-1638) and Hendrick Goltzius founded an academy.

Portraiture was revolutionized by Frans Hals (ca. 1581-1666). While born in Antwerp, he grew up in Haarlem, and his artistic genius set the tone for the entire genre by perfectly expressing movement and the individuality of the sitters. Johannes Verspronck (1606/11-1662) and Jan de Bray (ca. 1627-1697) set this tradition forth.

Landscape painting began evolving, when around 1610 Esaias (1590/91-1630) and Jan van de Velde (1568-1623) as well as Willem Buytewech (1591/92-1624) settled in Haarlem. In the tradition of Pieter Breughel, they studied the surroundings of the city and captured their impressions in drawings. They also produced prints that glorified the picturesque Haarlem countryside. The realist landscape painters Jan van Goyen (1596-1656), Salomon van Ruysdael (1600/03-1670) and Pieter Molijn (1595-1661) gave the Dutch landscape a more naturalistic appearance. And in the following generation, Jacob van Ruisdael (1628/29-1682) dramatized the genre.

Around 1610, Floris van Dijck painted his first breakfast still-life, incorporating the diverse influences from Milan, Frankfurt and Antwerp. Pieter Claesz (ca. 1597-1660) moved around 1620 from Antwerp to Haarlem, and there developed his typical realist still-life painting. Willem Heda (1594-1680) painted in a similar mode during that time, and together they set the tone for all of Dutch still-life painting.

The first specialists in architectural painting were father and son Hendrick van Steenwijck in Antwerp. Pieter Saenredam (1597-1665) worked with the aid of mathematical perspective studies, and became famous for his church interiors. Gerrit Berckheyde (1638-1698) depicted the Haarlem town hall, the St. Bavo cathedral, the city gates, as well as the market square and streets.

Haarlem marine painting can be traced back to Hendrick Vroom (ca. 1566-1640) and his younger contemporaries Cornelis Claesz van Wieringen (ca. 1580-1633) and Cornelis Verbeeck (1590-1637). Their work is the point of departure for the entire genre of the Dutch seascape.