An exhibition of 13 works by an international group of artists who, since the 1960s, have engaged, critiqued, and inserted themselves into official channels of broadcast television and radio. It include single-channel monitor-based videos, video-projection works, photography, installations, and interactive broadcasting projects. "The works in the exhibition remind us that, even with such democratizing new broadcast outlets, the power and control of our traditional media outlets is still held only by a few powerful entities." (Irene Hofmann) 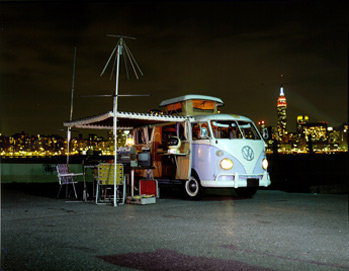 Pratt Manhattan Gallery will present “Broadcast,” an exhibition of thirteen works by an international group of artists who, since the 1960s, have engaged, critiqued, and inserted themselves into official channels of broadcast television and radio. The exhibition will run from February 20 – May 2, 2009 and will include single-channel monitor-based videos, video-projection works, photography, installations, and interactive broadcasting projects.

Work in the exhibition dates from the late 1960s and 1970s, when artists began to broadcast on their own, seeking a parallel system to commercial broadcast television, and when others began to cooperate with progressive public television stations that invited artists to participate in residency programs.

“With works that directly engage, challenge, or subvert the structure and authority of broadcast media, the artists in this exhibition post provocative questions about the impact that radio and television can have in shaping the events of our time,” said guest curator Hofmann. “At a time when YouTube invites us all to “Broadcast Yourself,” the works in the exhibition remind us that, even with such democratizing new broadcast outlets, the power and control of our traditional media outlets is still held only by a few powerful entities.”

The artists in this exhibition work in one of two ways—by creating or inserting themselves in original broadcasts or by appropriating existing ones. Within each of these strategies, there are two impulses followed by the artists—either an iconoclastic, aggressive position, at times intended to question Federal Communications Commission regulations, or a more cooperative and collaborative position.
Examples of broadcasting in the exhibition will include Top Value Television’s (TVTV) Four More Years, a subversive view of the American electoral process featuring irreverent coverage of Richard Nixon’s 1972 presidential campaign and the Republican National Convention; and Chris Burden’s TV Hijack, where the artist took a television interviewer hostage on live television to illustrate the control television has on our lives.

Examples of work that appropriates and re-interprets broadcasts in the exhibition will include video and installation artist Dara Birnbaum’s Hostage, which features archival media coverage from the 1977 kidnapping of the German industrialist Hanns-Martin Schleyer by the Baader-Meinhof group; and multi- media installation artist Antoni Muntadas’ The Last Ten Minutes, which studies broadcasting conventions in different times in history.

Other works from the exhibition include conceptual artist Christian Jankowski’s Telemistica, which features footage from live broadcast footage of psychics on Venetian television stations answering questions from the artist on how his work would be received at the 1999 Venice Biennale; and media and sound performance group neuroTransmitter’s 12 Miles Out, a visual and sound installation that explores the practice of offshore pirate radio in 1960s and 1970s Europe.

Guest-curator Irene Hofmann is Executive Director of the Contemporary Museum in Baltimore. Recent exhibitions include “Cell Phone: Art and the Mobile Phone” and “St. Cecilia,” a solo exhibition of works by Joseph Grigely. Hofmann previously served as Curator of Contemporary Art at the Orange County Museum of Art, where she co-curated the 2002 and 2004 California Biennials and the photography and video exhibition “Girls’ Night Out.” She has organized exhibitions and projects with artists such as Kutlug Ataman, Mark Dion, Jason Dodge, Fabrice Gygi, Iñigo Manglano-Ovalle, and Marjetica Potrc.

The exhibition is the last of the “Politics and Media” series at Pratt Manhattan Gallery. The first, “Party Headquarters: Voting is Just the Beginning,” an exhibition of political art works guest-curated by Eleanor Heartney and Larry Litt, took place from September 25 – November 4, 2008; the second, “Zones of Conflict,” took place November 19, 2008 – February 7, 2009, and was guest-curated by T.J. Demos, presented images of current struggles and blurred the distinction between document and artistic practice. A cell phone audio tour led by the curator featuring commentary from five of the artists in the exhibition will be available on site.