The Art of Architecture. The exhibition focuses on Le Corbusier's unique multi-disciplinary approach, and brings together a wealth of his paintings, films, sculpture and books alongside vintage photographs, original architectural models and interior settings. It also features important works by his collaborators and artistic contemporaries such as furniture designers Charlotte Perriand and Jean Prouve', and artists Fernand Leger and Amedee Ozenfant. 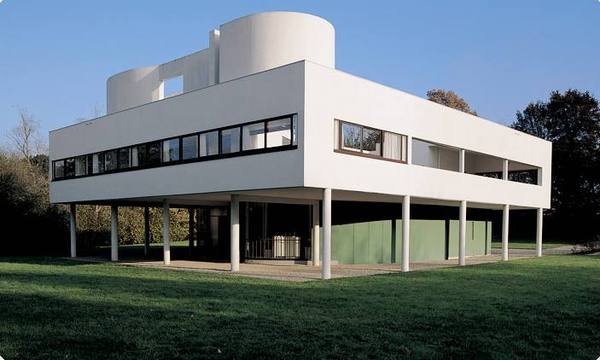 A RIBA Trust/Barbican presentation of an exhibition of the Vitra Design Museum in collaboration with the RIBA Trust and the Netherlands Architecture Institute.

Le Corbusier (1887-1965), widely acclaimed as the most influential architect of the 20th century, was also a celebrated thinker, writer and artist — a multi-faceted ‘renaissance man’. His architecture and radical ideas for reinventing modern living, from interiors and private villas to large scale social housing and utopian urban visions, still resonate today.

Le Corbusier — The Art of Architecture at Barbican Art Gallery is the first major survey in London of the internationally renowned architect in more than 20 years. This timely reassessment charts how the work of Le Corbusier — a pseudonym of Charles-Édouard Jeanneret-Gris — changed dramatically throughout his career. Spanning a period of 60 years the exhibition includes early works inspired by his native Switzerland, the iconic white cubic buildings of the 1920s such as the famous Villa Savoye (1928-31) and culminating in the late works of the 1950s and 60s of which the Chapel of Ronchamp (1950-55) and the buildings for the Indian city of Chandigarh (1952-64) are key examples.

The exhibition focuses on Le Corbusier’s unique multi-disciplinary approach, and brings together a wealth of his paintings, films, sculpture and books alongside vintage photographs, original architectural models and interior settings. It also features important works by his collaborators and artistic contemporaries such as furniture designers Charlotte Perriand and Jean Prouvé, and artists Fernand Léger and Amédée Ozenfant.

Highlights include a monumental mural painting by Le Corbusier from his office in Paris Femme et coquillage IV (1948); a complete original kitchen by Le Corbusier and Charlotte Perriand from his famous Unité d’habitation, Marseille (1947-50); and a reconstruction of his utopian masterplan for Paris (1925).

Presented in collaboration with the RIBA Trust, the exhibition includes key sources of inspiration for Le Corbusier, among them Fernand Léger’s The Baluster (1925), on loan from The Museum of Modern Art in New York. Originally exhibited in the Pavillon de l’Esprit Nouveau, which Le Corbusier designed for the 1925 International Exposition of Decorative Arts in Paris, this is a very rare opportunity for this important work to be seen in London. The exhibition also includes paintings and drawings by Juan Gris, Piet Mondrian and Pablo Picasso among others.

The Barbican Estate and Centre, arguably the most important expression of Corbusian ideas in the UK, provides a fascinating backdrop for this retrospective of Le Corbusier’s work. Seen in architectural forms and concepts from the famous high-walkways and pillars to the rough concrete and rooftop and vertical gardens, the work of Le Corbusier had a significant influence on the Barbican’s architects, Chamberlin, Powell and Bon.

Home to approximately 4000 residents living in more than 2000 flats, the backdrop of the Barbican Estate resonates with another addition to the exhibition, photographs of
Le Corbusier’s interiors. Providing an intimate view of his domestic spaces, they illustrate how families through to wealthy clients inhabited his residences.

The Barbican, Europe’s leading arts centre, celebrates the Le Corbusier exhibition and his dynamic cross-arts approach with its Le Corbusier at the Barbican programme. Featuring concerts, a film season, talks and events, highlights include: a day (7 March 2009) presented by the BBC Symphony Orchestra dedicated to the composer Iannis Xenakis who worked as an architect in Le Corbusier’s studio; sound workshops by electronic artists; tours of Barbican flats, artist’s films and a high-profile debate in the Barbican Hall. The talks programme, presented
in partnership with the RIBA Trust, includes Le Corbusier experts Charles Jencks, Tim Benton and Jean Louis Cohen, and the ‘Architects of the 21st Century’ events series featuring rising stars from the field of architecture and design.

Kate Bush, Head of Barbican Art Galleries, said:
“I’m delighted to be able to present this major survey of Le Corbusier’s work at the Barbican Art Gallery. Not only is it an exceptional opportunity for visitors to experience the many facets of an incredible polymath, but it has a fantastic resonance with the Barbican itself. Le Corbusier was the guiding spirit for the Centre's architects, inspired by his utopian vision as well as later buildings such as Maisons Jaoul, and Unité d'Habitation.

“As Europe's leading multi-arts centre, the Barbican is uniquely able to represent
Le Corbusier's range across many forms of expression, from art and design to music and film. We've devised a dynamic programme of music and events which will thrill audiences, whilst fully exploring Le Corbusier's legacy in the new century."

An accompanying audio guide offers an intimate look at the life and work of Le Corbusier.
Available from the Gallery ticket desk, price £3.