The space of words / Moving Stills

The development of slippages between language and image, between language and space, based, not on equivalence, but on dynamics of heterogeneity, often resulting in their mutual erasure, is the focus of the project. The exhibition is articulated around two directions: the spatialisation of language and the evanescence of meaning. Artists: Manon de Boer, Marcel Broodthaers, Aurelien Froment, Ryan Gander, Raymond Hains, Harald Klingelholler, Dominique Petitgand, Edward Ruscha, Frances Stark, Josef Strau, Tris Vonna-Michell. Concurrently the group show "Moving Stills" invites us to discover new territory, investigating both fixed and moving images via the tensions that motivate them. In the framework of: Mutations II 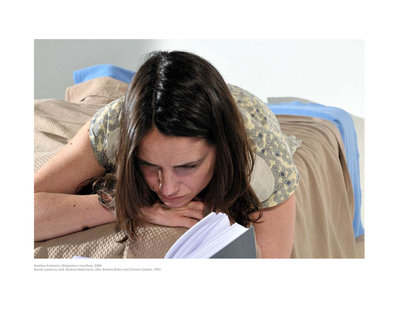 The Space of Words exhibition focuses on the pratice of eleven artists from different generations and explores heterogeneous relationships between words and space. It concerns two principal axes: the spatial presentation of language and the evanes-cence of meaning.

The Space Of Words “For me, words have a temperature. When they reach a certain degree and start to get heated, I am attracted to them... Sometimes I dream that if a word gets too hot it will evaporate and I will no longer be able to read or think it. Mostly I capture the words before they get too hot.” The evanescence of words described by Edward Ruscha in this quotation illustrates the type of relationships that certain artists have with language: the creation of slippages between language and image and between language and space, highlighting not so much equivalent relationships as the dynamics of heteroge- neity, sometimes resulting in their mutual effacement.

One of the sources of inspiration for this project was a conference given in 2004 by French philosopher Jacques Rancière. The Mudam exhibition has borrowed the title. In L’Espace des mots, Rancière takes Marcel Broodthaers’ appropriation of Mallarmé’s book Un Coup de dés jamais n’abolira le hasard (“A throw of the dice will never abo- lish chance”) as a starting point. By replacing the words on the space of the page with black bands that cancel out the meaning, Broodthaers presents the surface of exchange between language and space as a “space of confrontation” based on “a pratice of word and image which underligns their distance.” (Rancière)

The Space of Words focuses on a series of gestures that activate different types of gaps between language and space including effacement, alteration, loss of memory, the exploding of meaning and the transfer of the space of the page to the exhibition space. The common denominator of these gestures may be the central role given to the notion of reading and the process of interpretation, appropriation and editing thus implied. The disappearance of meaning, the silences and gaps that characterize several works in the exhibition thus operate as “spaces for thought” (to re-use Ruscha’s words concerning a series of canvases bearing effaced words).

The exhibition is accompanied by a publication that includes various theoretical writings including a text by the philosopher Jean-Philippe Antoine titled The Word Show, a series of interviews and artists’ projects. Publication is planned for May 2009.

Moving Stills
In the framework of: Mutations II - European Month of Photography

In the context of the European Month of Photography first held in 2004 and which now includes festivals in Paris, Berlin, Bratislava, Luxembourg, Moscow, Rome and Vienna, it was both legitimate and necessary to look collectively at the profound changes afoot in the world, and in particular those taking place in the field of contemporary images. This was the motivation behind the 2006 exhibition entitled Mutations I, an event focusing on technological and artistic change in the area of photography.

The second edition of the event aims to pursue this line of thought on the subject of video, this time exploring the productive relationships that have developed between fixed and moving images and providing a sense of where contemporary art stands in Europe today. Mutations II invites us to discover new territory, investigating both fixed and moving images via the tensions that motivate them. These include an ontological tension between what is momentary and what takes place over time, an aesthetic tension arising from the hybridization of the traditional photographic image and the moving image, and a dialectical tension between the limited display possibilities open to photographs and “the infinity of perceptional combinations within which electronic images can be defined and articulated”, particularly video installation.

A catalogue of the exhibition has been published by European Month of Photography / Café-Crème asbl and realized with the generous support of Alcatel-Lucent.