Mostly It Happens At Night

The project is an experiment and research on how artists present their work in physical and virtual space and starts from the countless visible and invisible networks of the Bijlmer, the many nationalities that live in the neighborhood and the continuous changes of its surroundings. In a ten days full program of lectures, diners, film screenings, debates, performances and music. 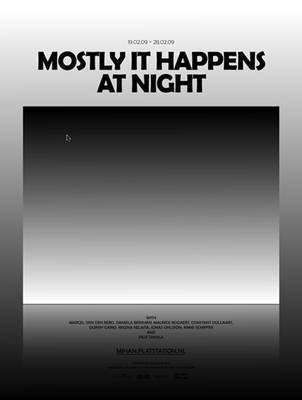 Flatstation presents the first in a series of yearly curatorial projects. The guest curator is invited to work at Flatstation and create a project in Amsterdam South-East, also known as the Bijlmer. Curators Maaike Gouwenberg (NL) and Sandra van Dongen (NL) challenged nine artists to integrate, infiltrate or confront the visible and invisible networks in the Bijlmer. Mostly It Happens At Night stems from the interest in the ever changing neighbourhood, its inhabitants and the myths that belong to this area. Built in the late 60s as a modernist residential area with high-rise apartment buildings and a lot of green areas, the Bijlmer became soon a place that was seen as dangerous and for the poor. After the independence of Surinam, a lot of Surinamese people came over to the Netherlands and found a place to live in the mostly empty apartments.

During the 80s the Bijlmer became on the one hand more and more a free zone but on the other hand it got a stigma as the only ghetto in Holland. Only after the big plane crash in 1992 it became clear that the government should invest in this evidently failed utopia. From that moment the Bijlmer was changed into a neatly, but boring neighbourhood, based on the new ideals in urban planning that every inhabitant wants its own small house and garden instead of sharing space outside. Because the Bijlmer was a free zone in the early nineties, a place where people had to find ways to survive and build their own network, it attracted over 120 different nationalities and became one of the most diverse places in the Netherlands. The stories about illegal taxis, underground networks, shops and restaurants in apartments and a bunch of local myths became one of the starting point for the curatorial project Mostly It Happens At Night. Bijlmer residents seem mainly interested in (rap) music, theatre, dance and the internet. Instead of creating a community art project or sculptures in public space, the curators asked the selected artists to apply the strategies of infiltrating, confronting or integrating on the Bijlmer within the parameters of this project. Thinking about these different strategies and ways to present art in a locality such as the Bijlmer, inspired the curators to think about the documentation of projects on art in public space and about how to open up a local project to a wider (worldwide) audience. All this led to the project Mostly It Happens At Night, which is an experiment and research on how artists present art works in physical and virtual space with the Bijlmer and its countless visible and invisible networks, nationalities and constant changes, as the starting point of their works.