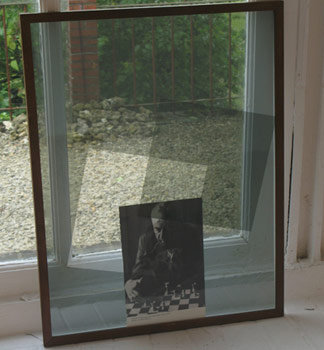 Introducing his film In girum imus nocte et consumimur igni, in 1978, Guy Debord (1931-1994) stated "Nothing could better describe our ineluctable and unrelenting present than this ancient phrase that folds back on itself, letters built like a maze to close you in, a perfect matching of the form and meaning of doom; In girum imus nocte et consumimur igni - We go round in circles at night consumed by fire."

The film deals with the avant-garde period, revolts, friendship and youth, and was to be Guy Debord's last full-length film, an examination of a past time that still needed to be learned from. Indeed, the film ends with an invitation to go back and start again, "à reprendre depuis le début".

Visitors to the exhibition at Rochechouart will find works on all three floors of the Museum not so much linked by a single theme as extending the film's lines of enquiry, a web of connections loosely spun, both an introduction and a conclusion.

The emotional content of Debord's work provides a starting point for exploring feelings generated by the night-time vision of a circle of fire: these range from forgetting the past with "overwhelming passion" (Guy Debord) to perceiving artworks as ruins with a tangible past and future (Le temps en ruine, [Time in Ruins] by Marc Augé). Other recurring themes include rotation (Bruce Nauman, Zilvinas Kempinas) and combustion seen variously as an allegory of loss (Steve McQueen), return (Ugo Rondinone), explosion (Claude Lévëque), resurgence (Maire & Chambaud), energy (Berdaguer & Pejus) or exhaustion (Barry Le Va). Whilst several works adopt a nocturnal tone (Ian Hamilton Finlay, Douglas Gordon), all the pieces in the exhibition conjure contrasting feelings of melancholy and disclosure.

The twenty works on display come from the Museum's own collection as well as other public (Centre Georges Pompidou, Frac Ile-de-France, Frac Limousin and Frac Languedoc Roussillon) and private collections (please see attached list). They include a specially commissioned site-specific work by Mark Geffriaud.

Located at 40 km from Limoges, and 30 km from Limoges's airport, the Rochechouart Castle is perched dramatically on a rocky outcrop. Most of the castle date dates from the 15th century with an inner courtyard and elegant Renaissance gallery with frescoes from the 16th century. In 1985, Haute-Vienne Council established the Museum of contemporary art within its walls. The museum has an exceptional collection of artworks by artists such as Gerhard Richter, Luciano Fabro, Ugo Rondinone, Steve McQueen, Thierry Kuntzel… It includes also the Raoul Hausmann funds, dedicated to the famous dadaist who spent the last 20 years of his life in Limoges.
.
The Musée départemental d'art contemporain de Rochechouart is an initiative of the Conseil général de la Haute-Vienne.This exhibition was made possible through the support of the Minister of Culture (DRAC Limousin).