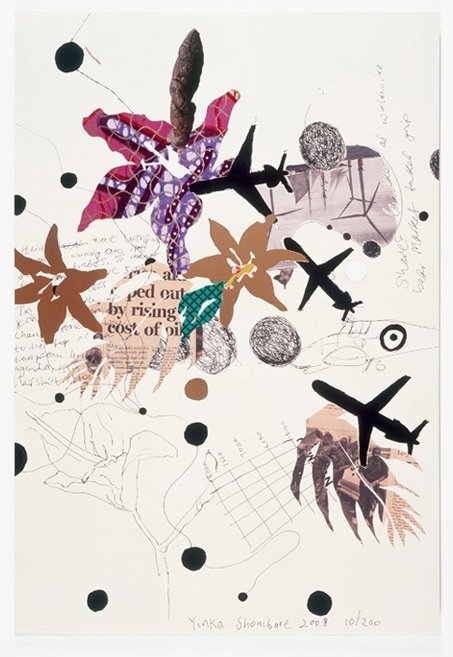 When it was first published in 1726, Jonathan Swift’s Gulliver’s Travels created controversy through its thinly veiled attack on British and European society. Many of Swift’s themes still resonate today. The character Lemuel Gulliver’s role as an outsider travelling to unknown territories and seeing the new worlds through the lens of a middle class educated Englishman, is not dissimilar to the media lens through which we view the global political situation today. The information we consume and the social rules we follow are no less in need of questioning or reassessing, nor is there a clearly defined path more righteous or correct than another.

Commissioned by Dublin City Gallery The Hugh Lane, Yinka Shonibare creates a new sculptural installation based on themes developed in Jonathan Swift’s Gulliver’s Travels. The work refers specifically to wars between the empires of Lilliput and Blefuscu focusing on the question of “egg-breaking” which in Swift’s time symbolised the long series of wars between Catholic France and Protestant England.

In addition to this commission, Dublin City Gallery The Hugh Lane is pleased to exhibit a new series of drawings by Yinka Shonibare, entitled Climate Shit Drawings.

Biography
Yinka Shonibare, MBE (b.1962) is a painter, photographer, filmmaker, and installation artist. His art is influenced by both the cultures of Nigeria, where he grew up, and England, where he studied and now lives. He has exhibited widely throughout the world, and was short-listed for the prestigious Turner Prize in 2004. The artist’s work was included in the African pavilion at the 52nd Venice Biennale in 2007. His numerous group shows include William Hogarth (2006, organized by Musée du Louvre, Paris); War and Discontent (2007, Museum of Fine Arts, Boston); The Fourth Plinth commissioned for 2010 (model currently at the National Gallery, London), and African Art Today: An Unbounded Vista (November 2008, Nelson-Atkins Museum, Kansas City, MO). Shonibare was awarded the prestigious title of Member of the British Empire in 2005.

This is Shonibare's first solo exhibition in Ireland.

Anachronistic in a secular society where almost every object has a defined function and end use, the works of artists Mark Garry, Pádraig Timoney and Hayley Tompkins expose and explore possibilities of contingency and transformation.

The over saturation of information we receive in our hypermodern, post-global era continues to expand and accelerate. As witnessed in the fashions of the entertainment industry, the ever widening and rationalising sphere of technology results in the solidification and stagnation of our avenues of perception.

Frequency raises questions of ethics and value that emerges in the work of these artists and their relationship to aesthetics. It encourages a reappraisal of the established views of reality and provide us with points of departure for alternative frameworks with which we may rethink our perceived knowledge of the world.

Mark Garry’s work stems from a fundamental interest in observing how humans navigate the world and the subjectivity inherent in these navigations.

Pádraig Timoney’s work, informed by the way meaning is constructed in and through art, juxtaposes concepts and languages to create layers of signification which viewers are invited to disentangle.

Hayley Tompkins has become associated with the small, lo-tech, unframed watercolour drawings that are installed, often staged, with the viewer's physical encounter in mind.

The Golden Bough
Grace Weir: In my own time

Curated by Michael Dempsey Head of Exhibitions
26 February - 17 May

Weir’s exhibition is an installation centred on her film, In my own time. The film consists of a series of interlinking episodes that explore philosophical, scientific and cross-cultural attitudes to perceptions of time. Einstein's theories regarding the relativity of time, contentious scientific questions about whether the world’s civil timekeeping may slowly diverge from the rotation of the earth, and an investigation into the potential for time travel are among the topics investigated. These sit alongside episodes revealing how, in ancient societies, before weights and measures were standardised, time and space were regarded in terms of direct experience. Weir draws on Vedic texts which use “as long as it takes to milk a cow” to measure time and “ the range of a stone thrown by a man of medium stature” to measure distance.

Strongly influenced by 19th-century scientific demonstrations, the artist explores these ideas through her own actions and activities. However Weir’s work is as much involved with the qualities and structures of film-making as it is with science. The film explores the connection between the concept of one’s self as a being in time and the sense of one’s life as a narrative. Weir seeks to align a lived experience of the world with scientific understanding, and she is interested in an approach to film-making that acknowledges the necessary subjectivity of all experience. Events in the film are portrayed in a rational, almost documentary style; but oscillate between fact and fiction and between documentary and cinematic illusion.

Forming the rest of the installation are two works, one an animation called Clock shows a dandelion seed head rotating on its stem. The other, Script 1, is the first in a new series of short films, showing the artist creating pinholes in a piece of paper to spell out words, relevant to the filmed activity or making reference to filmic terms, which appear when held up to a beam of light.