The Berlin-based film-maker has produced over a hundred films and installations over the past 40 years: films that in their style and visual language - typical for his installations is the montage of 2 parallel images - do away with traditional genres and alternate between experiment, documentary and essay. 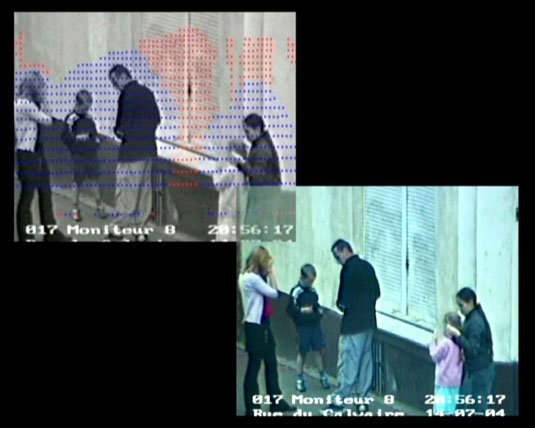 Galerie Barbara Weiss is delighted to present three film installations by Harun Farocki in his first solo exhibition in Berlin. The Berlin-based film-maker Harun Farocki (born 1944 in Novy Jicen, Czechoslovakia) has produced over a hundred films and installations over the past 40 years: films that in their style and visual language – typical for Farocki’s installations is the montage of two parallel images – do away with traditional genres and alternate between experiment, documentary and essay.

Since producing the autobiographical video installation /Schnittstelle (Interface)/ for a group exhibition at the Musée d’art Villeneuve d’Ascq in Lille in 1995, Farocki – who is also active as an author, curator, teacher and as a screenwriter for the Berlin director Christian Petzold – has increasingly shown his work outside the cinema context in art institutions. Important stages were documenta X and documenta 12, where he showed /Stilleben (Still Life)/ in 1997 and /Deep Play/ in 2007. A selection of his video installations will shortly go on view in combination with work by Rodney Graham at Jeu de Paume in Paris. Tate Modern is presenting a retrospective of Farocki’s work in the autumn alongside an exhibition with many installations at Raven Row.

The video installations presented at Galerie Barbara Weiss – /Gegen-Musik (Counter-Music)/, 2004, /Aufstellung (In-Formation),/ 2005 and /Zur Bauweise des Films bei Griffith (On Construction of Griffith’s Films)/, 2006 – are different in character in both form and content: /The city today is as rationalised and regulated as a production process. The images which today determine the day of the city are operative images, control image./ (H. Farocki) In the two-channel projection /Gegen-Musik (Counter-Music)/, which was produced and exhibited during Lille, European Capital of Culture 2004, Harun Farocki makes use of material filmed in Lille and from CCTV surveillance systems to reflect on how a day in the life of a city might currently be depicted.

Here Farocki links to historical city films like Dziga Vertov’s /Der Mann mit der Kamera (The Man with a Movie Camera)/ or Walther Ruttmann’s /Berlin – Die Symphonie einer Großstadt (Berlin – Symphony of a Great City) /(1927), from both of which he also quotes. While Ruttmann and Vertov filmed as if they were on voyages of discovery, today’s film-maker needs to draw on the huge depots filled with images from surveillance cameras on public transport, sewage pipes and sleep labs. Using these contemporary procedures of image production and urban representation Farocki shows a city in a current cross section.

/The diagrams used to help to represent consumer shopping baskets, the pensions deficit or migration are anachronistic. They hark back to nineteenth-century political allegories/. (H. Farocki) In /Aufstellung (In-Formation)/, created for the exhibition project Migration at the Kölnischer Kunstverein in 2005, Farocki shows a collage of statistics, pictograms, bar graphs and pie charts. They are all historical and contemporary diagrams from newspapers, school text books and official documents that provide a highly schematised account of migration within the Federal Republic of Germany. Through his ingenious editing of this material Farocki undertakes a conceptual critique that demonstrates the “touching incapacity of abstraction” (Farocki). At the same time he follows the iconic and symbolic figures back to their origins and investigates them in terms of a subtext that would certainly surprise those who designed them.

/This sequence is like one of animals who only exist in order to be an example for the truth of Darwin’s theory. But cinema Darwinism is neither true nor false./ (H. Farocki) The two-channel video installation /Zur Bauweise des Films bei Griffith (On Construction of Griffith’s Films),/ which was first shown at the /forum expanded /section of the Berlin Film Festival in 2006, displays shot/counter-shot sequences from D.W. Griffith’s silent film /Intolerance/ (1916), among others, on two monitors – much like an experimental setup. These sequences can be interpreted as an aesthetic and political break with early cinema’s narrative tracking shots that would lead to commercial cinema’s prised-open imagery, narrowed perspective and instrumentalising gaze. Farocki exemplifies this development through a juxtaposition of individual image sequences, commented by intertitles, from /Intolerance/ and Griffith’s earlier film /The Londale Operator /(1911).

The strategy of double projection as an extended montage technique enables Harun Farocki to increase the relationality of the image per se. The jumping back and forth that occurs here directs the attention of the viewer, whose immediate task is one of correlation, in several directions at once, addresses questions of simultaneity and disparity and juxtaposes various narrative territories. In his presentation of two images at the same time Farocki reflects on the conditions of production underlying his own films. In 1995, in the film installation /Schnittstelle/ (/Interface/), he had already asked if /viewing/ had to have a purpose. He describes his own editing suite as a /enciphering/ or /deciphering/ machine, keeping open the question as to whether mysteries should be unravelled or preserved.
Barbara Buchmaier

On Saturday March 21, 2009 at 7pm, a conversation with Harun Farocki, Diedrich Diederichsen and Bert Rebhandl will take place at the first floor of Galerie Barbara Weiss.