"So Blue, So Blue - Edges of the Mediterranean" is the title of a major work by Dutch photographer Ad van Denderen, exploring the 17 countries that fringe the sea. "The Roma Journeys": the photographer Joakim Eskildsen travelled through different countries in search of Roma: Hungary, India, Greece, Romania, France, Russia and Finland. The exhibition "Printed Matter - Set 6 from the Collection of the Fotomuseum Winterthur" focuses on small publications, artists' posters and photographic books from the past 40 years. 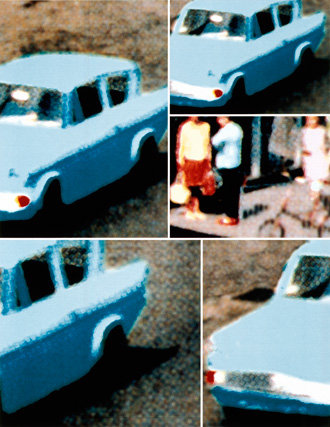 Ad van Denderen
So Blue, So Blue - Edges of the Mediterranean

So Blue, So Blue - Edges of the Mediterranean is the title of a major work by Dutch photographer Ad van Denderen (*1943), exploring the seventeen countries that fringe the Mediterranean. In recent years, this region has become the playground of the wealthy industrialized world. Yet this one-sided view of its azure waters, sandy beaches and tourist resorts ignores the social, economic and political changes that have been wrought by globalization. With So Blue, So Blue, Ad van Denderen seeks to give a rather more balanced view of the Mediterranean region. Addressing the globalisation-related issues that affect all the Mediterranean countries (tourism, ecology, migration, criminality, terrorism, religion, corruption, etc.), he has succeeded in portraying the Mediterranean region as a cohesive and close-knit area in spite of all its diversity.

At the same time, So Blue, So Blue breaks the conventional mould of photojournalism. Ad van Denderen's documentary photographs are a far cry from the lurid and judgemental images of catastrophe that feed the news tickers through the internet. Using a medium format camera, he takes pictures that demand lengthy preparation and research. His photographs are the result of intense and sensitive observation conducted over a period of five years, yet they are never patronising. They give the viewer a glimpse behind the scenes of the Mediterranean playground cliche. The unspectacular things and situations they show all bear witness to the causalities, commonalities and contradictions of a region that, for centuries, has straddled the cultural divides of Europe, Africa and the Near East, revealing the cracks in the social and political structures.

The exhibition was curated by Bas Vroege and organized by Paradox (Edam NL).

Roma, Sinti, Calé, and other groups, often collectively referred to as Gypsies, form Europe's largest ethnic minority. They are scattered far and wideóeach group in its particular situation, with its own language and culture. During the course of history, Roma in Europe have been persecuted, expelled, and even enslaved. Many Roma today still have to contend with discrimination and are met with mistrust by certain population groups.

Between 2000 and 2006, photographer Joakim Eskildsen (*1971) and writer Cia Rinne (*1973) travelled through seven different countries in search of Roma. Their journeys took them from Hungary to India, from Greece through Romania, France and Russia to Finland. They often stayed for lengthy periods of time as guests with Roma families and delved deep into these peopleís worlds. In many places, the route they took and the people they met were a matter of chance and curiosity, while in others, they were able to reach their destinations with the help of relief organisations. Often, it was not possible to plan where their journey would take them or what exactly they were looking for.

The Roma Journeys is a very personal document of these open-hearted and respectful encounters. The exhibition and the accompanying book provide a current, profound insight into the world of the Roma. Eskildsen and Rinne have illuminated many aspects of that world with an intensity that is rarely found.

Printed Matter
Set 6 from the Collection of the Fotomuseum Winterthur

It was only a matter of time before photographers and artists began to explore the aesthetic possibilities of the print media by deploying the visual structures of newspapers and books in their own works. Initially the preserve of conceptual artists such as Ed Ruscha or Hans-Peter Feldmann with their small, unprepossessing publications, now there are many photographers and artists who produce such "printed matter". Michel François and Lidwien van de Ven, for instance, reproduce their photographs in advertising poster format and display them directly on the wall. Other photographers, such as Boris Mikhailov, tend to publish their documentary or narrative photographs in the form of photo books, rather than as individual images.

Some contemporary artists also use the printed image as the basis for their own compositions: Daniele Buetti scrawls famous company logos and messages onto pictures from fashion magazines, while Suky Best uses collage to create fictional tabloid-style visual narratives and Sarah Charlesworth strips the front page photos of the Herald Tribune out of their textual surroundings, thereby highlighting the ebb and flow of interest in daily news images.

Curator: Thomas Seelig. Along with the exhibition the collection brochure "Set 6" will be published.