The Exhibition Formerly Known as Passengers. Morgin uses a mixture of clay, cement, and glue applied over armatures of wood and wire to create true-to-scale objects that appear to be in a late stage of decomposition. Conjuring up a post-apocalyptic vision, the Los Angeles based artist's sculptures are, however, as elegant as they are crude. "Americana: Louisiana": taken by Dewie Floyd and Lt. Mike Silah from aircrafts flying inside the eyewall of the storm, the images provide points from which to contemplate Hurricane Katrina. 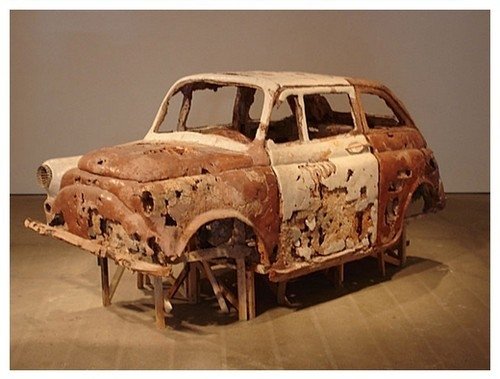 Kristen Morgin uses a mixture of clay, cement, and glue applied over armatures of wood and wire to create true-to-scale objects that appear to be in a late stage of decomposition. Conjuring up a post-apocalyptic vision, the Los Angeles based artist's sculptures are, however, as elegant as they are crude. Morgin uses her background in ceramics to achieve sophisticated textures in the unfired clay, such as the appearance of actual rust in Captain America (2005) included in the Passengers exhibition. Her techniques give the work exceptional complexity while avoiding the refined perfection traditionally associated with the ceramic arts. Captain America, based on an old-fashioned child's pedal car, bares marks of an apparent use with significant dents, a missing wheel, and the faded decorations of stars and stripes. Given the toy car's current state of ruin, these signs of use pertain to an eerie absence. Though she often recreates prized vintage automobiles, Morgin's subjects also include antique carousel horses and an upright piano. These vehicles of leisure and play—relics from an earlier era—are presented as skeletal versions of themselves. In the midst of returning to the earth, they become melancholic reminders of an irretrievable time.

The iconography of American popular culture of the 1940s and 1950s is a frequent point of departure for the sculptures of Los Angeles based artist Kristen Morgin. These highly referential works evoke a sense of nostalgia and melancholy in the viewer not only because they are presented as relics of a bygone era but also because the frequent use of toys and children's ephemera speaks forcefully about youth and the sense of vulnerability that is associated with infancy. Morgin's handcrafted and carefully created universe includes toys, copies of crime novels, board games, comic books and cartoon figurines all made in her signature style using fired and unfired clay, wire and ink or acrylic paint. Instead of aiming for fully realistic replicas of the original objects all of Morgin's works carry the look of relics or remains with corroding surfaces reminiscent of recently unearthed ancient sculptures. Her works appear to be in the process of constant decomposition; some are missing substantial parts of their corpus and are even falling apart while others are deformed and full of pitted holes and cracks. Closer inspection of a large series of works gives the impression that the author is perhaps working through distressing memories of childhood while simultaneously talking about the decaying culture and ideology that has produced these objects.

The piece presented in the group exhibition of Passengers titled Captain America (2005) exemplifies this well. The sculpture is based on a 1950s children's pedal car, which took its design from the vehicle driven by the 1940s super hero Captain America. A patriotic creation, Captain America was a comic hero fighting the Nazis during World War II (the cover of the first issue of the magazine shows him punching Adolf Hitler in the jaw) as well as the Japanese after their attack on Pearl Harbor in 1941. While one could understand Morgin's works as a nostalgic look back at the 'good old days' of Americana, her artworks also imply the desire to leave yesterday behind and to place more attention on the present. For Morgin, it seems that the world is in constant motion, nothing ever stays as it is and therefore it is important to pay attention to the here and now. In addition to larger sculptures of comic heroes such as Mighty Mouse or the spinach-eating sailor Popeye, Morgin has also focused on smaller more intimate objects. An ongoing work by the artist is a table filled with countless knickknacks ranging from covers of comic books, tea and coffee cups, smaller toys to pulp fiction novels. The table is not unlike those found in garage sales around the country offering the potential buyer a large selection of often very personal, yet no longer deemed to be desirable, objects. What is noticeable is that Morgin returns again and again to the world of fiction, comic books, and superheroes and engages us in a discussion about the present by involving us in a conversation about the past. She seems to suggest that our past values, hopes, aspirations and mythology—however corrupted and failed—may yet hold relevant answers for our present.

In July 2005, some six weeks before Hurricane Katrina devastated the Gulf Coast, a Voodoo ceremony took place in the 9th Ward neighborhood of New Orleans.1 Led by priestess Sallie Ann Glassman, a large group gathered to pray and make offerings to Our Lady of Prompt Succor and to Ezili Danto, the Haitian spirit of passion and storms. Their prophetic ritual—an annual 'hurricane hex' intended to protect New Orleans against the coming threat of the storm season—assumed an eerie resonance in its failure.

New Orleans Voodoo developed within the French, Spanish, and Creole speaking African-American population of Louisiana. Through the slave trade, African religious practices became syncretized with Catholicism.2 Today, it exemplifies the rich confluence of cultures and languages that has defined the former port city as entirely unique. New Orleans Voodoo practitioners believe that all living souls come from water and will eventually return to water.3 However, when Katrina floods broke the levees, water was responsible for more than 1,800 human deaths, the displacement of countless more residents, and over $81 billion dollars in property damages.4

The Eye considers the etymology behind the word "supernatural" (above + nature), by presenting two aerial photographs, each depicting a sloping wall of thick white clouds against a blue sky. The sublimity of the photographs is deceiving; they actually depict Katrina itself, which masks any view of the havoc it wrought below as the storm touched ground. Taken by Dewie Floyd and Lt. Mike Silah from aircrafts flying inside the eyewall of the storm, the images provide points from which to contemplate Katrina's supernaturalism in terms of verticality, visuality, power and so many unseen hierarchical forces at work.

Also on display is a particular gris-gris, a Voodoo amulet worn during a hurricane hex for its affective properties. Voodoo has been summarily misrepresented in the media, stigmatized as a malicious occult practice, rather than a positive conglomeration of monotheistic and polytheistic diasporic faiths. While Louisiana is considered one of the most paranormally active states in the U.S., if haunted, no specter weighs as heavily as the criminal lack of response from the Bush administration. Louisiana was summarily abandoned, left to fend for itself in calamity. In that sense, this exhibition symbolically secedes from the curatorial union of Americana. Rather than diverting from the obvious to explore the obscure, this exhibition seeks to position Katrina not as a little-known history, but as an overlooked present.