Jean Miotte in the 70's / The Kinetic Universe of Pol Bury 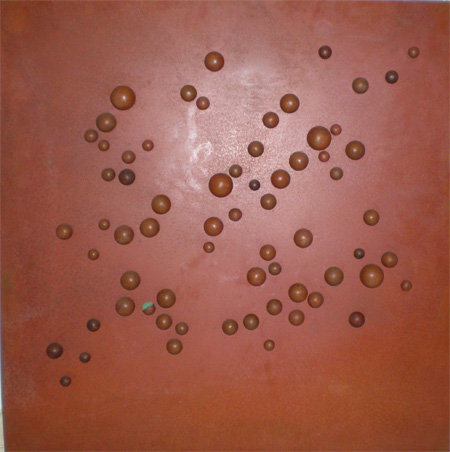 Jean Miotte in the 70's: The Empty Space

The works of Jean Miotte are characterized by a directness in which his expressive gesture acquires a key role. He transforms the canvas into a vibrant surface, an area of tension between colours in which a considered formal consciousness as well as artistic spontaneity leave their imprint.

His dynamic expression is pure energy, pure movement. The intellectual appreciation of motion gives rise to a metaphysics of painting embracing a complex relationship to experienced reality and hence an enduring statement of rational and philosophical position.

The creative power of the individual who is responsible only to himself, which developed out of existentialism, has been maintained in Jean Miotte right up the present day. In his works he has turned the deeply depressing experiences of the Second World War into tolerance and watchfulness.

In 1971 Jean Miotte stopped painting in oil and began using acrylic paint. This technical detail was attended by important changes to the artist's work. Acrylic paint dries quickly and requires fast and vigorous action; at the same time, it allows the artist to work in larger formats. Jean Miotte appreciated this new freedom and the opportunities of the medium. In his works from the 1970's, he concentrated on movement and rhythm and exercised great restraint in color. His approach to space and emptiness on the canvas changed and he equilibrated rhythmic brushstrokes of color with dominant areas of white paint or raw canvas. "I strive for a good balance", said Miotte, "the balance between moving form and empty space".

Even after 40 years, his works are vital and credible. As is evident from the exhibitions held recently, the energetic autonomy of design and the quest for authentic expression in informal art are of lasting fascination. It is among the major treasures of the 20th century, radiating its power into the 21st century.

The Kinetic Universe of Pol Bury
Time, Motion and Surprise

Pol Bury was born 1922 in Haine-St. Pierre, Belgium and died in Paris in 2005. Sculptor, painter and designer, he is widely recognized as the leading exponent of Kinetic Art (art that incorporates real or visual movement).

Bury worked and lived mostly in Paris. He also made several long trips to the US and studied at the Academy of Fine Arts in Mans. Initially influenced by the surrealist movement, he joined the group Rapture. In 1949 he co-founded the CoBrA movement and stayed with them until 1951. He then gave up painting and dedicated himself to Kinetic sculpture. In 1952, after meeting and encountering the work of Alexander Calder, Bury joined the group Art Abstrait.

Bury used various techniques, such as painting and surface textures to create sculptures utilizing light and motion. The artist developed an aesthetic of slowness; surprising, seemingly hazardous movements within the objects add time and sound as formal elements to the sculptures. For example, the operating noise of electromechanics, the tic-tac and clanging of wood and metal elements are audible in his works. The sculptures develop a bizarre life of their own which also reflect the artist's intense sense of humor.

In 1964 Pol Bury created the cinetisations which related his philosophy of motion to the art of photography. Bury was also a poet and with the Belgian editor Andre Balthazar created the series of artist books The Daily Bulles in collaboration with other artists like Pierre Alechinsky.

The works of Pol Bury have been shown in numerous exhibitions in Europe and in 1972 a large retrospective dedicated to the artist was shown at the Museum of the University of Berkeley and at the Guggenheim Museum. Recently, a retrospective of his works was shown in several European Museums.

The Chelsea Art Museum
556 West 22nd Street, New York, NY 10011
open Tuesday through Saturday 11am to 6pm
Thursday 11am to 8pm
closed Sunday and Monday
$8 adults, $4 students and seniors, free for members and visitors 16 and under