Yellow and Green: the first presentation from the MMK's existing portfolio focuses on the outstanding examples of Pop Art and Minimalism that stem from the former Stroher Collection. These works enter into an exciting dialog with pieces produced in the subsequent decades as well as new acquisitions from recent years. The Double exhibition series will launch with a show consisting of "Objects" by Reiner Ruthenbeck that were first displayed at the 1971 in Kabinett fur aktuelle Kunst, Bremerhaven. 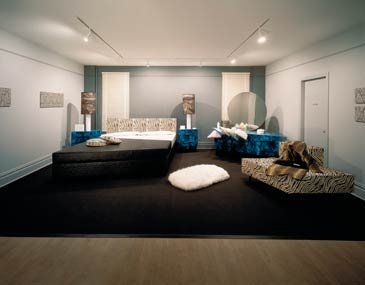 Over the next few years, an intense and programmatic focus on the collection of the MMK Museum für Moderne Kunst Frankfurt am Main will highlight the function and importance that a museum of contemporary art carries today, as well as underline the opportunities it enjoys compared to other kinds of art institutions and the art market.
Today, the numerous masterpieces in the MMK Collection and their countless different facets go well beyond what the MMK could possibly show at any one time. In order to make accessible the numerous facets of this collection to its public, the MMK will concentrate on different focal points and thematic approaches, which will be presented in regular exhibitions over the next years. In this process, works from different periods and varying media will be juxtaposed. The MMK will function not only as an institution for exhibitions and discourse, but also as a venue for an active art historical and comparative understanding of art.

The first presentation from the MMK’s existing portfolio focuses on the outstanding examples of Pop Art and Minimalism that stem from the former Ströher Collection. These works enter into an exciting dialog with pieces produced in the subsequent decades as well as new acquisitions from recent years. In addition to some of the oldest works in the collection by Robert Rauschenberg and John Chamberlain, and classics of American Pop Art such as Roy Lichtenstein, Claes Oldenburg, George Segal and Andy Warhol, the exhibition shows positions in contemporary art as exemplified by Thomas Bayrle, Peter Fischli & David Weiss and Jeff Koons. Works by Thomas Demand, Aernout Mik and Tobias Rehberger suggest a strong reference to the world of everyday images and the media, illuminating how relevant such subject matter was, not only to Pop Art, but still is to practicing artists today. Alongside minimalist works by Donald Judd, Dan Flavin, Lee Lozano, Fred Sandback, Blinky Palermo and Charlotte Posenenske we are showcasing pieces by Martin Boyce, Steven Parrino and Franz West from the 1990s. A particular highlight of the show is James Turrell’s “Twilight Arch”, which we are re-installing for the first time in a decade. Works by Teresa Margolles, Santiago Sierra and Markus Sixay illustrate how the formal aspect of Minimalism extends deep into the language of contemporary art. Moreover, the MMK is displaying new acquisitions, such as a slide projection by Armando Andrade Tudela and a light installation by Angela Bulloch, both of which are on view in the museum for the first time.

The Double exhibition series will launch with a show consisting of Objects by Reiner Ruthenbeck that were first displayed at the 1971 in Kabinett für aktuelle Kunst, Bremerhaven. The MMK acquired this prime example of Concept Art in 1993 as the Frankfurt version, which bears the name "Umgekippte Möbel/Upturned Furniture".

Alongside Gerhard Richter, Sigmar Polke and Blinky Palermo, Reiner Ruthenbeck is considered one of the most influential of his generation. He studied in the early 1960s under Joseph Beuys at the Düsseldorf Academy of Art and was also a member of Beuys’ master class. With his participation in Harald Szeemann’s legendary show "When Attitudes Become Form" in Berne in 1969, Ruthenbeck established himelf on the international scene, too.

Compared with his early works from the 1960s, which rely on a repertoire of forms that, by absolutely reductionist means, carefully and precisely strikes a balance between the different sculptures, the "Objects" of 1971 truly seem to have become unbalanced.

The title clearly defines Reiner Ruthenbeck’s work: In the room, several tables, chairs, and a recliner have been distributed at random, seemingly by some unknown force or perhaps upended during an aggressive performance. Here, middle-class life as symbolized by customary furnishings seems to have got out of kilter. The result is a new, unexpected gaze at the appearance of the things that are scattered wildly here and are no longer held in place by a rigid system. Reiner Ruthenbeck thus wittily undermines the regulated order of everyday life, which he quite literally sends reeling. He showcases objects in an unusual way and thus the presence and function usually associated with them.

Since then, Ruthenbeck has made other versions of this sculptural and site-specific ensemble, each adapted to the respective conditions. No minimum number of items of furniture is ever set. What is decisive is not the design of the respective furniture items, but the concept. The focus is on the way the items are staged, the presentation of utilitarian objects in space – indeed, one could speak here of static action. Seen as an image, the room is also comparable with a 3D cubist composition. In the case of the items Ruthenbeck chose for the show in Bremerhaven, he opted for plain utilitarian furniture.

And the pieces for the Frankfurt version were again primarily chosen for their functionality. Yet the configuration strips them precisely of that quality. The chaotic, strange spatial structure is unsettling, but also encourages viewers to break out of staid ways and possibly restructure their own lives.