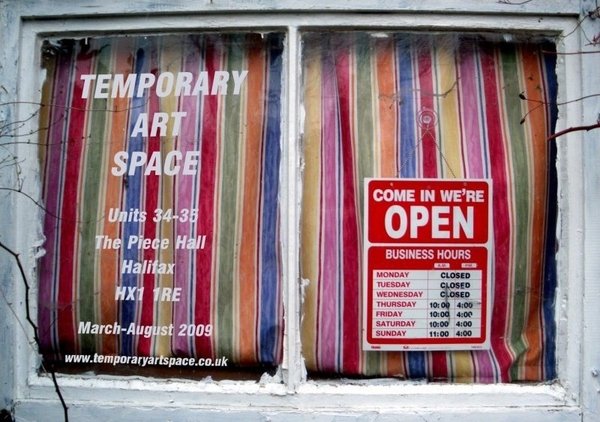 Temporary Art Show is the inaugural exhibition at Temporary Art Space in Halifax, following on from the hugely successful exhibition of the same name in neighbouring Huddersfield. Fifteen artists will exhibit painting, drawing, print, video, sculpture and installation works, responding to the broad theme of "temporary."

Rachael Allen
"A bittersweet life.
A one-way journey.
Are you travelling comfortably?”
“Miniature model-making provides a stage for the exploration of mortal existence, where the fine-line separating birth and death highlights our vulnerable condition as human beings. The miniature vehicles emphasise the uncomfortable reality that is the brevity of life; before long, the vehicle that drives one from birth to youth is replaced by the vehicle that drives the unfortunately disabled to their inevitable death. To be seduced by these unique miniatures is to enter a diminutive world where annihilation rubs all around; just like looking in the mirror."

Georgia Boniface
"Georgia Boniface's background in fashion and textiles is brought to bear on canvas. Traditional appliqué techniques combine with a powerful compositional and graphic sensibility to bring about a vivid, hand-made, ephemeral and controlled explosion of military hardware, pin-badges, British flora and fauna, icons of punk rock and modern art."

Kevin Boniface
"Kevin Boniface is an artist/writer. He has exhibited irregularly at galleries around the UK. He writes a diary all about being a postman in Huddersfield which won some awards and was published by Old Street Publishing last year as Lost in the Post; The Independent said it would be "a cult classic" and a man on the Amazon website said it was "Utter Rubbish". Kevin has also made a zine called Compact News which Tom said he liked. Chris at work once said he thought Kevin might not really be a very good artist and that he might just be out to shock people for the sake of it; Kevin told him to go f**k himself.

Alice Bradshaw
"I work with a wide range of media and processes involving the manipulation of everyday objects and materials. Mass-produced, anonymous objects are often rendered dysfunctional caricatures of themselves, addressing concepts of purpose and futility. I create or accentuate subtleties, blurring distinctions between the absurd and the mundane."

Edward Cotterill
"Edward Cotterill makes work that although uses basic materials and skills operates on a sub fantastic level; striving not to be "beautiful" (creating beauty out of the mundane) but less beautiful than the individual objects/materials used. An inverse notion of the term greater than the sum of its parts occupying a world where it is lesser than the sum of its parts, which paradoxically lends the work a skewed aura of beauty. Highlighting how the world is put together."

Julia Douglas
"Julia Douglas is an award winning visual artist based in Scotland. She ponders the relationship people have with the objects they put in their home and aims to tell a story about the inhabitant's life by playfully transforming these items into mixed media sculptures and prints. In her work "Series" she has used a beautiful, hand painted, ceramic Willow Pattern plate as a model and has created a series of cheap, disposable copies. Though the pattern is the same, the serial plates physical attributes are distinctly inferior; they are flimsy paper rather than tactile ceramic; to be disposed of rather than treasured; and printed, rather than hand painted. They reflect a common corruption in commercial practice today."

Francis Elliott
"My work is primarily aimed at trying to pinpoint vectors relating to thought processes, emotions and imaginary spaces; filling in the gaps between experience and assumptions that we all use to make sense of the world around us. I'm not interested in creating anything new; rather, stripping back the existing world until the mechanisms of each object's implications are revealed. From my earliest works on canvas to recent blackboard drawings, paint has always been an essential part of my working process; most of my recent work has used paint as a physical surface, to conceal or disrupt common objects, thereby forcing the viewer to question the implications of the original. I have always been fascinated by space, time and movement; the different ways to perceive time, for instance; Garden uses rust to stretch time, leading to living paintings that change imperceptibly but continuously; whilst One Measure removes the hour and minute hands of a normal watch, leaving only an infinite sea of seconds behind."

Karl Jeron
"Phenomena in contemporary life are the focal point of KH Jeron's artistic interest. He sees his work as an investigation of popular social issues. Often he collects material from public sources like Google, Wikipedia or TV. This material is enacted by small robotic vehicles or compiled into videos. Jeron is interested in shifting the recognition by subtle interventions."

Natalie Kay
"My fascination with the fleeting everyday, the dynamics of observation and the anonymity of the individual in society, drives my artistic practice. Within this I explore the relationship between myself as an artist and the observer and audience in relation to those being viewed."

Milk, Two Sugars
"In a world of increasing mediocrity and as an antidote to the culture of manufactured individuality we offer the world the only viable alternative, "Milk, Two Sugars.” Milk, Two Sugars is a visual notebook published every month in a limited run of one hundred copies. These are distributed to a varied group of artists, writers, galleries and potential groupies. The visual partnership of Bob Milner and Tom Senior began in March 2006. Coming together through desperation and fear of obscurity, the notebook is the starting point for a wide selection of work in a range of media. A love of drawing and a desire to communicate the deficient wisdom and combined wit of two exceptionally unfunny people is the motivation to create an array of visually stunning and ultimately forgettable images. We have fun. We enjoy what we do. It isn't important where we fit in to contemporary culture, in all honesty we really don't seek a place at the table. We'd be happier under the table tying shoelaces together or standing before the court of the "glitterarti-farti" with a microphone and some really horrible and pointless jokes. We'd prefer to be heckled by them than invited to dine. We don't like artists that much."

Ian Smith
"I have a studio at Westgate Studios in Wakefield where I am currently making sculptures and films. The boots are a part of an installation work, which also features a chair and a tyre that have been similarly altered by the addition of matches. As a result of using so many matches I have also acquired hundreds of matchboxes which I have used as building blocks in subsequent installation pieces."

Jared Szpakowski
"My work deals with themes of identity, purpose, humour & satire and currently involves working predominantly with installation, print and bookmaking. There are certain objects that obsessively persist and recur within my practice such as boxes, ladders, eggs and voyeur holes. My use of personification is both whimsical and quirky but also has the possibility to be read in serious and personal contexts and often involves an almost sinister suggestion of catastrophe. The formulation of ideas, direction and composition is usually dictated purely by the space itself, be it outdoors, in a derelict area or gallery and work is frequently documented and then abandoned to its fate and to its discovery."

Josie Faure Walker
"Destroying the sculptures, paintings, drawings and collages I make has become a necessary ritual. Very little survives, and I find that positive. Much art is talked about without having ever been seen in the flesh, and the direct experience of object and viewer is replaced with whimsically worded press releases or curatorial statements and poor online reproductions. I enjoy these contradictions and questioning them has become a thread connecting my studio practice. Aside from this and the desire to recycle everything that I make into new work after being photographed, the subject matter and material of my work is all over the place."