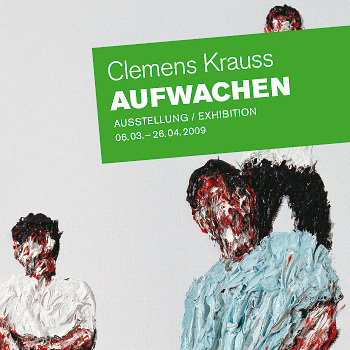 Haus am Waldsee presents the exhibition "Waking Up" with the Austrian artist Clemens Krauss from 6 March to 26 April, 2009.

With "Waking up" Haus am Waldsee presents for the first time within an art institution the Austrian painter Clemens Krauss who lives in Berlin and received his education in London. Having met with international acclaim, the artist will spread his work which sits between performance and painting across the lower floors of the house. What is more, he will take up residence on the upper levels for the duration of the exhibition. This extraordinary form of display enables the audience to experience the creative process and share with the artist his privacy, his art collection as well as his source material in audio-, video- and book format.

At the age of 30, Krauss works on the notion of the contemporary person as a performative embodiment of social and mediated experience. He conceives the human body as a metaphor for society, religion, politics and sexuality – as a projection screen. The artist, who was born in the Austrian city of Graz, employs extreme perspectives to frame the body. While his images are reduced formally to spots of colours against a white background, their content appears charged with sensuous power.

Krauss' images of isolated bodies on canvas are always underlain with an almost invisible linguistic layer of communication which is based on diary entries. This layer subtly emphasises the question of the individual being thrown into a transitory world. In his most recent works, Krauss separates colour-bodies and support. He puts his thickly painted bodies like exchangeable shells in glass cabinets. This generates a sense of the storehouse as well as the infirmary.

Krauss has dedicated himself exclusively and highly successfully to art since 2001. He studied at the Vienna academy, in London and Berlin. After a six month period in Tokyo as well as studies in Australia and Brazil, he returned to Berlin in the summer of 2008 laden with impressions of these diverse cultures.

The unusual mode of presentation enables the viewer of "Waking up" to witness the coming to be of an artistic œuvre and track the generation of a painting from personal preferences: movies, music of choice, furniture and works by other artists such as Hermann Nitsch or Franz West. Video- and audiotapes may also be used by the audience. Apart from a broad overview of his work up to the present Krauss will develop an in situ mural which will not yet exist when the show is opened and will no longer be visible by the time of the finissage. On opening night, Krauss will repeat a performance enacted first in London in 2005 during which the artist will conduct individual consultations of members of the audience.

A catalogue in German and English accompanying the exhibition will be published by Nicolai Verlag, Berlin, ISBN 978-3-89479-535-1.

Children Workshops:
Saturday, 21 March and 18 April, at 2 pm
Admission: with registration only