Looking Forward. This presentation will offer the first comprehensive retrospective on Anthology Film Archives, chronicling the organization's unparalleled work in the preservation, exhibition, and study of film as art over the last four decades. 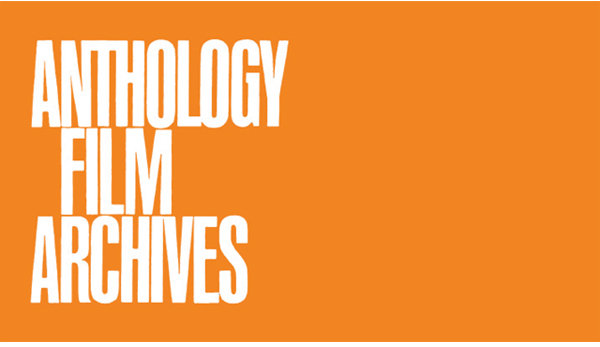 Maya Stendhal Gallery is honored to present Anthology Film Archives: Looking Forward, which will be on view from March 11 through April 18, 2009. This presentation will offer the first comprehensive retrospective on Anthology Film Archives, chronicling the organization’s unparalleled work in the preservation, exhibition, and study of film as art over the last four decades. To commemorate this landmark exhibition, Martin Scorsese will present Anthology founder Jonas Mekas with the newly released Treasures IV: American Avant-Garde Film, 1947-1986, from the National Film Preservation Foundation.

Jerome Hill, filmmaker, artist, and philanthropist, will also receive tribute in this exhibition. As co-founder and sole patron during Anthology Film Archives’ first years, his financial and creative support was central to its establishment. Hill’s philanthropic legacy also included contributions to Film Culture magazine, Cahiers du Cinéma, and Film-makers’ Cinematheque, making him one of avant-garde film’s most important figures. Hill won an Academy Award for his documentary Albert Schweitzer (1957); and the Library of Congress honored his autobiographical work, Film Portrait (1971), by selecting it to the National Film Registry in 2003. Film Portrait will be on view in conjunction with a selection of Hill’s drawings and paintings.

The formation of Anthology Film Archives began in the mid-1960s when filmmaker and programmer Jonas Mekas envisioned a permanent home where the increasing number of new independent and avant-garde films could be viewed regularly. In 1968 Mekas aligned with filmmakers Jerome Hill, Peter Kubelka, and Stan Brakhage, and with film scholar P. Adams Sitney, to formulate plans to create the first museum wholly devoted to film as art. Anthology Film Archives opened on November 30, 1970 at Joseph Papp’s Public Theater with a specially designed 120-seat theater, a library, and offices. Within a year of Hill’s death in 1972 the organization relocated to 80 Wooster Street. In 1979 the need for more adequate space led Mekas to purchase New York City’s historic Second Avenue Courthouse building. Years were then spent raising funds for the building’s renovation. Anthology Film Archives opened to the public at its present location of 32 Second Avenue on October 12, 1988.

It is difficult to imagine what the state of avant-garde and independent cinema would be today without the singular contributions of Anthology Film Archives. A member of the Association of Moving Image Archivists and the International Federation of Film Archives, Anthology’s committed work has resulted in the restoration and preservation of over 800 films by artists such as Maya Deren, Stan Brakhage, Kenneth Anger, Bruce Baillie, Robert Breer, Helen Levitt, Joseph Cornell, Marie Menken, Michael Snow, Bruce Conner, Jordan Belson, and many, many more. Its Essential Cinema Collection consists of over 300 films that define the history and aesthetic achievements of avant-garde film, and which Anthology continues to screen on a repertory basis. Unseen Cinema: Early American Avant-Garde Film 1893-1941, a 7-DVD collection produced by Anthology, was the result of a restoration and preservation project that surveyed over 150 works, many considered lost or destroyed. The Jerome Hill Research Library contains thousands of books, periodicals, and files on filmmakers, critics, historians, festivals, and venues, and an extensive collection of film stills and frame enlargements. Central to the promotion and appreciation of film as art, Anthology presents over 900 film programs to the public each year; loans copies of preserved films to museums, festivals, universities, and cinematheques around the world; and maintains a publications program issuing books, catalogs, DVDs, and a quarterly film schedule available to audiences on an international level.

Screening throughout the gallery will be a special selection from Anthology Film Archives’ permanent collection of works by Jonas Mekas, Marie Menken, Hilary Harris, and others. Photographs will document landmark events and key figures, including John Lennon and Yoko Ono at the legendary Invisible Cinema; Jonas Mekas with Andy Warhol and Michel Auder at Anthology’s 1970 opening party; the Second Avenue Courthouse’s architectural restoration; as well as filmmakers Stan Brakhage, Peter Kubelka, and Arthur Penn, among others. Original posters, programs, catalogues, publications, newsletters, and notes will illustrate Anthology’s mission and the monumental scope of its activities over the last 40 years. Also on view will be tickets and brochures designed by Fluxus founder George Maciunas, and vintage film equipment from the early cinema era.

The exhibition will be accompanied by a catalogue containing essays by film scholars P. Adams Sitney, Amy Taubin,and Robert Haller.