Works from the collections Monk and Haubrok, curated by Jonathan Monk. The result is not just an exhibition, but a collection of shared memories and stories: Take, for instance, Christopher Williams' works "Buren". He does point out the peculiar similarities, a recurring theme that can be observed in many of the pieces he has chosen from both of the collections. 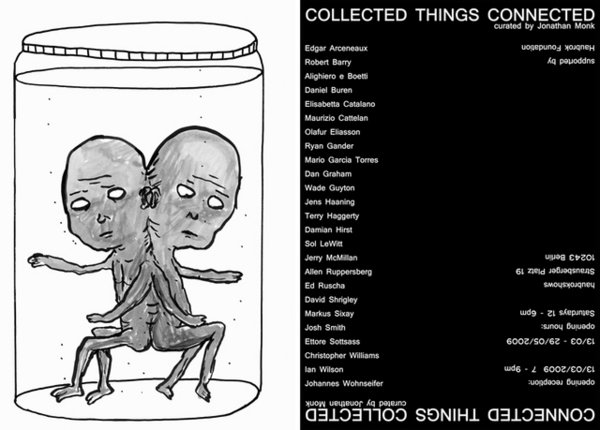 The fact that Jonathan Monk has gathered the works of other artists comes as no big surprise. Even less than the fact that our collections share certain similarities. Asking Jonathan to pick some of his and our works and assemble a joint exhibition therefore was an obvious choice. It's just a logical progression, especially considering the 10-year-contract between the artist and the collectors.

The result is not just an exhibition, but a collection of shared memories and stories: Take, for instance, Christopher Williams' works "Buren". At the Art Basel Jonathan tipped us off about these and we went on to purchase one. Eventually Jonathan tried to buy that work himself, only to find out that he had to settle for the black and white version.

Another prime example are the works of Jerry McMillan, who came to prominence by taking pictures of Ed Ruscha. The photographies on show were purchased independently. However, Jonathan owns exactly one more of McMillans works than we do. The same goes for Ruschas famous early books from the 1960s and 1970s. Our collection includes only one of the "Crackers" - Jonathan managed to amass 19.

Both of us have acquired a "Stripes"-wallpiece. Jonathan's was made by Danile Buren - ours was made by Terry Haggerty and is currently installed in our dining room in Düsseldorf. For the new exhibiton Terry agreed to redo his work in order to match the different dimensions of our showroom. Is this still the original?

Monk's and our collections feature some of the works of Markus Sixay. Our piece, "I am prepared for you", consists of 150 kg of confetti. Sixay had it delivered and subsequently dumped on the floor at his very first exhibition (thereby following Felix Gonzales-Torres' "Bonbon"-pieces). Monk contrasts it with an airy beach ball of Sixay from his own collection. Together these two works form a rather unusual scene from the beach.

Would Ian Wilson - arguably one of the most radical Conceptual Artists - relish the sight of his two "Circles" being placed face to face, thus enabling them to comunicate? Well, Jonathan didn't ask him. He does, however, point out the peculiar similarities - a recurring theme that can be observed in many of the pieces he has chosen from both of our collections.